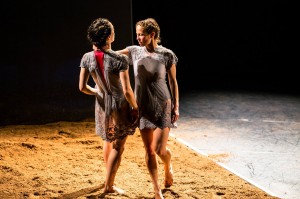 Seattle-based duo zoe|juniper brings their collision of video and stage magic with dance to FringeArts this spring. Choreographer Zoe Scofield and visual artist Juniper Shuey create an enchanted environment for mysterious dance rituals that explore identity and self with the Philadelphia premiere of BeginAgain. This piece is set to run April 9, 10 and 11 at 8 p.m. at FringeArts’ waterfront headquarters, 140 N. Columbus Blvd. (at Race St.). Tickets cost $25 and are available by phone at 215-413-1318 or online at FringeArts.com.

This work questions multiplicity of self, memory and perspective of relationship to one’s self at any singular point in time. The complex connection between Scofield’s choreography and Shuey’s visual design reveals an intrinsic truth about self and those aspects of humanity that unite us. zoe|juniper’s collaborative team of designers creates an accumulation of video, light and sound playing with vanishing points and the expansive and diminishing nature of the performance space.

“More than most contemporary dance, each of their full-length works seems like a fully realized world with its own laws, personalities, and forces of nature. Our urge to decode them is a kind of compliment,” said Brenden Kiley in The Stranger.  The Seattle Times added, “The blending of their talents has produced some of the most impressive dance/visual spectacles to come out of Seattle in recent years.” 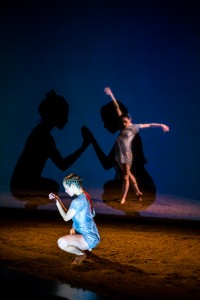 About zoe|juniper
The company is driven by the idea of mythologizing the experience of our senses; creating performances and visual art that challenge the viewer’s perception of time and perspective as well as allowing our work’s intention to be spacious enough for empathetic experiences to emerge. Their work realizes and exists in the state of liminality- the sense of being ‘in-between’. By working across different disciplines, we filter our sensual experiences into the mediums that best embodies a facet of the myth our overall concept is based on. This project spans dance performance, photography and sculptural video and performance installation. Within these, we are designing experiences that all maintain the idea of liminality; the thresholds of conscious/unconscious, action/reaction, before/after and cause/effect. While this idea of mythologizing serves as the trajectory of our work, our concerns are with relaying non-linear “story-ness”, originating and distilling significance from rigorous physicality, calibrating the dialogue between the mediums in which we work and literally creating tangible artifacts from the performance within the installation and calcified memories within the photography.

The collaboration between Juniper and Zoe is defined by having visual, sonic and choreographic designs work in tandem so that aesthetics and form become seamless. The purpose of their collaboration is to immerse the audience in the conjunction of the physical and fantastical realms.

2013 Stranger Genius award winner and Princess Grace awardee zoe|juniper is a Seattle based dance and visual arts team that has been described as a “crazy dream you just can’t shake” by Karen Campbell of The Boston Globe.  Co-founded by choreographer Zoe Scofield and visual artist Juniper Shuey the company creates stunning dance, video installations and photography works.