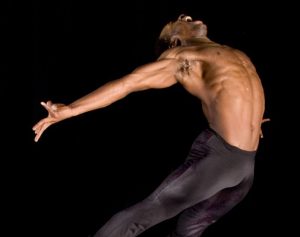 Tommie-Waheed Evans presents the debut performance of Waheed Works’ Botch, on April 10th and 11th at 8pm at the Painted Bride Art Center in Philadelphia. Botch is the culmination of an ongoing exploration of lightness and darkness through movement. Melding techniques from modern, jazz, and ballet into one emotionally-charged vocabulary, the choreographer unpacks the ways in which darkness can be a means of enlightenment.

Evans began grappling with the dichotomy in an earlier piece, Nearing Light, during his tenure at Philadanco. Now, with nine dancers, variously from PhilaDanco and Eleone Dance Theater, as well as music from Stevie Nicks, Ben Frost, and Kanye West, he once again investigates the ways in which a wrong turn can lead to the right destination.

Evans joined Philadanco in 2002 after studying at both the Ailey School of Dance and Complexions Contemporary Dance. Since then, not only has he become one of the company’s major choreographers, but he’s also become a mentor in his own right, teaching various master classes at local studios like Philadanco, Eleone Dance Company, Dance Arts, and University of the Arts, and abroad.

“I love what I do,” he says. “and I love how diverse, supportive, and electric the dance [Philadelphia] community has been. Philly really has it’s own aesthetic, especially in terms of contemporary and modern dance. ” In 2006, Evans founded his own dance project,  Waheed-Works. Botch will be the first official Waheed Work to grace the Bride’s main stage.

Painted Bride is no stranger to Evan’s work, however. His choreography has appeared at the Bride  on numerous occasions via Philadanco’s yearly production, Danco on Danco. “[The Bride is] my second home,” he says, “I’ve always been in love with the space at Painted Bride. It’s intimate, but it still feels like a theater. My work really suits the space.”

The world of Botch is one that continues to grow, says Evans. The 70- minute piece’s title arrived out of a series of Pina Bausch-style reflection sessions with the dancers, during which Evans invited the dancers to immerse themselves within the context of the piece and apply it to their own lives. Viewers can expect the experience of Botch to be “transcendent,” says the choreographer. “I want people to feel something in their souls” he says. “[Botch] will be more than a dance performance. The audience will be submerged into a world full of disorder, dismay and chaos.”