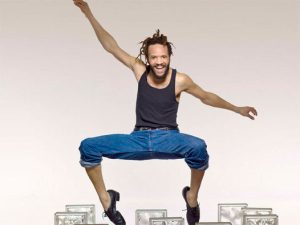 By Kat Richter for The Dance Journal

As a tap dancer and long time fan of Savion Glover, I was too star struck to do much more than nod when the legendary hoofer announced, some five years ago, that he wanted to do a show completely in the dark.  I was living in London at the time, and Glover was in the middle of his Bare Soundz run at Sadlers Wells.  Thanks to an old friendship with one of his dancers, I’d been invited back to the hotel where everyone was staying in Islington.

I couldn’t imagine a show completely in the dark.  Sure, as a teacher, I spend hours trying to get my students to understand that tap dancers are musicians as well as dancers, but movement—visible movement—is still an important part of the equation.  Nonetheless, I just sat there and nodded my head; this was Savion Glover, after all.  In an attempt to sound supportive, I relayed a story I’d heard about a blind child who was learning to tap dance but secretly, I doubted such an idea would ever fly.

Fast forward (it’s PIFA, after all) to Saturday night at The Academy of Music.  Glover’s dream of doing a show completely in the dark has come true.  Almost.  The stage has been transformed into a starry night sky complete with fiber optics and large black sheets that run the entire width of the proscenium.  Glover stands on top of a platform surrounded by speakers, some ten or twelve feet about the stage.  Those of us seated in the orchestra can’t see his feet but I don’t mind.  Firstly, this will force me to focus on the sounds just like that blind student I’d heard about; secondly, there’s no way he’s going to spend the entire show standing on a high tech box.

Except he does.  Let’s ignore the fact that Dance Space, which is meant to represent 3.8 billion years ago, is made possible only through the use of twenty-first century sound effects.  Let’s also ignore the fact that there are no other musicians, no other dancers and no theatrical paraphernalia of any sort to shake things up.  It’s a bold move, simultaneously self indulgent and risky.

Like a child in a science museum, Glover begins to play.  He experiments with ripple effects and echoes, allowing the space between his sounds to stretch out into silence then collapsing them together into tiny crashes of rhythm.  He crawls sideways in his signature combination of perfectly alternating balls and heels, inching around the platform, before exploding into an expansive set of crossing pullbacks, raising his arms as he hauls his body into the air.

Much has been written about Glover’s hunched over, sideways, seemingly anti-audience stance but it’s not that he’s refusing to perform, it’s that he’s in the zone.  He’s playing the floor with his shoes, not like a drummer but as a drummer.  He taps an imaginary drumstick as he drops the toe of right foot against the floor and slips so effortlessly from one time signature to another that you don’t even notice unless you’re listening very, very closely.

What’s most incredible about his performance is that he keeps right on going for the better part of an hour, turning rhythms inside out until he gets tired of them and latches onto something new.  And these aren’t your run-of-the-mill times steps and paddle rolls— these are steps that don’t even exist in other dancers’ vocabularies yet Glover weaves them into playful climaxes and powerful crescendos with a mental and physical stamina that seems somehow more than human.

He’s a true genius in every sense of the word.  Unfortunately, his genius is lost on most of the audience.  At one point I stop craning my neck and start counting the various entrances, exits and re-entrances of the folks seated in front of me.  I recognize a student in the front row.  I’d nominated her for a special award at a dance competition a few months ago but eventually, she and her entire family get up and leave.  I like to think they’re headed upstairs for a better view from the Family Circle but to my left, a young boy has fallen asleep and folks begin to check their cell phones.

I can’t imagine its easy being Savion Glover.  When Sadlers Wells bills you as “the world’s greatest tap dancer” and the majority of the tap community considers you its undisputed leader, you can’t very well do a show in the dark and expect people to be happy about it—not with an obstructed view and tickets priced at $65.  That said Dance Space brought out the most diverse audience that I’ve ever seen at The Academy; here’s hoping that next time their engagement will be more of a priority.