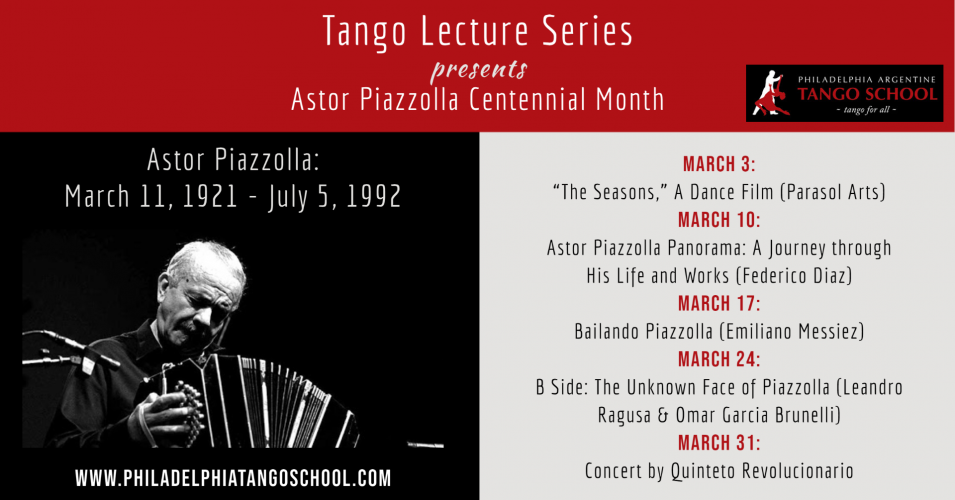 Above all other composers, Astor Piazzolla revolutionized tango music and brought it to the modern world stage. His inspiration and creativity in fusing tango music with elements from classical music, jazz and other genres, forged a new and unique style of music, Nuevo Tango.

Astor Piazzolla was born on March 11, 1921 in Mar Del Plata, Argentina. At the age of 17, Piazzolla joined the Orquesta Tipica of Anibal Troilo, which became one of the greatest tango orchestras of all time; there he grew into the role of arranger. During this period, Piazzolla developed an interest in composing classical music. He parted ways with Troilo and formed his own Orquesta Tipica, where he began to experiment with fusing classical music compositional elements into tango. At this time, he also began studying jazz and drifting away from tango altogether.

In 1950, Piazzolla won a grant to study composition in Paris with the legendary Nadia Boulanger. He was intent on being a Classical composer, but Ms. Boulanger saw his talent in tango composition and convinced him to use his talents in that genre. This became the crucial turning point in Piazzolla’s life and changed tango music forever. Piazzolla went on to create a style of tango unique in its accessibility, enjoyed all over the world by listeners of Classical music, jazz, tango and many other genres.

Piazzolla returned to Buenos Aires and resumed his work in tango music. Forming new groups, the most famous of which was the Quinteto Nuevo Tango, his creativity flourished. He pushed tango music to new heights, composing transformative works such as The Four Seasons of Buenos Aires, Adios Nonino, Libertango, Five Tango Sensations, Oblivion and Milonga del Angel to name a few. He died in 1992.

Since March 2020, the Philadelphia Argentine Tango School has offered a Tango Lecture Series on Wednesday nights as a way of keeping tango alive during a time when it is not possible to gather to dance. Throughout March 2021, the series is devoted to celebrating the Astor Piazzolla Centennial. Offerings include a full-length dance film, “The Seasons,” by Parasol Arts (set to Piazzolla’s “The Four Seasons of Buenos Aires”); three lectures on Piazzolla’s life and work, each presented by different lecturers; and a concert by Quinteto Revolucionario, whose members won the 2019 Latin Grammy for “Best Tango Album.”

The event details are as follows:

• March 10, 2021 – Astor Piazzolla Panorama: A journey through his life and works. A lecture presented by Federico Diaz.

• March 24, 2021 – B Side: The Unknown Face of Piazzolla. A Conversation between Leandro Ragusa & Omar Garcia Brunelli.

About The Tango Calendar

At the beginning of each month get your own copy of our FREE eNewsletter delivered to your inbox with all the latest upcoming Tango events. Click here to subscibe!

Add The Tango Calendar To Your Wordpress Site