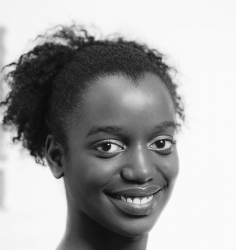 Dance Artist Edwina Thertulien was born to Haitian parents in Philadelphia, PA, and was raised in Bear, Delaware. She began her dance training at 10 years old. Under the direction of Dara Stevens-Meredith, she studied Ballet, Modern, Jazz, and African dance at Christina Cultural Arts Center in Wilmington, Delaware. From there she continued on to study at Dance Creating New Stars (DCNS) Summer Dance Intensive under Dara Stevens-Meredith and LaCeda Nelson. Now a graduate of Temple University, Edwina has received her BFA in Dance. In her education at Temple University, she has studied under Lauren Putty, Kyle and Dinita Clark, Scott McPheters, Kip Martin, Kun Yang-Lin, Laura Katz, Joe Gonzalez, and others. She has performed works by Kyle “JustSole” Clark, Dinita “Queen Dinita” Clark, E. Leon Evans II, Shawn Lamere Williams, Tony Rhodes, Troy Powell, Dara Stevens-Meredith, Tommie Waheed Evans, and others. Edwina has participated in performances such as American College Dance Association, Dumbo Festival, International Association of Blacks in Dance, Temple University MFA Thesis Concerts, J Chen Project, and others. Edwina is currently a performer with Valerius Productions and is an apprentice for Eleone Dance Theatre. She has received the Frances Bowden Scholarship from Temple University and the DCNS Summer Intensive College Scholarship. By creating and dancing in work, Edwina hopes to fulfill her mission in dance, which is to use elements of her own lived experience to catalyze new discoveries.

by Edwina Thertulien for The Dance Journal Myzrie House was a full-length work presented as a Reflection:Response Commission through the Institute of Dance Scholarship at

by Edwina Thertulien for The Dance Journal On Thursday, March 25th, Leila Aisha Jones invited us to The Porch along with nia love and Fred

Hope Boykin – Redefine US from the INside OUT

by Edwina Thertulien for The Dance Journal Hope Boykin’s Philadelphia premiere of Redefine US from the INside OUT occurred on Thursday, March 11, 2021, at 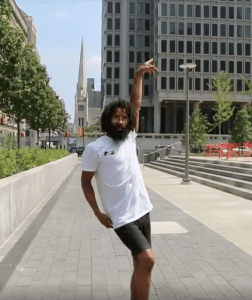 by Edwina Thertulien for The Dance Journal Experiencing firsthand the Waacking class at Urban Movement Arts, I learned extensively about the mechanics and the correct 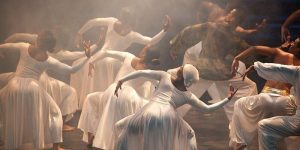 by Edwina Thertulien for The Dance Journal “Seven! Step eight and one!” That was the voice of Eleone Dance Theatre’s Rehearsal Director Dara Meredith as