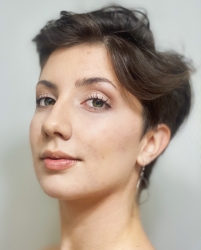 A body occupies a sloping, mossy cluster of boulders as if it were one of their own. This body, draped in the shadow cast through leaves of breeze-blown trees, is Kalila Kingsford Smith, performer and choreographer of Creature: A Movement Meditation. In her short film, Kalila occupies an elemental body, a “creature” that moves and molds itself through landscape after landscape. Over a wet, river-soaked rock, she leans and lopes as if she were the watery ripples themselves. In the grass, Smith balances; feet planted, then hands planted. Gravity moves as she climbs her legs up the trunk of a tree. Her hands are curiously sensitive; her gaze is soft. She cloaks herself in seaweed that drools itself back into the water. She moves through streams of light and patches of tree bark.

Not far into the film, “make your way to a natural element that calls to you,” white text over a rippling, dusk-blue background asks me. I ignore it (at first).

The film fades as I sit in my living room, cushioned by a white couch and a yellow pillow behind my spine. These are the events that follow: Turn the screen off. Pack a small bag. Slip my shoes on. Walk to the riverbed. Notice the hot glitter dancing on the water. Return to Smith’s website to find an audio-led movement meditation. Earbuds in my ears. Press play. Sit down – cross-legged – in post-dewy grass.

This time, Smith guides me through awareness of my body’s sensations. “Start to feel the ground,” Smith narrates. The grass tickles. I recall the tiny pink flowers to the right of my left foot that look like minuscule bunches of grapes. I notice how feeling occupies my fingertips as I place them on the grass. I notice how the breeze billows past the skin on my face, and I close my eyes.

Instead of watching Smith’s body mold around varied landscapes on a screen, I listen as the audio guides me through a narration of the film I had witnessed minutes before. I sit, looking out onto the Schuylkill River, and as if a stage, it acts as the backdrop for this new performance orientation.

Like double exposure, I watch an imagined projection of Smith’s Creature over the Schuylkill. “She sits and slowly brings her hands to her face, still tense…” the audio recounts, “she slowly arches up and back, drops back down towards the rock, then arches up again, rocking side to side as she looks up to the sky. The scene fades.” The creature dives in and out of the sun-soaked water before me. Boulders appear and disappear, and moss manifests out of thin air.

This imaginative river-stage that sits before me shapeshifts as Smith narrates, “the scene changes,” again and again.

As sensation unfolds through this movement meditation, Smith ushers her viewers to orient themselves to themselves. The work moves into boundless possibility when guided through imaginative practice and navigated through somatic inquiry. I breathe a little deeper; I wonder when the leaves will fall; I sigh, and the wind picks it up.

Performance, as an act, cultivates feeling. Kalila Kingsford Smith asks her viewers to be a witness through and with those very sensations.

Jorgie Ingram (she/her)
Journalist & Contributor at The Dance Journal
Jorgie Ingram is a movement artist, writer, photographer, and maker who grew up in New Hampshire and is based in Philadelphia. She is an alumna of The University of The Arts with her BFA in dance and a minor in creative writing, where she graduated Summa Cum Laude. Through a multimedia lens across a realm of platforms, Jorgie orients her work through movement, sensation, and somatic practice. She invites her viewers, readers, and witnesses to consider how a piece resonates with them; how it moves through their body. Her work is practiced with care through magic, deep listening, and reaching towards sustainability.

0 replies on “Review of Creature: A Movement Meditation”