While live performances are scarce by mid-summer, it provides a perfect time to catch up on your reading with a cool dance book. Here are three recommendations focused on dance theory, history, and practice that offer inspiration on those lazy, hazy dog day afternoons. Plus, a bonus of a soon-to-be-released to keep in mind for this fall. 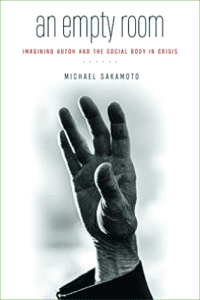 Michael Sakamoto’s ‘An Empty Room’ explores butoh’s history, theory, and artistry. Sakamoto is a renowned international dancer, choreographer, educator, and historian of what he calls “the multi-generational butoh diaspora.

He tells the history and biographies of legendary Japanese butoh masters and the artform’s-emergence in Japan after WWII. Sakamoto surveys the aesthetics, history, theory, and practice and development vis-à-vis other choreographic, visual art, and performance aesthetics. Butoh, like other dance-theater genres, is often thought of in limited terms.

Butoh has roots in ancient theatrical rituals of Japanese theater and ancient traditions. Its chaos, contradiction, and crisis re-emerged in the 50s as an artistic manifesto in response to the apocalyptic human devastation of nuclear attacks on Hiroshima and Nagasaki in 1945.

Is it a personal dance purgatory so private that spectators and even the dance artists can only guess at the symbolism? Is it a state of mind or a state of body, is it a spiritual realm or dance mysticism, dance as a historical document and cryptographic dance or revelatory or nihilistic form only realized in performance?

Sakamoto objectively views every aspect of his creative engagement with the art form. Now with a vital mission in contemporary dance, he writes as his artistic pursuit, “to begin adequately recognizing the long-undervalued histories of, and still growing efforts to make space for, the global spectrum of female, queer, racialized, and disabled bodies in butoh, and to theorize their futures….”

“What matters to me are the particular forces that led to butoh’s inception and initial phase, how and why butoh developed along certain principles and routes, and how it might expand its future as a mode of trans-disciplinary dialogue between individuals and society.“

Who can resist a chapter (‘The (Never) Ending’)’ Sakamoto has this exchange with choreographer Rennie Harris when he asks Sakamoto, “How do you define Butoh?” to which Sakamoto replies, “chaos, contradiction, and crisis” and Harris quips “Just like hip-hop.”

Harris and Sakamoto brought the two art forms together in their concert duet ‘Flash’ in 2014 at the Painted Bride in Philadelphia and then toured around the country.

Sakamoto’s illuminating discourse on practice, history, and creative challenges of butoh, inspires, as does butoh’s mysteries, enigmas, and theatrical alchemy as experienced and studied by a master of the form. 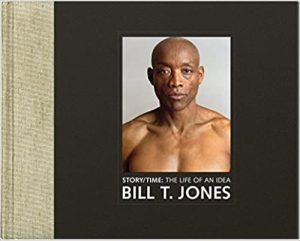 Rare are books about the creative choreographic process of a specific work that genuinely conveys the experience as it plays out on stage. Choreographer Bill T. Jones gets close with his innovative 2014 book ‘Story/Time.’

Jones ambitiously seeks to deconstruct his work even as he questions his own questions. A concept in creative homage and response to John Cage’s 1968 piece ‘Indeterminacy’ in which random artistic decisions are made in real-time. Improvisation, chance structure, and coherent dance-theater memoir are admittedly an aesthetic risk and, for Jones, artistically urgent.

The book is a visual record of the Story/Time performances at Princeton University and Montclair State University. It is part of Jones’ ongoing effort in “desiring to communicate directly and still (it) remains indeterminate in much the same way the dances I create for the stage do.” In other words, Jones jumps off his creative cliff to see what happens.

Jones orchestrates the music and dance libretto as is a series of personal stories and fabulist remembrances narrated by Jones and performed by ten dancers.

Examination of the inspiration and the pitfalls of processing his ideas. A process that makes him doubt everything about what he believes and is doing. He questions his reasoning and even that of his idol composer John Cage.

The book is also experimental as it attempts to recreate, visually and through text, what happened onstage. Of course, an impossible task, engrossing in its attempt. Story/Time is a beautifully designed book, with the layout of the libretto, framed composition charts, and a stunning set of performance photographs. 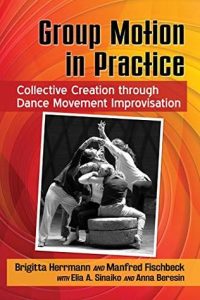 Group Motion in Practice is a foundational text and discourse on applied dance theory, the ephemeral alchemy of dance energy fields, and the art of creating meaningful art.

Aside from theory, it is a compendium of the philosophies, poetry, and remembrances of the company’s history by beloved visionaries Brigitta Herrmann and Manfred Fischbeck, along with their private theories and musing from 50 years of performance history.

Their lives before the formation of Grupe Motion in the 60s in Berlin in the first performances in the US at the legendary Judson Church performance collective and their groundbreaking performances at Jacob’s Pillow with ‘Countdown to Orpheus.’ Fischbeck, Herrmann, and Hellmut Gottschild established the multimedia dance theater troupe Group Motion in Philadelphia in 1968.

This book is also a motivator and practical guide for any dancer with meditations on such matters as ‘The Universal Creative Principle’,’Dance as a Vehicle for Understanding Human Nature,’ and ‘The Awakening of the Body in the Technological Age.’

In chapters covering the company’s concepts, methods, and practices, it is a social history of dance as essential in everyday life as a vital human connection through their Group Motion Workshops in Philadelphia and internationally.

Laced through the book are meditations and poetry, remembrances of significant performances in the US and worldwide. Manfred’s philosophical poetry is interspersed throughout the text, so moving now after his tragic death in April 2021. 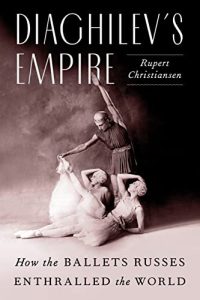 Christiansen condenses dramatic history and backstage farce into this dance bio-history for those who can’t get enough of dance history. He offers a portrait galaxy of dancers Anna Pavlova, Vaslav Nijinsky, Tamara Karsavina, Leonide Massine, Serge Lifar, and other luminaries, including Stravinsky and Balanchine, all escaping the Imperial Ballet of Tsar Nicholas and emergent revolution.

He tracks Serge Diaghilev’s start in dance as the country cousin of one of the academic bohemians in Moscow and men with government or financial influence. Diaghilev’s first extravagant production in Paris was of little interest in Russian classicism and soon embraced the pioneering concept of Isadora Duncan and Ruth St. Dennis, buzz about Pavlova, Nijinsky, and the vampy performance of Salome by Ida Rubinstein.

Christensen chronicles the impresario’s bullish, nail-biting beginnings, with his company always on the brink of folding and being rescued by wealthy balletomanes. It offers all the drama of his constant battles with composers and designers, including his banishment of the static classicism of choreographer Mikhail Fokine and his notorious affair with Vaslav Nijinsky.

He vividly describes the groundbreaking performances in Paris and London of Le Sacre du Printemps. But just as fascinating portraits of Nijinsky in the studio with the dancers for a year of torturous rehearsals, Diaghilev hired Polish dancer Marie Rambert to translate for Vaslav. Meanwhile, Nijinsky was pulling away sexually from the impresario and asserting his star power, even as his mental health deteriorated.

Nijinsky’s quickly arranged marriage to Romola while the company was on tour in Argentina enraged Diaghilev, who summarily fired him. Nijinsky naively thought he could return to the company and smooth it over. Serge didn’t have it, and Vaslav was forced to go on the variety theater circuit in London to try to start his troupe. Bronislava Nijinska, his dancer sister, rescued him in attempting to organize a company, but the project collapsed.

Meanwhile, Serge had moved on to his new protege Leonide Massine, a 17-year-old corps de ballet dancer in the Bolshoi, bringing him to Paris as the company’s new male star and a new lover.

Massine replaced Nijinsky as a lead in the now-back in Fokine’s classic. The choreographer was also seduced back to the company. But Fokine was trapped in Russia by the Bolsheviks, so Massine became Serge’s resident choreographer and produced more relevant work as Europe emerged from wartime.

As Europe became more unstable for Diaghilev, he booked an American tour, but the backer would only finance it if Nijinsky would be dancing. So, Serge agreed. But Nijinsky was now two years older, out of shape and psychologically fragile, but returned to the dance stage.

As the dancers turned, so did the rumors. Christensen does not hold back at how loathsome Diaghilev was wielding his power professionally and personally. He was lecherous to young male dancers, and Nijinsky considered his Russian’ serf’ after he recruited him out of the Bolshoi. As exploitive as he was with ballerinas to attract audiences, Diaghilev was a grotesque misogynist, not holding back his distaste for the female body.

Christensen admirably fills in a lot of previously ignored or erased history of gay and lesbian artists who populated the dance world in the early 20th century and the entrenched homophobia that framed it. Even after a disastrous American tour left them on the ropes financially, Diaghilev was out of ideas but rescued by new investors.

Massine’s ballets were massive hits in London, even if they were performed in a theater that Serge despised. After seasons of hit and miss artistic purpose, financial ruin, and constant infighting. Heiresses and society rescued Diaghilev’s Empire swell in the gambling resort of Monte Carlo. The last of the company’s glory days, noted for ballets by George Balanchine, who was cutting through all the mayhem to produce such seminal works as Apollo and Prodigal Son.

Diaghilev was diabetic and died at age 57 in 1928. Lifar and Kochno were fist-fighting over his dead body for control over the company moments after his death. The end chapter on how the Ballets Russes struggled to maintain its reputation is an expose on the drive of artists to keep going no matter what in the world, dancing to the sounds of war.

Philadelphia Dance Day is BACK! This nonprofit community event has brought hundreds of people out to dance in past years, and 2022 marks their 13th