by Helanius J. Wilkins | reposted with permission for The Dance Journal

Ahhhhhh… Mr. Ailey. Sitting on an angle – not quite in profile, introduces himself by saying “Hi. I’m Alvin Ailey, and I am a choreographer.” This is the scene of one of my earliest childhood memories. My eyes glued to the television screen; I was watching a PBS Special on the Alvin Ailey American Dance Theatre. This PBS Special became a defining moment for me. I was introduced to Mr. Ailey and his company, saw his signature work Revelations for the first time, and gained an understanding of how to articulate what I internally felt. It was a calling to be an artist, to be a choreographer.

This memory is one I currently share quite a bit as part of Artist Talks where I establish connections between my personal journey to dance, drive to do social justice-based art, and what lies at the heart of my most ambitious project-to-date The Conversation Series: Stitching the Geopolitical Quilt to Re-Body Belonging. This is also a memory that invokes in me the notion that I stand on the shoulders of specific giants. One of these giants is Mr. Ailey whose work as a Black American male choreographer has inspired and paved pathways for me and many other choreographers, particularly Black male choreographers.

Return visits of this childhood memory initially began in February 2019 while attending Rennie Harris’ Lazarus, a work that premiered in 2019 to commemorate the 60th anniversary of the Alvin Ailey American Dance Theatre. Ever since witnessing and experiencing Lazarus as part of the Company’s annual season at the John F. Kennedy Center for the Performing Arts Center in D.C., I have been holding the work as the Revelations for our generation. Little did I know I would be reminded of this feeling three years later in February 2021 when I watched the Sundance Film Festival’s screening of Ailey. This beautiful and deeply touching documentary directed by Jamila Wignot looks at the life and work of Mr. Ailey through his own words and through the commission of a new choreographic work – Harris’ Lazarus. The film left me at a loss for words.

Wignot’s Ailey, produced by Lauren DeFilippo and edited by Annukka Lilja, unfolds as an exquisite, poetic and stirring portrait that brings to light histories known and unknown. It amplifies years of whispered challenges within the dance field about who and what work does and doesn’t get embraced in mainstream America. Simultaneously, it exposes the loneliness of being a creative alongside representations, as well as the sheer determination necessary to make a way/make room through DANCE when society appears not to hold any for someone different/BIPOC/QTBIPOC (two things that resonates with me). Deeply affected, I felt present with all the ways the work reflected back to me my journey as a Black choreographer.

Harris’ Lazarus unfolds in much the same way that the film does, exquisite, poetic, and stirring. The first-ever evening-length work commissioned by the Alvin Ailey American Dance Theatre brings life to Mr. Ailey’s history. Its effervescent visuals, choreographic landscapes, and movement intricacies honor him in a way that only dance can and in a way that only Rennie Harris’ care and Black male experience can evoke. Words cannot replace what is meant to be held by and spoken through the voice that is the choreography for this work. I have seen Revelations so many times I have loss count. I hope that Lazarus will be experienced in a similar way, seen and felt countless times by many witnesses for a long time to come.

I hold with tremendous gratitude how my introduction to Mr. Alvin Ailey and his company gave me access to understanding a freedom and expression that has become my life’s work, one where my imagination is front and center. The legacies and work of Black male choreographers such as Rennie Harris are plentiful. They have gifted me a vision of my present pathway and an opportunity to contribute to the building of pathways for future generations of Black male choreographers. Representation and positive influences in one’s life can make all the difference. I know for sure that it did in mine, and it continues to. It is from these shoulders of these giants I stand on that I find a correlation between my successes and my ability to see further into the distance of my imagination.

Circling back to my initial childhood memory of seeing the Alvin Ailey American Dance Theatre PBS Special, I had not taken a single dance class. I am not sure I even knew there was such a thing. But I understood movement. I felt it. I knew it. It was my dominant way of communicating because I was afraid to speak. And with music always in my household and those of my relatives, dancing naturally filled my surroundings. In spite of this, many years would go by before I publicly revealed choreography/dance was leading me through life. It would come far after trying on the ideas of being a doctor or a lawyer – professions identified to me as avenues to “make it” in a world that was stacked against me. The confluence of my childhood memory, Rennie Harris’ Lazarus, and Jamila Wignot’s Ailey coming together in this moment feels particularly powerful. Being a choreographer navigating a world that has been stacked against me, and actioning the change that I want to see, feels even more powerful. 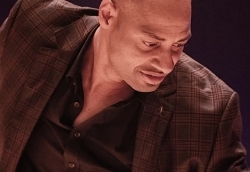 His honors include the 2008 Pola Nirenska Award for Contemporary Achievement in Dance, and the 2002 and 2006 Kennedy Center Local Dance Commissioning Project Award. He was a three times finalist for the D.C. Mayor’s Arts Awards and Bates Dance Festival named him their 2002 Emerging Choreographer. In addition to performing the works of nationally recognized choreographers including Robert Moses, Joy Kellman, and Kevin Wynn, he performed with Maida Withers’ Dance Construction Company (DC) and as a guest with the Liz Lerman Dance Exchange (MD).He has equally enjoyed, and continues to enjoy, creating, presenting, and receiving commissions for choreography throughout the United States and abroad.

To date, he has choreographed and directed over 60 works, which includes two critically-acclaimed musical productions for Washington, DC’s Studio Theater – “Passing Strange” (2010) and “POP!” (2011). Foundations and organizations including New England Foundation for the Arts (National Dance Project), National Performance Network (NPN), the Boulder Office of Arts & Culture Public Arts Program, D.C. Commission on the Arts and Humanities, and the National Endowment for the Arts have supported his work.

He is a member of the National Board of Directors of the American College Dance Association for the Northwest region and was appointed in 2018 by Governor Jared Polis to the Colorado Council on Creative Industries. He is based in Boulder, CO where he is Associate Chair and a Professor of Dance at the University of Colorado Boulder.