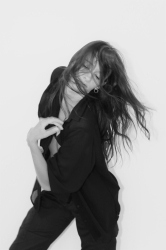 by Nicole Bradbury for The Dance Journal

Preceding the spring of 2020, the question, “What are you going to do after school?” is something I heard often going into my last semester as a dance major at the University of the Arts. Even though a few opportunities lay ahead of me after graduation in May, I often would reply with, “I’m not entirely sure. I want to see what unfolds.”

On March 6th of 2020, as I left rehearsal for Mark Haim’s Goldberg Variations, (a work which eight fourth-year students and two third-year students were eagerly anticipating performing) I had no inclination that it would be the last time I would dance as an undergraduate student in the physical spaces of UArts. The following “unfolding” that took place resulted in an extension of spring break due to the outbreak of COVID-19, which further unfurled into the rest of the semester taking place virtually.

As someone who deeply loves the community, I am a part of at the UArts School of Dance, the fact that I would not have a physical means of having closure to my undergraduate years was jarring. While this transition is necessary, Senior works in the Y-Gym Dance Theatre in April and final performances on the Merriam Theatre Stage in May are all farewells and rights of passage my classmates and I will not get to experience in a physical space together this semester. With company and project auditions being canceled and stay at home orders projected until the summer, many of my peers have had to drastically change their post-grad plans. A virtual commencement is scheduled for May 16th, 2020.

Yet, as I have transitioned my final days as an undergraduate student to what the UArts School of Dance has named Homeschool, a virtual space in which we can practice being “together” while not sharing physical space, I am continuously in awe of the care and support my peers and professors have for each other. The ways in which we move together have been reimagined, and exist in a space that is no longer dependent on fixed time and space. “Together” can reside outside of this.

As strange as it is that my daily rituals now consist of setting up a laptop for Google Hangout classes or check-ins, the ways in which I approach how I practice have shifted drastically. I think in some cases, for the better.

In one of the first few days of Homeschool, Paul Matteson led students in a “glacial moving” practice. This consisted of standing up and laying back down over the course of 45 minutes at the slowest pace possible. As I moved alone in my small bedroom, I found a small sense of relief. There was no one here. I could take my time as needed, and the pressure of following a group was absent. After the 45 minutes was up, Paul said, “I felt like I was having the performance of a lifetime, but no one was here to see it.” I realized I was feeling a similar sensation. The practice and epic performativity of it were physically just for me. Yet, the action of us moving together in the same manner at the same time, was still us moving together.

Of course, not every day is easy. Finding the inspiration to move when being constantly reminded of the climbing infection statistics has proved difficult on multiple occasions. Yet, each time I do I am reminded of why I wanted to pursue this degree in the first place.

“This is all we have,” professor Jesse Zaritt repeatedly stated as he virtually led students through an improvisational score on the second week of Homeschool. He guided us to physically make contact with objects in our rooms, and yield our body weight into them. This action reminded me of where I was, and furthermore where the world is now. We then closed our eyes as Jesse guided us to imagine a space other than ours, one in which we desired to be in. As I began to move, I was reminded of the relationship between dance and imagination. Yes, I was in my bedroom, but through the act of dancing, I was able to also be somewhere else. Imagination and reality collapsed into each other in one moment.

And many of my classmates are fantasizing about similar scenarios. Bedrooms and kitchens become studios, backyards become proscenium theatres. Catching each other in various video chat spaces becomes the equivalent of the moment of seeing each other in passing on Broad Street on the way to class.

In light of everything that is happening, I think that is what I am holding onto. Dance has the capacity to help us renegotiate the ways in which we live. While I never could have expected I would be completing my degree from my bedroom, or viewing my commencement on a computer screen, this experience has continuously reminded me of my own ability to reorient my creative potential. If I am going to take anything away from this moment in time, this renegotiation is something I would like to implement in my artistic practice at all times. Two years ago, professor Emily Wexler told the class of 2020 during a Dance History class, “You will always find a way to dance.” I know now that we will.

The UArts School of Dance will conduct a “share out” on the week of May 5th for virtual reimaginings of works being created and studied this semester.

Nicole Bradbury
Journalist & Contributor at The Dance Journal
Nicole Bradbury is a performer and writer based in Philadelphia. She attends the University of the Arts, where she will receive a BFA in Dance in May, 2020. At UArts, she has performed works by Doug Varone, Bobbi Jene Smith, Andrea Miller, and Jesse Zaritt, among others. Her studies have led her to Israel, where she has studied with the Batsheva Dance Company and Yazmeen Godder. Nicole has also attended the dance festival Camping at the Centre National de la danse in Paris, France. There, she performed the works of Jocelyn Cottencin and Lauren Bakst. Nicole recently presented her own work in Philadelphia, And then, we'll keep going with her partner and collaborator, Neva Guido. She hopes to continue making work and obtain a master's degree in the near future.