The Philadelphia Museum of Art launched its Friday Remix series on October 11, with an ambitious performance showcase by artists, poets, dancers, musicians and multi-media visual and performing arts happening simultaneously all over the museum.  The four-hour event was also a chance to stroll through to the stunning arched ceiling Vaulted Walkway and skylight area on the ground floor of the museum’s restored North Entrance that faces Kelly Drive, which has been closed for 40 years.

All of the galleries were open to view, where you could happen upon feet painting sessions in a passageway or poetry performances on the grand staircase or enjoying with ‘Impromptunes’ with vocalist Eppchez!  riding the museum’s elevators.

No surprise that dance is to be a regular feature of the Friday Remix, and it starting with Almanac Dance Circus Theater catapulting off the columns and scaling the marble walls of the Vaulted Walkway and the evening ending with DJ Matthew Law’s funk and hip-hop dance party at the bottom of the museum’s grand staircase.

In the third-floor west-wing galleries choreographer Megan Bridge’s fidget unveiled a new dance piece “Enclosure…wellspring…retreat’ in the dramatic stone 12th century Fountain from the Monastery of Saint-Michel-de-Cuxa in the Roussillon region of France.

Choreographed by Bridge with music/soundscape by Peter Price, it was the time-centerpiece of Cloister galleries of early iconographic Christian sculpture, painting and crafted religious artifacts.  The stone fountain was used by the monks for among other things, shaving and washing clothes. Its sculptured architecture characterized by cutaway arches, ledges, and geometric forms, characterized later by art historians as Romanesque.

For Megan Bridge, the opportunity to create dance in this gallery was “Rich and inspiring. Because there is so much history…. there is such a contemplative nature of the space, we wanted to do something a little bit formal and reserved. But also had some sweeping elements.” “Enclosure…wellspring…retreat’ proved a perfect guide to understanding the work. The two performances started in the gallery’s threshold where spectators lining the periphery of the hall.

Bridge and dancers, Cierra Woods, Sydney Donovan, Kat Sullivan, and Kathryn Desimine, clustered together the groups and retreated into the hall, and posed as a group statue. Then the grouping slowly sank to the ground at the feet of medieval wood sculpture of Jesus on the Cross.  Bridge stood as the others left and led the audience to the gallery’s high ceiling gothic anteroom with the dancers’ approaching and pointing out the masonry and artwork by shining flashlights on the eaves. Then everyone proceeded to the main dance arena of the Monastery Fountain, encasing an entire room.

Composer Peter Price is co-director of fidget and Bridge’s husband, had only the performance day to mix the entrancing soundscape. At times, the dancers are reflexive of the soundscape in breakout improvisational solos as they circle around- in and through- the fountain’s intricate architecture. The center of Price’s soundscape is softly resonant with German church bells which he had recorded previously in Germany, with overlays of a child’s vocalizing, percussive electronica and natural sounds fading in and out in quiet soundwaves.

At certain points Bridge leads the dancers in entwined processionals, conveying a universal communion, whether it was ecumenical or secular, it didn’t matter. Perhaps meant to be symbolic of communal rituals and the necessity, of solo expression.

It was easy to imagine that these were sacred temple dancers, but just as easy to not make that assumption just because they were dancing in an ancient temple. At one point Cierra Wood soloed in a modernist quick tempo solo punctuated with crouched tai chi like moves. Later, Bridge moves a distance from the other dancers in sinuous motion, with a stoic gaze or maybe a silent benediction.

There is a sense that this earthy dance and sound needed to live in this space.  The dancers conveying such quiet power within the expressive freedom of Bridge’s solid choreographic structures.  The bells summoning the unison of the dancers, their arms linked geometrically over their heads as they move in simple ensemble patterns around the fountain’s tiers and enclaves, casting a living fine art frieze against the pink marble and ancient stone of the cloisters. 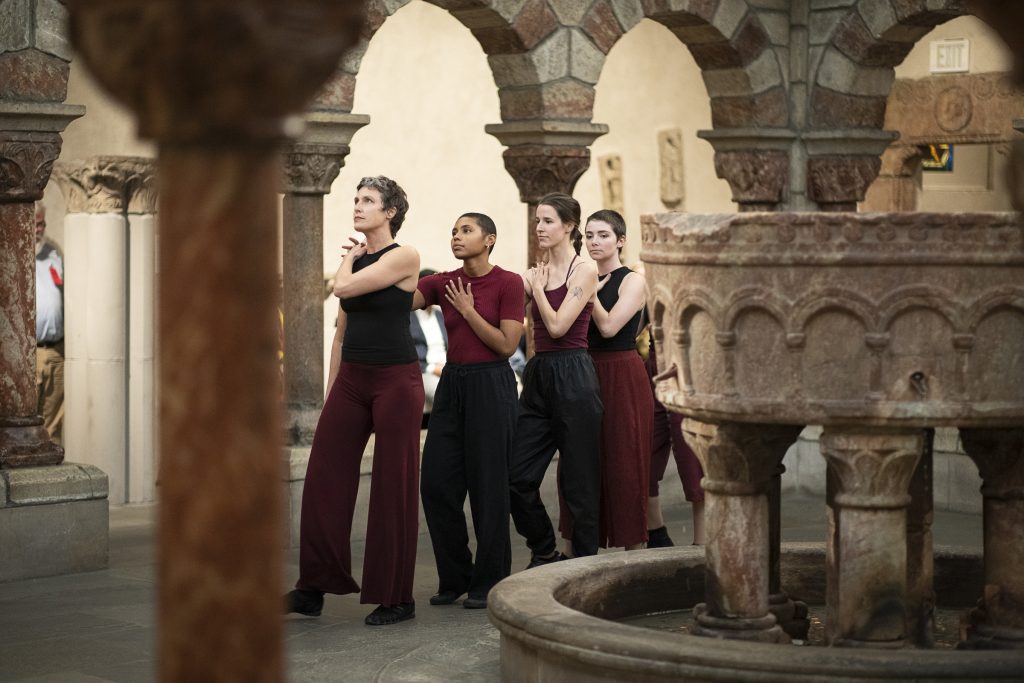 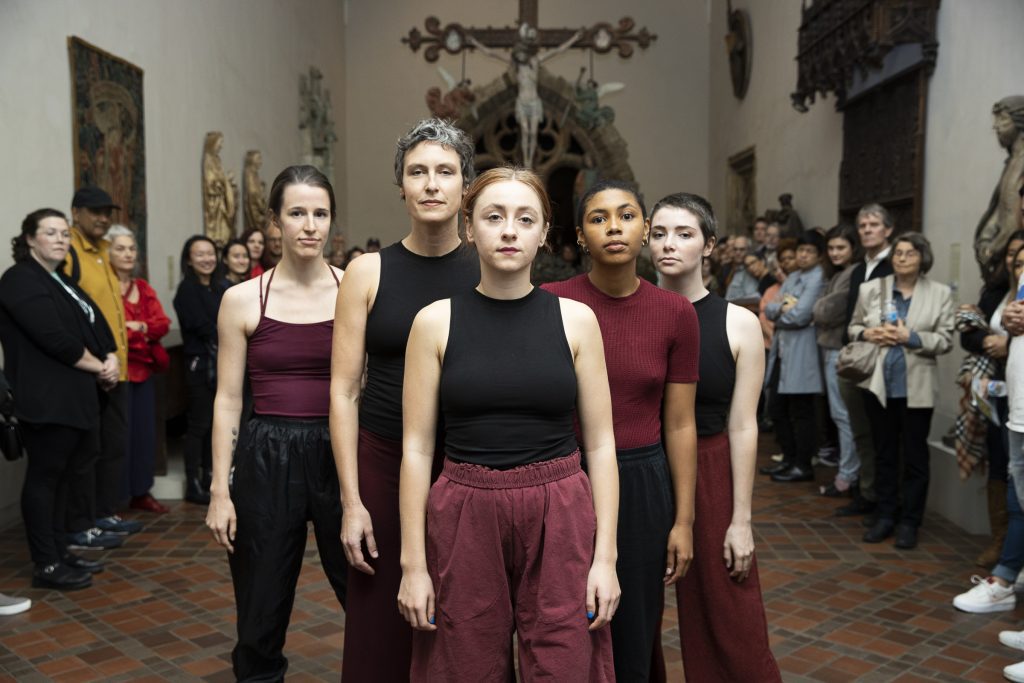