On Friday, October 11th the Philadelphia Museum of Art debuted their new “Friday Remix” series, a quarterly event that seeks to bring an eclectic and exciting array of live art to the museum. As attendees wander the museum they are treated to improvised melodies in the elevator, participatory art projects, several musical performances, and a gallery tour by poet Kai Davis where art and poetry collide. In the newly reopened Vaulted Walkway, attendees could find Almanac Dance Circus Theatre performing at three separate times throughout the evening, bringing gravity-defying feats of acrobatics to the imposing architecture of the space.

The line between the audience and the performers is practically non-existent in this site-specific work, as observers were free to move about the walkway freely while the company performed in their midst. This was emphasized at the piece’s start as the company entered with little pomp and circumstance, silently forming a huddle and beginning to move like a human mass. The work is largely concerned with shape and the shapes that can be formed through the human body in order to complement those found in the architecture of the walkway. As such, it’s fitting that the point of initiation is rather shapeless. The pile of bodies formed by the dancers begins to move its way down the walkway, dancers rolling and tumbling over each other as they move inch by inch through the crowd. Slowly, the performers begin to fall out of the rolling mass, left behind one by one until they span the entire length of the space. This is where the movement of the work begins in earnest, with sharp panicked gestures bringing an intense ad dynamic energy that reverberated off the stone walls and through the entirety of the crowd.

Following this, the performers begin to form complex shapes via partnering which mimics the high vaulted arches of the walkway itself. Excitedly, they usher audience members beneath these human archways, which they constructed one after the other in succession down the length of the space. The act of blending the architecture of the space and that of the performers’ bodies lends cohesion to the work which serves to further envelop the audience in the Vaulted Walkway, emphasizing the scope and scale of the space itself via movement. During these moments where physical feats of wonder are being performed it often feels as if the space itself is holding its breath, this sense of anticipation, fear, and wonder is heightened by the fact that the audience themselves are thrust into the mix, often mere inches from the performers as they execute the choreography.

Eventually, the movement escalates again as performers stand on each others’ shoulders and move about the space, bouncing from wall to wall like a giant game of human pinball. It’s moments like these where performance and play blend together and where despite the seriousness of the architecture it’s clear that there’s an undercurrent of fun for both the performers and the audience. The three duos come to rest alongside one of the walls at various points throughout the walkway and transition into a partnering segment which utilizes the wall to create a series of extraordinary shapes and poses. This serves as a sort of inversion of the earlier partnering segment, as here the architecture serves as a performer rather than the other way around. The wall itself acts as a third partner in a trio, giving support where needed in order to accomplish the stunning poses presented. There is a theme of crumbling and rebuilding here as the performers build to a shape which subsequently crumbles back to the ground, only for a new one to be built in its place. Near the piece’s climax, three dancers work together to form a human tower that reaches nearly to the top of the 24-foot high ceiling, fully emphasizing the scale and scope of the space in which they’re performing. Its moments like these where the interplay between the two aspects of the performance really elevate each other, working to heighten the work as a cohesive whole.

Melding the beauty of the space’s architecture with choreography that not only serves to elevate it but that also pulls the audience into the space and forces them to consider their surroundings makes Almanac’s offering for Friday Remix a truly exciting and unforgettable part of the evening and a fantastic addition to the program as a whole. It also highlights the diverse array of programming at the event as one minute you can be experiencing live circus, the next you can be involved in an immersive music experience, and shortly after, you may find yourself listening to live poetry, all while being ushered through the museum’s galleries. In honoring the space and working to draw out all the potential for creative use, Almanac creates a fantastic and thorough exploration of architecture, anatomy, and the interplay between the two. 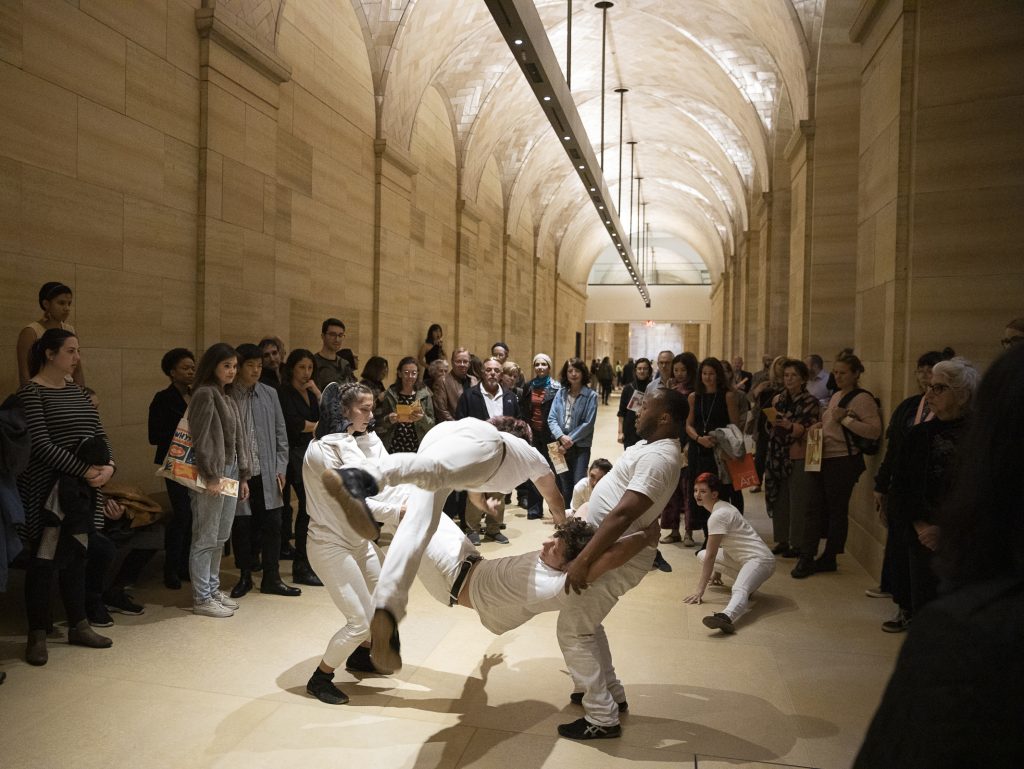 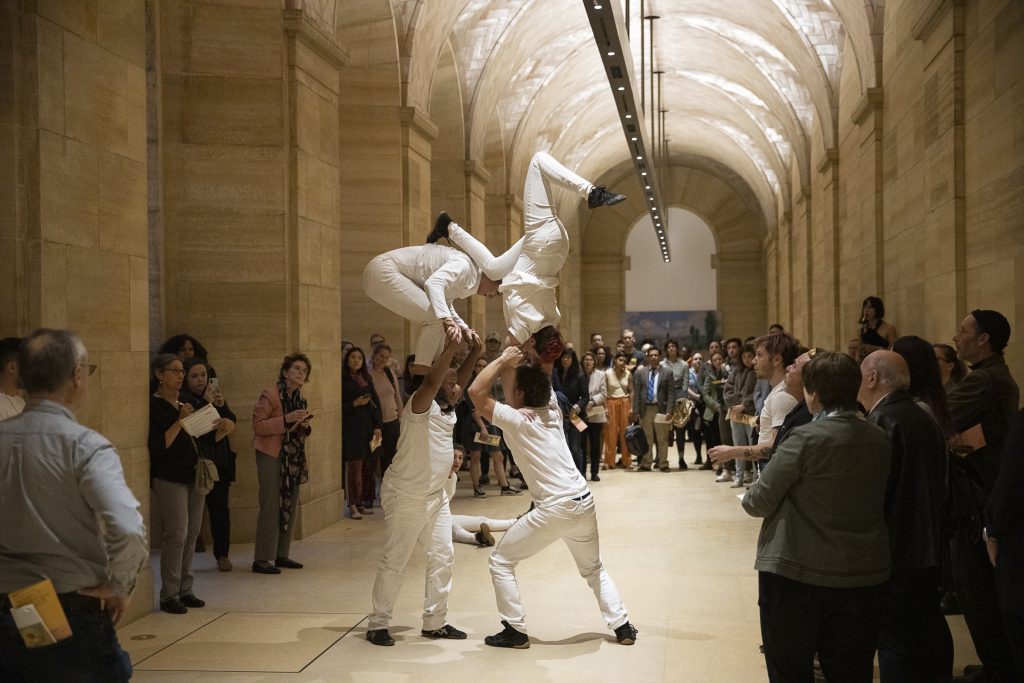 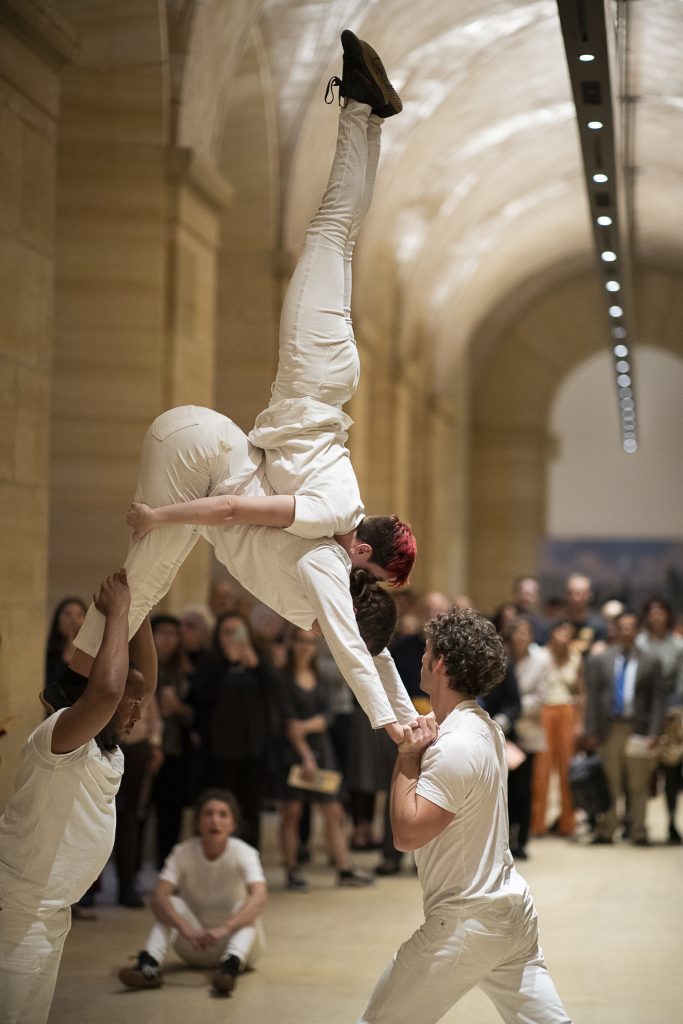 Winfield Maben
Winfield Maben is a Philadelphia based writer and dancer and an aspiring member of the greater Philadelphia area dance community. He graduated from Muhlenberg College in 2018 with a BA in Dance & English and has previously conducted several features for the Lehigh Valley Dance Exchange. He has worked with several established choreographers including Tiffany Mills, Sharon Vazanna, and Trinette Singleton and has performed in a variety of unique locations including Triskelion Arts (Brooklyn, NY), ArtisTree (Pomfret, VT), and the Brooklyn Bridge. Winfield aims to explore the art of dance through the multidisciplinary approach that was emphasized in his education, not only examining the physicality of a given work but also the intentionality and cultural impact of the work as a whole.