FringeArts announced the curated component of the 2019 Fringe Festival, featuring eleven theater, dance, music, and interdisciplinary engagements at FringeArts’ home on the Delaware Waterfront and in venues around the city September 5-22.

“While assembling the 2019 festival program, we were interested in supporting projects that promote civic exchange through scaled modes of engagement for audiences,“ said Katy Dammers, Artistic Producer.

The full Fringe Festival lineup, including the independently produced shows, will be announced in August. Tickets to FringeArts Curated programming are available at FringeArts.com or via phone at 215-413-1318. 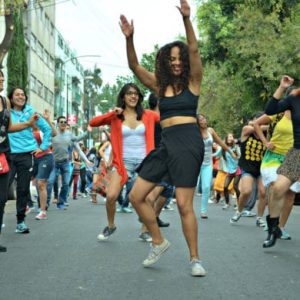 Winding through a South Philly neighborhood from 5th Street between Shunk and Oregon to Mifflin Square, Úumbal: Nomadic Choreography for Inhabitants is an ambulatory dance performance wholly created by the people of this city and enacted by 100 Philadelphia residents representing its diverse population.

Choreographer Mariana Arteaga developed Úumbal (Mayan for “balance”) in response to an incident in 2014, when 43 students disappeared from Ayotzinapa, Mexico, presumed murdered by criminal gangs or the authorities that enabled them. She watched as the Mexican government repressed the mass protests in the wake of the disappearance. If repression could be choreographed, she mused, so could joy. She saw in her practice of collective dance the opportunity to reclaim public space for pedestrians, for communities, for joy. “I was obsessed with the idea of making a collective body visible,” she said. “Recovering the streets with the social power of dance, demanding the right of joy, the right to be happy together.”

First performed in Mexico City, Úumbal makes its US Premiere as part of the 2019 Fringe Festival. Arteaga and her local collaborators set up collection points in various neighborhoods to solicit dance steps from everyday Philadelphians. A group of local volunteers helped mold these contributions into a 100-person performance that includes movement, choreography, and choreographic actions in public spaces along the streets, parks, and sidewalks of South Philadelphia.

FringeArts is hosting open auditions for Úumbal on June 13, 18, and 25 in Mifflin Square Park. Visit http://uumbal.fringearts.com to learn more and sign up to audition.

Mariana Arteaga studied Social Communication at the Metropolitan Autonomous University Xochimilco in Mexico. She has worked internationally creating, directing and producing artistic projects, festivals, curatorships, and choreographies. She has also worked as a performer for various national and international choreographers. She has been invited as a curator and speaker at the Performing Arts Meeting in Yokohama, Japan, the Festival Cena Contemporânea in Brasilia to the Encounters of Cena, and the Tanzplattform in Germany.

Major support for Úumbal: Nomadic Choreography for Inhabitants has been provided by the William Penn Foundation.

“Put Fase, please, on the list of post-modern greats. This is thrilling work: rigorous and pure, the dancing burns like dry ice…. Fase and the women who dance it create a stunning image of daring within order and turbulence within calm.”—Village Voice

Fase, Four Movements to the Music of Steve Reich, choreographer Anne Teresa De Keersmaeker’s very first performance, premiered in 1982. Fase comprises three duets and one solo, choreographed to four repetitive compositions by the American minimalist Steve Reich. De Keersmaeker uses the structure of Reich’s music to develop an independent movement idiom that doesn’t merely illustrate the music but also adds a new dimension to it. Both the music and the dance start from the principle of phase shifting through tiny variations: movements that are initially perfectly synchronous gradually start slipping and sliding, resulting in an ingenious play of continuously changing forms and patterns.

Having always danced Fase herself, Anne Teresa De Keersmaeker, for the first time in the work’s history, now passes it on to two new dancers.

In 1980, after studying dance at Mudra School in Brussels and Tisch School of the Arts in New York, Anne Teresa De Keersmaeker (b. 1960) created Asch, her first choreographic work. Two years later came the premiere of Fase, Four Movements to the Music of Steve Reich. De Keersmaeker established the dance company Rosas in Brussels in 1983, while creating the work Rosas danst Rosas. Since these breakthrough pieces, her choreography has been grounded in a rigorous and prolific exploration of the relationship between dance and music.

She has created with Rosas a wide-ranging body of work engaging the musical structures and scores of several periods, from early music to contemporary and popular idioms. Her choreographic practice also draws formal principles from geometry, numerical patterns, the natural world, and social structures to offer a unique perspective on the body’s articulation in space and time. In 1995 De Keersmaeker established the school P.A.R.T.S. (Performing Arts Research and Training Studios) in Brussels in association with De Munt/La Monnaie.

Rosas is supported by the Flemish Community and by the BNP Paribas Foundation. 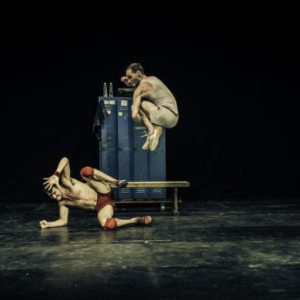 Luciano Rosso and Alfonso Barón stand side-by-side inside a locker room. The tension between them is palpable. This is theater, but there’s very little dialog, just the sound of their bodies and the found noises of a portable radio. Instead, we are drawn into their primal language, a physical communication which intensifies throughout the show.

Mining multiple expressive forms—dance, athletic competition, clowning, martial arts, acrobatics, body percussion, mime, cockfighting, and more—Un Poyo Rojo probes the boundaries of bodily and spiritual interaction between individuals. It’s a provocation, an invitation for us to laugh at ourselves and, at the same time, to accept ourselves entirely.

Un Poyo Rojo was founded in Argentina in 2008, and has been performed to sold-out audiences throughout the country. The show set out to conquer Latin America and Europe in 2015 as it began its first world tour. The play is performed by Alfonso Barón and Luciano Rosso, two multi-talented dancers, actors and choreographers. Trained in five types of dances, Luciano Rosso is a true star in his native country. His YouTube channel, filled with lip synch videos, has millions of views. Alfonso Baron is a former elite sportsman turned performer. He collaborated with several of the most recognized choreographers and dance companies in Argentina. The duo is directed by Hermes Gaido, a top stage director and graduate of the Buenos Aires Art Academy. 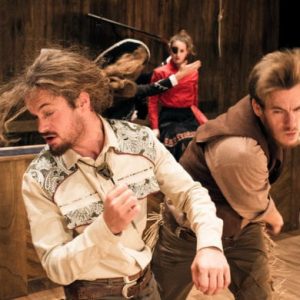 Part barn dance, part movie pitch, part comedy of manners, Pursuit of Happiness plays with language, movement, setting, and genre through an endlessly morphing folk tale of ultra-violent Western expansion, taking on the myth and legacy of the American Dream and its aspirational aftermath.

Nature Theater of Oklahoma is an OBIE-winning New York art and performance enterprise under the direction of Pavol Liska and Kelly Copper. With each new project, we attempt to set an impossible challenge for ourselves, the audience, and our collaborators—working from inside the codes and confines of established genres and exploding them. No two projects are formally the same, but the work is always full of humor, earnestness, rigor, and the audience plays an essential role—whether as spectators or—just as often—as participants in the work. Using readymade material, found space, gifted properties, cosmic accident, extreme formal manipulation and plain hard work—Nature Theater of Oklahoma makes art to affect a shift in the perception of everyday reality that extends beyond the site of performance and into the world in which we live.

EN-KNAP Group, led by its founder, the internationally renowned choreographer and dancer Iztok Kovač, is the only permanent contemporary dance company in Slovenia. Since 2009, this ensemble of remarkable dancers has been based at the Španski Borci Cultural Centre in the Ljubljana-Moste neighborhood. Since its establishment ten years ago, EN-KNAP Group has worked with over 30 Slovene and international choreographers and theater directors of aesthetically diverse backgrounds, and created a repertoire of 26 full-evening stage works and a dance film. In addition to making over 50 domestic appearances per year, the company regularly tours internationally.