In Studio With Choreographer Vince Johnson

In the maze of dance studios on the second floor of Urban Movement Arts is a where choreographer Vince Johnson and dancers Maddie Hopfield and Kayla Bobalek have been rehearsing Zig Zag Blossom which will have its premiere June 2 at the Performance Garage.

Before Johnson and the dancers begin the rehearsal for his work, he asks the dancers if they’d prefer to walk through the section or dance it through because there are more phrases “to insert,” he says, adding “and Maddie I think it is best to go from your notes. I’m sure they are more thorough than mine, but as we go through if think something is missing, I’ll chime in.”

After Hopfield and Bobalek experiment with a few interlocking steps and crouched leg extensions,  Johnson comments, “That was a lovely transition… and the energy between those two points was really interesting.”

The dramaturg in Zig Zag Blossom is bandied about as they dissect each move, repeating each step over and over to smooth out the quick transitional steps.  The evaluation of every move doesn’t eclipse the fun the trio seems to be having over the two-hour session. Both dancers want to know what’s behind the moves, even though they admit later that it is a lot to absorb. It is obvious that it is just as much about the joy of creating, the energy and the movement dialogue between choreographer and dancers.

The segment is structured around instinctual childish behavior and goofy games, it challenges perceptions of proof-typical gender roles, but also it is all about spontaneous physicality and feral childhood fun. The temperature in the room is heating up and Johnson brings in a hurricane fan, as they proceed. The air gets thick, but among the three dancers, a lot of joy around bringing in the specificity that will animate these characters.

Johnson comments that the themes he is exploring are already on a deeper behavioral level.  In part, it expresses “My boyhood imagination and how it is transposed on a more sophisticated stage. Expressing my understanding of things…. which deal with the instinctual childhood perception of the environment, expressed through spontaneous physicality, exploring impulses and aggression, including whiteness and violence, for instance. And I also am seeing (experimenting) on how the dancers relate to that with their own bodies. Exploring this relationship in real time on the stage.”

Zig Zag Blossom will have live musical accompaniment with Veronica Jurkiewicz and Jennifer Boorum, who are violists, but in this work they will perform as vocalists and joined by Matt Engle, playing the upright bass and loop pedals and rhythm electronica. The original score is a collaboration between the musicians with Johnson also contributing compositional prompts.

Also, Johnson has been experimenting with filming as part of the performance itself  “Aiden Un and Ish Payne, what I’ve been doing is experimenting over the last year where I did improv with cameramen being used inside the work. So in Zig Zag Blossom, the cameramen Aiden Un and Ish Payne will be performers as well.” Johnson has used them before, wielding their handheld cameras in hazmat suits, but this time they will be in as yet undisclosed character costumes.

The other elements of Zig Zag Blossom are more structured choreography danced by a supporting cast that includes Johnson and Anne-Marie Gover. A week before the premiere Johnson was hinting that “there may be last minute (dancer) ringers…” added to the cast.  Is the piece dance-theater or improv, or a fusion work?  Johnson said he prefers to think of it as “a happening.”

Johnson is most identified as a hip-hop dancer and choreographer, but works in any number of styles, including dancer-theater narrative works, experimental dance and is himself an accomplished improvisational soloist. A graduate of Villanova, Johnson established the first hip-hop program at the Rock School of Dance and is a master martial arts instructor who has coached world champion competitors. He is a founding director and leading instructor of UMA and MoveMakers – a consortium of 16 dance teachers and professionals instructing in different disciplines and vanguard genres.

Zig Zag Blossom will be the culmination of three days of events by UMA, MoveMakers, and UMA youth dance programs. Meanwhile, during the weeks Johnson needs preparing for the show, nothing slowed down at UMA studios classes and events, with Johnson’s schedule as crowded as ever, and he said he is continually inspired by “the impact UMA has been on the community.”

“The UMA studios here are really a platform for incredible diversity. We started in spring 2015 and it was just a small independent class of five kids.  And now it’s kind of mind-blowing to where we are now.” Instructors in a slate of movement and dance arts from hip-hop, jazz, swing, yoga, and martial arts disciplines and emerging vanguard idioms. The credo on the UMA website states  “UMA is here for marginalized and oppressed populations of all races, genders, sexualities, ages, and body types.”

“UMA and MoveMakers started in 2015 and keeps expanding and this is the first time they will present performances in another venue, The Performance Garage with three days of events.  Lily Kind is assistant director of Urban Movement Arts, teaching Lindy Hop and other swing styles.  Kind also organizes performances and community events and directs the ‘WorkingInOnIt’ June 1 showcase at the Performance Garage that features students, teachers, and guest artists from MoveMakers.

Part of Johnson’s dance philosophy that he teaches at all levels. It is his belief that the dancer needs to understand the moment of liberated expression.  “The technique is the starting point that becomes so automatic and then releases ourselves from the mechanical aspects… the point In operating a school that stems out of African diaspora traditions, there is one thing that I hope that we all activate in our lives, which is the ability to emote in dance, or even better–Let’s call it to rejoice.” 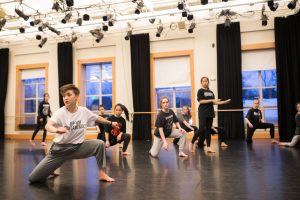 0 replies on “In Studio With Choreographer Vince Johnson”