Arts organizations rarely turn to one another to find ways to achieve their mutual goals, yet many collaborative opportunities exist for building audiences. The possibility of creating synergies among local arts organizations is endless but few do it well. However, this was not the case in the recent collaboration between Brian Sanders’ JUNK, and conductor Yannick Nézet-Séguin, and the Philadelphia Orchestra, which presented Prokofiev’s ballet score to “Romeo and Juliet” at Kimmel Center’s Verizon Hall. A testament to the strength of each of these organizations were the sold out performances over a three day run with an audience makeup that was a hybrid of both dance and music aficionados.

The challenge of setting choreography in Verizon Hall is not to be underplayed here with its open stage (occupied by a full orchestra), 360 surround audience with balcony seating behind the orchestra, and a lack of actual performance space. Perhaps this is why choreographer, Brian Sanders was so well suited for the task with his dance-acrobatic and aerial troupe that is accustomed to such challenges. The scene was set with a platform, placed at the back of the orchestra bathed in light and rising from the stage to the first balcony level. Additional trussing was suspended horizontally above at both second and third balcony levels. The dancers worked from the platform, balcony seating, rails and the suspended trussing throughout the course of the evening. 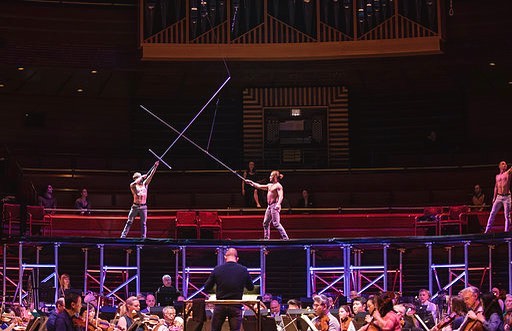 Conductor Yannick’s dynamic interpretation of Prokofiev’s score was equally matched by Sanders’ careful exegesis and choreography of the work. For example, in the opening scene, three male dancers begin their performance on what appears to be suspended swords. Sanders did, in fact, reclaim Prokiev’s original objective, diverging from prior balletic processional interpretations, as Romeo (Teddy Fatscher) and his comrades Benvolio (Jared Cutler) and Mercutio (Darren Dash Robinson), began their energetic aerial joust.

JUNK is not without their comic interjections, in keeping with the Shakespearean style, and as exemplified by a suspended Darren Dash Robinson clad only in a very, very short tulle tutu attempting pointe on a balcony rail above the orchestra.

But the standouts of the evening were Teddy Fatscher and Julia Higdon as our main characters, Romeo and Juliet. While we are presented with Romeo’s interpretation of events as well as Juliet’s, as the evening unfolds, it is clear that we are seeing far more through Juliet’s eyes. In act one, the Love Dance, Juliet in a makeshift swing soars high above with a variety of midair balletic variations, which shows Higdon’s incredible strength and grace. But it was the pas de deux, in the bedroom scene with a series of lifts and more grounded movements that gelled this couple’s foundation in and out of character.

In the Farwell before Departing, Fatscher and Higdon offer an emotionally charged performance on a set of aerial swings that is simply breathtaking as their bodies become adjoined, parallel to each other, only to once more break away.

Higdon is fearless and the level of danger at times in her performance was daunting. In act three, she does a dance wrapped and suspended in red silk that appears to be held by only two fellow dancers over a balcony. In another scene, she shimmies a rope from orchestra level to the suspended trussing two balconies above in an effortless fashion that would put any Marine to shame. And in the prelude to the funeral scene, she descends a similar rope three stories while inverted.

But the performance was not all in midair, with quite a few sections performed by the accompanying dancers on the narrow and elevated platform. In JUNK style, there were acrobatic dives over each other, intense lifts and releases and rapid movements in a variety of fight scenes such as the one between Tybalt and Mercutio, that were as intense as they were dangerous.

In the infamous funeral scene, which can often be overacted to the point of being comedic, Fatscher, Higdon and accompanying dancers seemed caught up in the moment lending authenticity to their performance.  True to the score, Juliet takes her own life and our couple is set to rest.

While JUNK’s movements and aerials could have easily been a distraction to the orchestra’s performance, it was a true collaboration in which both elements equally shined. In noting the conversations of audience members as they exited the hall,  it was clear that they had just witnessed something extraordinary and they were anxious for more!

0 replies on “Sanders and Yannick Soar With Romeo & Juliet”