John Heginbotham, artistic director and choreographer of Dance Heginbotham, has a talent for presenting the quirky. This weekend at the Annenberg Center marked his company’s Philadelphia debut. With two disparate dances, the company showcased a sly wit and some effervescent dancing, yet seemed rudderless and lightweight at times.

In Twin, a now-signature work for the company, eccentricity simmers. With music by British electronica composer Aphex Twin maintaining a steady and lively pace, five dancers, often purposefully expressionless, prance about the stage in a pack, relentlessly following unseen edges. Here Mr. Heginbotham showcases his knack for clarity of phrasing and flawless execution by his dancers, who run backwards in weaving patterns while never looking where they are going, and can turn on a dime in perfect synchronicity as they pass each other.  Twin is mainly abstract but certainly references the title. At one point, lighting designer Nicole Pearce splits the space in half, one side drowned in blue, the other in green. While the stage is divided in color, dancers Lindsey Jones and Courtney Lopes, outfitted in Maile Okamura’s bodysuits covered in repeating geometric patterns, mirror each other’s movements. Still, there were a few instances-Kristin Foote’s first sudden appearance standing, looking straight ahead, stoic and unmoving with no interaction with the other bodies onstage-that had me asking, “Why?” Twin ends with Foote’s second still impassive appearance, as dancer John Eirich, outfitted in an all-white combination of long skirt and a short-sleeved shirt, rolls diagonally across the stage to Foote’s feet. Foote is clad in all-black. Another titular reference perhaps? In all, the plotless Twin showcased disciplined virtuosity and a nod towards the kooky but never seemed to reach past the surface.

Mr. Heginbotham was a member of the Mark Morris Dance Group for the better part of fourteen years, and in Easy Win, his movement vocabulary reflects his pedigree, taking balletic movements to far-off farcical places. The piece begins with a musical introduction by jazz pianist Ethan Iverson (also an alum of Morris) who plucks out complicated rhythms and serves up a brief history of jazz from his seat onstage. The dancers begin by executing a series of plies and stretches, evoking an image of company class. The movement builds, as searing arabesques and lofty leaps are introduced. And then comes the spoof; effortlessly mixed in are Horton-esque jumps in the formation of a capital T, moonwalks, and cha-cha slides. Patterns here are cyclical, repeating and offering up variations, riffs on the main phrases.  There is an air of frivolity and merriment, each dancer for the most part in their own worlds, with encounters manifesting as fleeting moments in time. As the music winds down, so do the dancers, dialing their dancing down to a simple walk before exiting.

Dance Heginbotham revels in oddity and deadpan humor while churning out flawless technique and charming set and costume design. Yet something seemed lacking – a more meaningful depth alluded me. Even still, Dance Heginbotham left an impression, and will only evolve to new heights as this still-fairly-new company continues its ascent into the upper pantheons of the dance world. 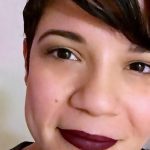 Courtney Colón is a creator, educator, mover, and artist-activist. She holds an MFA in Dance from Hollins University, where she studied in Virginia, New York, and Germany. Ms. Colón completed her BA in Dance from Stockton University, graduating with distinction in her program. Courtney’s senior work, “I Am My Own,” was selected to represent Stockton at the American College Dance Festival in 2015. Courtney has taught and performed extensively throughout the United States. Her choreography and lectures have been presented in NY, NJ, PA, DE, NC, and VA. In 2010, Ms. Colón founded pillardance company, a dance collective based in Philadelphia, PA.

Courtney is most interested in generating disruptions within her work by referencing ideologies surrounding the sociological and political landscapes of contemporary American society, where others can find their own meaning and narratives. Ms. Colón prioritizes a connection to her internal and external environment, to others, and to the broader human experience. She believes that we are all connected to a larger global community and wishes to make this connection more clear and relevant.