Landmarks, A Performance Filled with Gravity and Promise 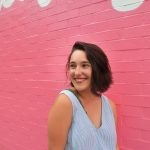 by Emma Elsmo for The Dance Journal

Drexel University’s dance ensemble performed their winter concert, Landmarks, at the Mandell Theater in University City, offering an intriguing collection of both student and professionally choreographed works. While many of the pieces presented had a joyous tone to them, others tackled grave issues, and some simply highlighted the beauty behind strong technique.

The opening dance Find Your Mark, choreographed by students Gina Moffa and Laurel Murr, offered the audience a happy start through an ode to Philadelphia. With video projection of Rittenhouse Square and a piano rendition of “A Sky Full of Stars” by Coldplay, the semi-rudimentary choreography had promise in moments of succinct unison and creative stage spacing.

However, it was The Mind Bender by Dara Steven Meredith that captured my attention as an audience member in a way that shook me to my core. Meredith, winner of the Ellen Forman Memorial Award, set her piece on a number of the Drexel Dance Ensemble members. Inspired by the struggles of a mind plagued by Schizophrenia, this striking work sent shock waves through the theater as the dancers immersed themselves into a world of dark creation. The choreography was genius in its repetition and manipulation, and the vocal motifs made tensions palpable as the paranoid mind unfurled in front of us.

The evening continued with Rhine by student McCarry Papula. This watery influenced work had beautiful costume design by Cybele Moon, and satisfying symmetry throughout the piece- both in spatial patterns and in choreographic structure. MDW A10 by student Joseph Kindt closed out the first half of the show on a smooth, groovy note as the dancers ever-so gracefully executed subtle, stylized contemporary hip-hop-esque choreography.

After a short intermission the show continued with a faculty choreographed piece, Subject to Change. Rebecca Arends created a work with decidedly angular patterning yet gentle movement. Lighting designer J. Dominic Chacon turned the stage into a work of art through delicately warm designs. You are Here by student Hayley Beck, was a confusing yet compelling work in progress with promise due to the choreography itself being fluid and clear.

Stronger in the Masses by guest choreographer Michael Nickerson-Rossi, was a beautiful ode to contemporary ballet. The choreography, while simplistic in nature, was technically driven and balletic in style. The leotards and flowy skirts matched the buns atop the dancers’ heads, and they all looked like ballerinas in a music box. Student Noa Urbaitel’s work On My Own Terms, was emotionally intelligent as well as strongly structured in parallel to the pop-rock tidings of Twenty-One Pilots.

Finally, student work Unearth, Expose, Discover by Bryn MacNichol closed the show with ambient sounds and extremely decisive movement.  The group’s movement sprinkled with solos and duets was a perfect way to close the evening. Landmarks was clearly a show dedicated to land-marking new and emerging dancers and choreographers.

Emma Elsmo
Journalist & Contributor at The Dance Journal
A Chicago native, Emma Elsmo has been dancing since the mere age of two and has been writing for as long as she can remember. She began her formal dance training at the Academy of Movement and Music in Oak Park and has spent three summers training under Hubbard Street Dance Chicago's professional programs, as well as one summer spent with Deeply Rooted Dance Chicago. Currently, she is happy to be a part of several projects being created in the Philadelphia area. A lover of all things art related, Elsmo is currently getting a Bachelor's in Fine Arts from Temple University.

0 replies on “Landmarks, A Performance Filled with Gravity and Promise”