Last month, Pennsylvania Ballet artistic director Angel Corella launched the company’s 55th season with the lavish Kenneth MacMillan production of Romeo & Juliet, which attracted a near sell-out two weeks run at the Academy of Music.  For the company’s fall program at the Merriam Theater, Corella showcases the artistic range of contemporary styles with premiere ballets by choreographers Andrea Miller and Russell Ducker on the program with the marquee ballet Jiří Kylián’s ribald and droll 1991 classic ‘Petite Mort’ scored to Mozart piano concertos.

The last week of October, Miller and Ducker were spending long hours ensconced in company’s studios on Broad Street and between their tight rehearsal cycles, took time to talk to Dance Journal about their upcoming new ballet premieres. 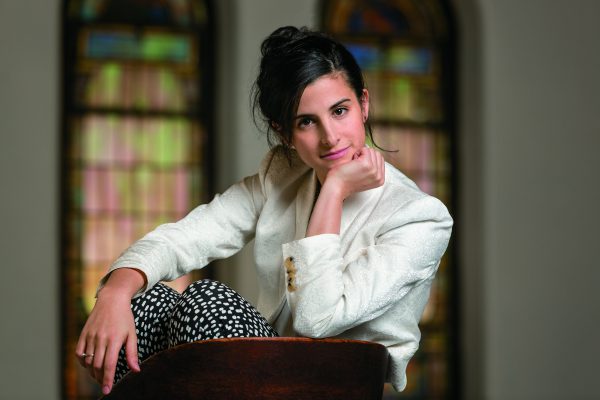 At first glance, Andrea Miller’s choreography may strike one as visceral, daring, severe and perhaps at first a foreign dance language for a ballet company. Those elements are just part of her choreographic template. As Miller will also show in her new ballet, Evenings, her choreography is very lyrical, sensual, earthy and sculptural and very much a dancer collaborative.

“I’m very influenced by the person, to me, the dancer brings a lot of information and direction of where we might go together to try to create a third language,”  Miller said, moments after she finished rehearsal on a central duet with principal dancers Jermel Johnson and Oskana Maslova for Evenings, her first commission piece for Pennsylvania Ballet.

Miller has emerged as one of the most innovative choreographers of her generation. She is the founding artistic director of the Brooklyn-based Gallim Dance Company and she also is a sought-after choreographer for dance for the fashion industry, film, and commercial media. “I love the fashion and film worlds, mostly because I want to push the boundaries of where dance can live and be relevant outside of theaters.”

Miller is the first choreographer to be named Artist in Residence at The Metropolitan Museum of Art. Last year she premiered Stone Skipping at the Met with 9 Gallim company members and guest dancers from the Juilliard School. She concluded her tenure in May with the highly praised piece (C)arbon.  a dance, film, sculpture, and soundscape performance piece about the human body.  It was part of the large exhibit Like Life: Sculpture, Color and the Body in the Breuer Galleries.

Gallim Dancers performed simultaneously in three rooms on “A durational loop,” she explained “I was interested in the anthropological study of the body, the behavior of the body as an individual and how it differs in relationships. As a lover, parent-child, foe or friend.” with some of the same duet choreography in different spaces with different partners- a man and woman, or two women or two men,” with each dancer’s identity making it indelible.  Miller said she wanted to study the behavior of the body as it reveals itself differently in private and with others.”

Evenings is Miller’s first commission with Pennsylvania Ballet and is a ballet of a very personal nature for the choreographer and one perhaps that she never expected to make.

Miller explained, “August 22 was my first day of rehearsal, here at the ballet….it was also the one-year memory of the day my dad was killed by a car.” Andrea said she was anxious about the date and couldn’t possibly know how she was going to feel when the day came.  “It was all so totally horrible. It felt like a ticking bomb.  So at some point I just thought, ok, just let it explode.”  She observed that in the year since her father’s death, however demanding her day was, “my thoughts go to my dad at night.  I feel his presence in the evening.” Meditating on the uncontrollable aspect of grief, Miller said she wondered if she could choreographically “find the movement language around mourning and loss.”

Miller first conceived the work with a much larger cast “I started with seventeen but got worried that there might be injuries if I didn’t have enough time to work one-on-one with the dancers to build a language together, so I brought it down to six.”

“This isn’t typical of what I divulge about my work, but to be really literal, as soon as I found out my father died, there was an immense feeling of activity and energy. All these things that needed to be solved.  And dealing with everyone’s pain.”

The ballet is scored to elegiac music by composer Arvo Pärt.  Miller assures that “the ballet doesn’t feel like a funeral. In fact, there is all this running around, frenzied movement, onstage and off-stage, which symbolizes a place I can’t see. Then more expressive duets, then the final section, a space for transitions for him and me. Those are some of the starting points of the piece,” she pauses to add, “actually, I don’t know where the ending point is going to be.”

After her Pennsylvania Ballet run, Miller will be back in New York choreographing another new work ‘To Create a World’ with her Gallim dancers, that will have its premiere at the Joyce Theater in spring 2019. 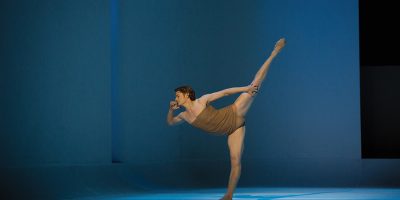 This Divide by Russell Ducker

In his third year in Pennsylvania Ballet’s corps de ballet, British dancer Russell Ducker is busier than ever, dividing his time performing and choreographing.  Doubly intensified this fall, dancing in Romeo and Juliet, and also being cast in Petit Mort while choreographing his own ballet This Divide.

“Yes, my days are split between dancing and choreographing and fortunately Petite Mort is a short, beautiful piece,” Ducker said in a side studio between his Petit rehearsals and choreographer duties. “But to be choreographing while performing in a masterpiece at the same time is still a bit daunting.”

Ducker joined the Pennsylvania Ballet in 2015, audiences here know him former as a versatile corps de ballet dancer with a fine classical technique from his years as a dancer with the Royal Ballet. But he was also on track as a choreographer. Ducker’s has received numerous awards abroad, including the Kenneth MacMillan choreographic award. “Yes, that was a big deal for me,” Ducker said.

“I was very lucky. During my training, there was a large focus on choreography. Everyone has the classes, but early on they thought I had a certain eye for it, so they encouraged me. Lady MacMillan, Sir Kenneth’s wife, presented me with the award.”

Later, Ducker choreographed several works for Corella’s Barcelona Ballet and danced on the “Corella and Friends” tour concerts.  Since joining PAB in 2015, Ducker has choreographed Where the Sidewalk Ends a story ballet based on Shel Silverstein’s famed children’s poems and illustrations. The ballet was premiered by Pennsylvania Ballet II as part of Corella’s inner company choreographic showcase two years ago.  Last year he created a piece that PBII toured in the school outreach program.

“For that, I interviewed the dancers and asked them what they felt like when they were dancing, what they were thinking, and how they approach the stage.” And the choreography expresses their experience- a ballet memoir a la the musical A Chorus Line.

For his new ballet, Ducker was inspired by the music Glenn Branca, who died last May.  Russell read his obituary in the New York Times and became interested in his life and music.

“I looked into his music to see if it would translate well for a ballet score.”  He chose Branca’s Symphony No. 13 (Hallucination City) For 100 Guitars which was first performed at the World Trade Center Plaza three months before the 9/11 attacks.  The work has subsequently been performed by orchestras around the world. Ducker was particularly intrigued because “The music splits into two sections, one a drum line and the other a soundscape that is so abstract with a layer on phantom layer of sound, which inspired the idea for This Divide”.

He characterizes his choreography as being in a “very neo-classical style.”  And is for an ensemble of 15 dancers, half men and the women dancing in pointe shoes.  Ducker didn’t know how his fellow PAB dancers were going to react to his work or “seeing this other side of me, in the role of the choreographer in the studio where I’m very decisive and have a strong will.”

He has little time to worry about it. “The time to create seems so short…, I think because I’m also dancing.  I thrashed out the work in two weeks. And now I’m condensing, clarify the arc of the story I want to tell. I’m getting there, but not completely finished. The pressure feels good actually.”

“There is a moving staircase with a door that moves around, that divides the stage into levels, dancers are in the pit. I wanted to create a physical divide to suggest one group against another. So I divide the dancers into two groups and communicate conflicts and division…” indeed a theme for our time, and intimates that “there is a character that you will follow through this to a transitional moment.”  Ducker said “whether there is a reflection of the current political climate or something personal” is up to the viewer.”  Meanwhile, he has dedicated his ballet to composer Branca with the hope that it will “do justice to his music.”