Leah Stein Dance Company is pleased to announce the second season of Studio Works. This informal in-studio performance series presents movement-based artists who create in Philadelphia. Artist driven, this platform is an opportunity to see new work bridging dance, the visual arts, theatre, and music. The vastly different makers and thinkers in the pilot season will each present their work in the format that suits their process, which will range from soliciting feedback, performing a completed short work, audience engagement exercises, and much more! The series is meant to be a celebration of Philadelphia’s performance landscape through sharing insight into the artists’ diverse, rigorous processes.

Studio Works will be held once per month from October to December at The Art Room Studio, 2329 S. 3rd Street, 2nd Floor, Philadelphia, 19148. The performance starts at 7:00 pm and runs for approximately two hours. Admission is by $5-20 sliding scale donation at the door or online at www.leahsteindanceco.org/donate. 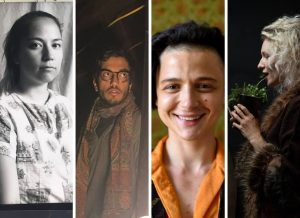 Shreshth Khilani (they/he) is a writer, director, and performer who is interested in telling real stories of love, distance, illness, and food through a magical and dreamy lens. This magic leads them to draw from Indian mythology, folklore, and fuels an interest in traditional forms of Indian art making. In 2018, they created and performed in Table on Table on Table, a radio narrative about immigration and queerness set to a dance performance in an attic space. They invited an audience of 8 to cook with them in their kitchen for Immigrant Kitchen, a mythological performance about the feeling of otherness growing up with their gender and sexuality. Currently, they are working on Sattriya Dance Company’s newest show as well on creating CHEZ VOUS!, a live cooking show shot in strangers’ apartments.

Maddie Hopfield is a dancer, choreographer, and writer from Culver City, California. She grew up studying Shotokan Karate before branching out into modern dance, and more recently, Hip Hop and other urban dance styles. She graduated from Bard College with a B.A. in Written Arts and Dance.Currently, she lives in Philadelphia where she is a writer at thINKingDANCE.net, a teacher at the Children’s Community School of West Philadelphia, and a frequent class-taker at Urban Movement Arts. Maddie performed in the premiere of Leah Stein Dance Company’s Ground Works in the Philadelphia Fringe.

Irina Varina works as a performer and filmmaker in New York and Philadelphia. Most of her projects start out as explorations of life experiences that are hard to put into words or seem too shameful. Her work tends to revolve around women, personal history and the desire to connect and find a place in the world. Her first feature film “Us, Forever Ago” premiered at The 2018 Art of Brooklyn Film Festival. She is currently working on a new solo show called “Russian-American Odyssey”. 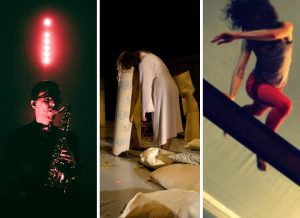 Steve Davit picked up the nickname “Improv Steve” early in his career as a improvisation-loving musician. It started with the Drexel Improv Ensemble led by the late Dr. Myron Moss, which formed in 2008 after attending a masterclass by Daniel Bernard Roumain. Since that spark, Steve has gone on to work with Leah and co. as well as many other musicians and dancers in the free improv scene. When he is not on tour with the electronic R&B duo Marian Hill (as their faithful saxophonist/bassist/dance machine), Steve spends time either recording in his home studio, jamming with Space Whale Orchestra, or thinking/writing about creativity and the mental blocks that obstruct our path towards meaningful contribution. Courage and grit are the cornerstones of his philosophy on creativity – be vulnerable anddon’t give up; we all have something to share.

Puerto Rican dance artist, Marion Ramírez, is dedicated to the art of improvisation as a tool for experiencing bodily agency and empathy. She holds a BFA from The Laban Center London and an MFA at Temple University. Since 2003, she has been immersed in the practice of Kinetic Awareness and Body-Mind Centering®, and is currently completing a Certification in Somatic Movement Therapy (Dynamic Embodiment™) with Dr. Martha Eddy. She teaches Contact Improvisation and Somatics at Temple University, as well in numerous international festivals in Cuba, Puerto Rico, Germany, and the US. As a movement specialist at The Children’s Community School she developed community arts work and curriculum for strengthening of bonds across generations while using a somatic approach to touch and movement.

Annie Wilson makes performances in order to practice survival. Her work has been presented by Fringearts, Bryn Mawr College, JACK, thirdbird, the Center for Performance Research, Mascher, SmokeyScout Productions, and <fidget>. Recent work includes: At Home with the Humorless Bastard, Lovertits, The Remix Festival, At the Gloaming with the Hipster Shaman, and Solo. She is a 2017 Pew Fellow, a 2015 Independence Fellow, an Associated Artist at Applied Mechanics, and an incubated artist at Headlong. Some recent and future artists she’s worked with include: Applied Mechanics, Meg Foley/moving parts, Nichole Canuso Dance Company, Pasion Y Arte, Mary Tuomanen. She bartends Sunday nights at Lucky 13 Pub in South Philly and is assistant property manager at Simpson Mid-town. 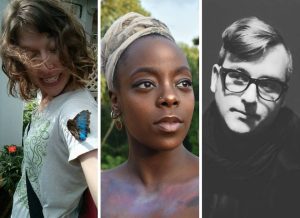 Christina Gesualdi is a Philly-based dancer, choreographer, and movement educator. She is an artist in residence at Mascher Space Co-op where she makes experiential work that researches a certain softness and imaginative off-ness in the body. She is interested in place and criticizes how artists (finger also pointing back at herself) use authorship and ambition in a way that can bolster gentrification, place making and marking while creating static assumptions about solidarity. Currently she is collaborating with sound artist, Jesse Kudler. She has recently danced in work by Annie Wilson, Nicole Bindler, Curt Haworth and fidget.

Ama Gora is a member of Cardell Dance Theater and a writer for ThINKingDance in the Philadelphia community. She has trained with various choreographers including Jessica Chen, Silvana Cardell and Earl Mosley and has performed with the Umoja Dance Company, T.MAJ Dance Company, ErvWorks, and the Seldoms. In 2017, she participated in Urban Bush Women’s Summer Leadership Institute, ‘You, Me, We –Understanding Internalized Racial Oppression and How It Manifests in Our Artistic Community’ in collaboration with the People Institute of Survival and Beyond. She has recently toured Silvana Cardell’s Supper, People on the Move in Asheville, North Carolina. Already in 2018, Gora has premiered two of her own choreographies, Excerpt One: Project ASSATA at Judson Church and The Lost Girls Are Black at the Koresh Artist Showcase. She holds a BA in Dance from Georgian Court University and is currently pursuing an MFA in Dance at Temple University.

Settled Arrows is the music project of vocalist, producer and performer Andrew Mars. The debut album PUBLIC PRIVACY was recorded using collages of field recordings and was called “a beautiful time capsule of modern life and love” by WXPN. The ensemble features an ever-evolving group of international musicians from the rock, classical and experimental music worlds. They are currently working on their third recording.