In the early 80s, the yet to be named AIDS epidemic was decimating the New York and San Francisco’s large gay male populations. The dance and theater worlds in were particularly hard hit and for the next decade untold numbers of artists were lost until the effective anti-viral medications became widely available in the mid-90s. Among them choreographer John Bernd, who died in 1988 at age 35. 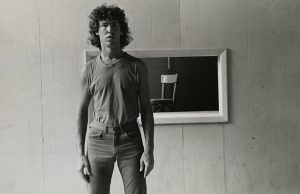 Bernd had worked with such dance luminaries as Merce Cunningham and Twyla Tharp, as well as collaborating with other legendary artists from other fields. Bernd founded the improvisational collective Open Movement in Performance Space 122. He received a Bessie Award in 1978 and in 1986, two years before his death, prestigious New York Dance and Performance Award.  He was at the height of his creative powers, as a dancer, choreographer, composer and interdisciplinary visual artist.

His body of work and legacy to interdisciplinary artists is being explored in “Variations on Themes from Lost and Found: Scenes from a Life and other works by John Bernd” opening this weekend at performances at Neighborhood House in Old City, part of the 2018 Philly Fringe.

Conceived and co-directed by choreographers Ishmael Houston-Jones and Miguel Gutierrez, the piece was developed in New York’s multi-disciplinary Danspace’s Platform in 2016, curated by Ishmael Houston-Jones and Will Rawls, who didn’t want the work of Bernd and the creative lives of other New York dance makers who died during the first 15 years of the AIDS crisis, to be forgotten.

In August, for the day before “Variations on Themes…” opened for a three day at Hudson Hall Opera House in New York, Houston-Jones and Gutierrez were on speakerphone to talk about their work and Bernd’s legacy for a new generation of dancers.

“This became the signature work of the Danspace 2016 Platform,” Houston-Jones said, observing that this new piece “emotional, but celebratory also… It is about loss, but also about finding and reclaiming the work of these people who were lost,” the reaction he said “has been very positive…. It’s emotional, but celebratory also. We did it in Stanford, California and members of John’s family who live in the Bay Area came to the performances and they told us they were very moved by this work.”  The work also enjoyed a sell-out return run at Danspace last January.

“When we started this in 2016, my first impulse was to do a recreation of one of John’s pieces. I quickly realized that that was not going to be possible. Carol Mullens, from Danspace, who is here with us on tour (as lighting designer) mentioned that it was problematic because John, like many artists, was at the center of most of his dance work. So I realized that it would be at best cheesy and probably a good, not thing to do.”

“I talked with Miguel and I showed him a video of John’s work.  We came up with the idea of doing a collage, a mash-up of pieces he made in the last seven years of his life, 1981-1988. There is no dancer who portrays John, singularly in the piece, but there are bits of his solos, bits of his group choreography… a lot of his improvisatory work.” Ishmael-Jones explained.

With such autobiographical works as “Surviving Love and Death” (1982) made the year he fell ill. And for the next seven years continued to create dance and collaborative genre art with such works including “Avant Garde a Go Go” “Be Good to Me” “Monkey Go West” and “Two on the Loose” and his opus “Lost and Found: Scenes from a Life.”

Houston-Jones was also part of the legendary New York downtown dance scene that included Meredith Monk, Jane Comfort, Fred Holland, Tim Miller, and Houston-Jones.  “John was the spiritual center of PS 122 which was new then. And he was in on the early years of that. There was a lot of cross-disciplinary work there.”

Though in and out of the hospital, Bernd continued to work. Not only were there no effective treatments for HIV/AIDS in the 80s, most patients died within two years when they became symptomatic.  Bernd’s infused his personal narrative on the dance stage making him one of the first gay choreographers to represent gay culture at a particularly perilous time in our history,

For Gutierrez, part of the next generation of emerging dancer-choreographers in New York, working with Houston-Jones was choreographically eye-opening. “I did not know John’s work,” Gutierrez intimated, “…coming to work on this project I became fascinated, and obsessed frankly as I realized that all the different ways that people I previously worked with had been so influenced by John, I had with worked or danced alongside him.

“For me it was getting to know a missing piece of the puzzle, realizing all the different ways that people intersected and were influenced by John, collaborating with him or dancing alongside him,”

Gutierrez notes that the young cast- Toni Carlson, Talya Epstein, Alvaro Gonzalez, Charles Gowin, Madison Krekel, Johnnie Cruise Mercer, and Alex Rodabaugh- “didn’t know his work either. And they really have taken this work very deeply to heart. And they feel they are stewarding the work of John, who didn’t get to have the platform he sought during his lifetime,” Gutierrez observed.

“When we started working on the project with the dancers.  We had a residency in upstate NY and we spent the first few nights, each night we watched one piece on video.  Later the dancers saw his solo ‘Surviving Love and Death’, the incredible solo that he made after he broke up with Tim Miller and in fact, he was in the hospital for the first time first time from what was then ‘a mysterious blood disease’ …that they didn’t have a name for.

“That piece is so prophetic and visionary. As young as he was, there were already major themes in this work,” Gutierrez said he had a visceral connection to Bernd’s aesthetic that jumped out at him even from old video clips. There was ritual, spirituality, a folk vibe and a real unadulterated love of movement, the use of his text and music, he sang. His approach and sensibility shines through. It was so enormous for me to discover.”

“We wanted to capture the array of things that he did,” Gutierrez explains, “all his work pointed to the question of what it was to be in the world, or what it meant to have queer intimacy or what it felt like having a vulnerable body. Sensibilities in dance taken for granted now. He was able to power his performers to be themselves.”

Houston-Jones vividly remembers performing in Bernd’s “Lost and Found” series and viewing the archival film of his performances from the 80s he “They go through the 80s; it’s so moving to see on video…you notice the progression of his illness. In the first one he is really robustly dancing, whirling all around…by part three (1985) he was just gotten out of hospital six dance before and you see the progression of his illness and it’s largely improvisational.”

“John was the spiritual center of PS 122, which was new, just founded in 1979, there was cross-disciplinary work there, not totally unique, but very fringy at that point.” Houston-Jones says, “and it’s not just John, it’s about a whole generation of young artists who died and you wonder what their work could have become had they lived.”

It was crucial that both choreographers would include Bernd’s music in the piece arranged and re-mixed by composer Nick Hallett. “retranslated his work from old, creaky VHS tapes and Nick boldly and beautifully enhanced the music really well.”

“We did a lot of digging. We looked at archives at Harvard Library and are using images and drawings that he projected on his pieces and we use them as well. Houston-Jones says that they also were able to use a fixture in many of John’s pieces. “John painted it and had a custom-made travel case for it. The director of PS122 found it theatrical storage after 30 years.”

Gutierrez notes that “Ishmael and I have worked together on other projects of mine…so I feel very comfortable and conceding to his ideas or arguing about our ideas.”  Houston-Jones adds “This has been a such a good collaboration.  … it’s not my piece, or Miguel’s, or John’s… it’s a work that exists between all of us.”

Variations on Themes from Lost and Found: Scenes from a Life and other works by John Bernd runs Sept. 14-16 at Christ Church Neighborhood House, 20 North American Street, Philadelphia |  www.fringearts.com