L.A. based choreographer Ann Carlson’s Doggie Hamlet was the centerpiece dance event at the opening weekend of the PIFA Festival.  It was a unique dance event for the simple fact that it included a flock of sheep, as the captivating idyllic corps de baaah-llet.

Four years in the making, Carlson was initially inspired by David Wroblewski’s 2008 novel, The Story of Edgar Sawtelle, about a mute boy on a dog breeding farm, but borrowing plots from Shakespeare’s Hamlet and Kipling’s Jungle Book.  All of this dramaturg fades into the background of Carlson’s transporting visuals. She dubs the piece a ‘3-D pastoral poem’ as she evokes arresting imagery of her own experience growing up in rural Wisconsin in the 50’s.

This was the first time Carlson attempted Doggie Hamlet in a metropolitan area, though the PIFA staging was in a rural enough setting on the Belmont Plateau in Fairmount Park, even with the Philly skyline rising in the east like Oz.

Rain clouds hung low an hour before the first of three scheduled performances at 10 am on June 3, but sunlight broke through on cue as the sheep made their entrance (to applause) to the cordoned off field, with audience members seated on bales of hay around a wire fence. 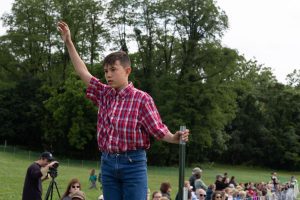 Dressed in a long train shredded red cloak, Philly actor Cathy Simpson dramatically walks through the field, the image of a mystical earth mother. She is followed by a boy shepherd, looking back over the field.  The other trio of actor-dancers follows, as 35 sheep appear, flanked by their real-life herder Diane Cox and her ‘strong-eye’ sheepdog Wull. There are support dogs Monk and Lala with ‘looser-eyes’ who remain mostly on the sidelines until the final scenes.

It is noted in the program that the sheep are primarily yearlings, with a few less “flighty” older ones and one “bottle baby” from last year and who Cox says “thinks she is people.”  They have all been raised on her sheep farm, the Nevermoor Ranch, in Andover NY.

An animal safety manifesto was detailed in the program notes, listing Cox’s “Five Freedoms of Animal Welfare” dedicated to not using methods that would stress, harm, scare or deprive the animals of their natural behavior to get them to ‘perform.’

Indeed, their instinctual herd choreography is fascinating, practically hypnotic. As the human drama unfolds, the flock just keeps grazing, one or two occasionally looking up stoically. But one or two others letting out bleats at the dancers, that sound like critiques on the action.

Wull though had the scouting moves to make the flock scamper, some jumping beautifully and one sailing over the back of another yearling.  Among the many idyllic images came into sight as one yearling separated herself from the herd and just looked at them. It was an image as serenely American as an Andrew Wyeth painting.

The clear scene-stealer is Wull, obviously an Alfa-male method actor and mover. He continued to show his precision technique in his tactical stealth positions and explosive round up bolts across the field. 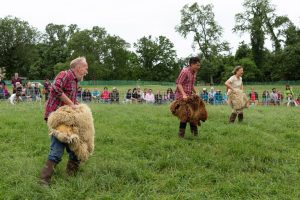 Meanwhile, there is a dance drama happening with the humans.  The performer-dancers – Diane Frank, Peter Schmitz, Ryan Tacata and Imre Hunter, enact the story that Carlson describes as her story of “dogs and death, muteness and sign language, loss and a lot of heart.”

All of the dramaturgs is in the end, distilled by Carlson’s into raw, undecorated choreography. The actors move as if working the land, bodies are angled hard against the land like a plow. They cavort, skip up the hill, each dropping to the ground ominously or dance amok.  They huddle in a familial flock, as the boy shepherd teaches the others his sign language. But darker drama stirs, as they express their own predator instinct push against each other in conflict, they cover themselves from the elements in real shorn sheep pelts.

The cast of multi-discipline performers is primarily from the theater world and academia. They are committed to this production, with its attendant logistical issues, wherever it is attempted. There is an improvisational element, depending on several factors, the animal movements, the terrain, and weather.

Imre Hunter- plays the haunting, noble shepherd body, and Hunter-To is a 7th-grade soccer player and history student. Diane Frank, who teaches theater at Stanford University, portrays the mother with understated grit and grace. Ryan Tacata, a Ph.D. from Stanford and BFA from the Art Institute of Chicago, is the hardened older youth. Peter Schmitz, an actor/choreographer who teaches theater arts, plays the wild and woolly farmer father. Cathy Simpson is an award-winning actor who has performed with many local and national theaters and is a 20-year company member of People’s Light and Theater Company.

Doggie Hamlet, June 3-4 at the 2018 Philadelphia International Festival of the Arts
Photos courtesy of the Kimmel Center