Philadanco artistic director Joan Myers Brown has always been equally passionate about dance education as she has been about her company’s performance excellence.  Brown founded her school in 1960 a decade before she established her company.  She divides her time running the company and the school and recently was becoming aware that students didn’t know what she considered essential dance history, whether they were in her dance classes at ‘Danco studios, in her company and especially if they were students pursuing a dance degree.

To that end she conceived her current program at the Kimmel Center H-I-S-T-O-R-Y, opening this weekend at the Kimmel Center (foregoing holiday fare) that recognizes the indelible contributions of African American choreographers, dancers, educators, and visionaries.  Last week Brown was in her studios in between rehearsals and talked about the program and the people who inspired her.

“The main purpose of this show is to educate my dancers. To what is missing in their history and education about dance as a black dancer and bring the audience in with us,” Brown explained.

Brown said she was particularly surprised that in a class she was teaching with 60 students, both black and white, no one seemed to know who Katherine Dunham was and one student “said to me wasn’t she an anthropologist?” she responded. To which Brown had to tell remind the class that she was a dancer too.   “How can you have a degree in dance and not know these artists?” Brown bluntly asked them.

“I sent letters to all of the colleges that teach dance in the area, telling them to bring students to this show, not because I need to sell tickets, but because the students need to know about these artists. How do you have a degree in dance and not know these artists?” Brown bluntly asked them.

“The kids don’t know them because they are not talked about now.” Philadanco will address that with her performance intervention this week.

One artist who will be performing in H-I-S-T-O-R-Y is the legendary Carmen de Lavallade who also coincidently happens to be in the news right now as a 2017 Kennedy Center Honors awardee.  De Lavallade will be dancing all four performances in a solo choreographed by her late husband Geoffrey Holder.

Brown said that at 86 the de Lavallade the dancer is simply “Beautiful. She just toured her one-woman show “As I see it.” the equally legendary dancer-choreographer Geoffrey Holder, who choreographed works for Philadanco over the years.

Brown noted him as a dance artist who did it all “Dancer, choreographer, actor, director, and (visual) artist. What an incredible body of work he produced. All those things and people remember him as just as the ‘Un-cola man’ in commercial, or maybe from the movie Annie.”

Other works on the program include “A Tribute to Pearl Primus” by choreographer Jawole Willa Jo Zollar, founder of Urban Bush Woman.  Primus was instrumental in introducing American dance companies and audiences to the artistry, techniques and cultural symbolism the choreography represented. Primus trained with Martha Graham, and soon became a solo artist, and was also a sought-after choreographer for dance companies and for Broadway musicals.  Zollar incorporates some of Primus’ own choreography into her dance tribute

Brown wanted to pay particular tribute to “black artists in 30s, 40s, 50s, now when there is little recognition of such good work and other important work they did.  Pearl was a key part the five colleges at that time, that had astute dance programs.”

The first two works on Brown’s history program she admits “are really, really deep,” Brown intimates “but I think artists in the audience will be especially interested. Then in the second half of the show Carmen and Louis Johnson’s piece ‘Forces of Rhythm’ will bring the will bring everybody up.   Brown said that Johnson, who is 87, would be unable to attend the performances due to illness.  Brown cites his groundbreaking contributions as a dancer and choreographer. “What he did for Ailey Company, what he did in opera is so important.  He performed in Damn Yankees in the 50s on Broadway, when blacks were not regularly cast in most shows on Broadway.  He choreographed the movie of The Wiz, with Michael Jackson and Diana Ross.

Choreographer Sonya Dawkins will premiere “Pieces of My Heart” scored to the poetry of African American playwright August Wilson, who was an accomplished poet before he became the pre-eminent dramatist.

“I think there’s a missing link in dance education, so I wanted all my students to know about these choreographers and artists. As for the Philadanco company members performing in the program, Brown assured that they are now, indeed, up to speed on their H-I-S-T-O-R-Y. 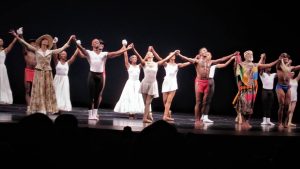