Choreographer Nicolo Fonte returned to Philadelphia and BalletX for the revival of his two-act ballet “Beautiful Decay” for its extended run at the Wilma Theater to open the company’s regular home season. The ballet’s themes of time, aging and the seasons of life is dramatically depicted by two roles Fonte created for elder dancers performing with the younger dancers of the 10-member troupe.

In the ballet’s premiere run in 2013, the guest roles were performed by dancer-choreographers Manfred Fischbeck and Brigitta Herrmann, who will be reprising their parts and rotating performances with author and dance scholar Brenda Dixon Gottschild and her husband, choreographer Hellmut Gottschild, founder of Zero Moving Company.  Local dance legends all-with the lineage going back to late 1960 when Fischbeck, Herrmann, and Gottschild were the co-directors of Group Motion.

With just a little more than a week away from the opening Fonte orchestrated a day of full rehearsals before returning to the coast for Thanksgiving weekend. On a short lunch break, he talked about the revival.

Fonte is one of the busiest American choreographers working internationally, is based on the West Coast where he is resident choreographer at Ballet West and Oregon Ballet Theatre which is run by his husband Kevin Irving. Fonte set the two-act work on BalletX in 2013

The first act is choreographed to the full score of Vivaldi’s Four Seasons and the dancers move through Mimi Lien dramatic architectural structures onstage. The second act is a bare stage and scored to soundscapes and equally propulsive music by contemporary composers Max Richter and Ólafur Arnalds.

Fonte said he was initially inspired to make “Beautiful Decay” after seeing Mark Golebiowski’s 3-D photographs of decomposing flowers years before.  BalletX artistic director Christine Cox wanted to work with Fonte and he was upfront about not wanting to be part of a triple bill dance concert. “I had so many thoughts going into the work, There were the flowers, the desire to use an intergenerational cast and need them to be specifically ex-dancers and of course Christine was so supportive…she jumped right on board and made it happen.”

Fonte said since the premiere run, he had only made “one change in the ballet, “in Oregon during the second act, when all the rooms are taken away, I added four more dancers because Oregon is a bigger company. It was a big hit there too.”

“I definitely have a different relationship with it, now after seeing it on two companies,” he said, adding “yes, of course, there is that terrifying moment of translation from studio to stage.  I thought long and hard about the piece.  Every moment serving a bigger picture and a larger philosophical idea.  Lots of points of departure for me, the photos of the flowers decaying, the desire to use an inter-generational cast. There were lots of points of entry. Some people can experience the whole thing, but it’s important that there are different things that people can relate to.”

“The first time around I was insistent on every single timing thing had to be perfect, hitting the cues and the music track.  Now I know when we get onstage that it will run smoothly.”

For the revival, Fonte would also be working with several new dancers in the company than the cast he had created for the ballet four years ago.  “It was interesting to be back working on it outside intensity of creating it. I’ve seen it on two companies now.  …maybe see where it can it go (choreographically) further or check where is it over choreographed maybe, to edit some things out.”

As for the elder guest dancers, Fonte explained “A lot of the material is simple, it’s task-based,” he said.  “Each elder dancer could interpret moments a different way. I guess the tasks are well defined because they look very similar to three different casts.   But, as it turns out, now seeing the three different casts of elder dancers, it looks much the same. I guess I’m clear,” Fonte jokes “But of course, their personalities are so different, so each brings something so distinctively different to it. Especially that they are all ex-performers and to come back to the stage and allow their history and movement memory to define the performance.”

“I think all of the elder dancers are bringing something different to it,” Fonte observes “their history as dancers become part of their performances. It was another premise to make this work. We are youth-obsessed as a culture. But so is experience and wisdom. We don’t place enough value on that. Specifically, in dance.”

“The ability to slow down and reflect on your life and portray that in an elegant way onstage. step by step showing your life and I think it’s beautiful and cool.  Not to undervalue youth or anything, but after a whole lot of frenzy of movement in ‘Beautiful Decay‘ you see those contrasts.”

“In a metaphorical way, the idea of slowing down. reflect on life and portray that step by step, in an elegant way, showing the history of your life is beautiful and cool,” Fonte speaks admiringly of the elder dancers’ radiance and “stillness” onstage.  “This aspect of the piece hard to communicate in words to younger dancers, they don’t have the experience in their own lives yet. I don’t mean physically, more what the whole ballet could be saying, after weeks of rehearsals … now they are getting it.” 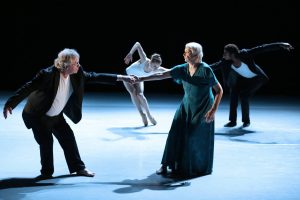 As if on cue Brenda and Hellmut Gottschild stroll into the Performance Garage with the rest of the BalletX dancers.

Moments before the rehearsal began Brenda admitted with a warm smile. “yes, this is totally a different ballgame for us…at age 75 and 81,” Brenda said. They have been together for 30 years and married for 26, and have performed together in various dance-theater pieces choreographed by Hellmut, but this would be the first time they would be dancing in another choreographer’s work.

The Gottschilds toured their dance-spoken word piece “In Bodies We Trust” last summer at Berlin’s international dance festival, Tanz Im August, and performed earlier this year at Woodmere Art Gallery.  All the while Hellmut was still dealing recovering from recent knee surgery when the couple decided to perform in Fonte’s work.

Hellmut mentioned that he was still not completely recovered, “It hurts from the hip area, but when you are over 80 you have to expect something,” but he obviously is overcoming any pain. “Nicolo is really a good choreographer. It’s not the kind of work I’ve done before.  I’ve enjoyed being challenged this way. He knows what he wants… and he gives detailed correction. Sometimes I don’t want to hear them because I’m a choreographer myself.”

Brenda interjects “And Nicolo demonstrates himself, which is so helpful. A choreographer’s dancing body tells the dancers so much more than words.”

Hellmut admits that even though there were moments rehearsing the ballet where he’s “had a feeling of inadequacy. Doing the movement.  And later Nicolo had assured me that I was not inadequate.   Still, I had those feeling, seeing those younger dancers, doing all those wonderful things and going on for hours and being able to remember everything he was telling them.  I thought for a moment oh, I shouldn’t show myself.  So there might be a remnant of that.”

The couple had not seen ‘Beautiful Decay’ onstage in the 2013 performances but viewed a video and Fonte put them further at ease by telling them not to be “beholden” to what they saw, that the concept of the roles for the elder dancers allowed room for improvisation.   “I loved what I saw, there is something about the integrity of the choreography that invited both of us, for different reasons, into it.”

“And, you know, for me it’s so wonderful to work with Hellmut,” Brenda said “but it had been an issue to get him to want even want to work with someone’s else’s choreography.”

Hellmut admitted that he’s “not used to picking up movement from someone else. I still have blanks,” he jokes about trying to remember steps.

When I mention that Fonte just said minutes before that he was very pleased with what each elder dancer is bringing to their roles.  “I guess I get so much into the movement, just doing it. All of the underlying ideas…the age thing, yes we are older dancers, but I’m not thinking of that part of it.”

Brenda concurs “I love the title, but the audience doesn’t have to go looking for the beautiful, or for the decay. Those are subconscious tropes that Nicolo has deployed to pique our intellect or our emotions,” she said.

“What I was attracted by not so much the content or themes, but his sense of individuals and groups in space,” Brenda explains, “I feel that’s the internal information that Nicolo choreographed from,” she observes, “You can just ride along on the beauty of the movement, which in this (ballet) is so skillfully crafted…” and she adds “And, you know, for me it’s so wonderful to work with Hellmut.”

Brenda and Hellmut look get in their respective zones in corners of the Performance Garage for their entrances from either side of the stage. As Fonte assembles the BalletX dancers onstage for some further notes. Hellmut doing a series of deep breathing exercises and lithe postures. Brenda, warming up at the barre at the back of the studio with razor-sharp extensions.

Whatever discomfort Hellmut was experiencing, he wasn’t showing it during the full run-through. Really controlled movement and obviously having fun. Beautiful partnering sequence with Chloe Perkes, on pointe.  The sequence exemplar of Fonte’s fluid choreographic voice with balletic vocabulary and post-modern expressionism.

Earlier, Hellmut expressed his philosophy of dance as applied choreographically and as a performer “Dance doesn’t mean- Dance is.  I am in it, feeling it, serving it, receiving from it…as I give to it. That’s all I need.”

And so it goes.