Christine Cox, artistic and executive director BalletX, said when she walked into the cavernous former auto-repair shop at 1923 Washington Avenue, her first thought was “This is terrific.”  And on a chilly afternoon on November 14, Cox greeted 50 well-wishers who came to the groundbreaking ceremony of BalletX’s Center for World Premiere Choreography (CWPC), their multi-faceted headquarters for dance-arts and education.

The crowd ambled around the high ceilinged, cavernous 5000 sq. ft space, soon to be converted into the company’s studios, office, and permanent home.  As of now, the Center is scheduled to open sometime during the winter months in 2018.

Everyone gathered at the back of the cavernous space as board President Teena Ferroni introduced the ceremony, then Cox addressed the crowd saying, that indeed, it was “A wonderful day for all of us at BalletX.”

In addition to emerging as one of the most acclaimed contemporary ballet troupes in the US, with 63 new works already in BalletX’s repertory, under Cox, the company has established their Choreographic Fellowship program.  Cox said that “The Center will define BalletX’s next decade of dance-making as one of innovation and inclusion,” announcing that there will be 40 new commissions, by 25 choreographers over the next decade.

Marking the occasion as a turning point for the company “After 12 years we are finally about to bring our artistic, educational and administrative impact here in Philadelphia,” adding “our new home will allow us to establish…. stronger bonds” and be a national and international dance center. “The whole next step will be about bridging barriers and communities.”

Cox acknowledged BalletX’s associate director Tara Keating, for being her “anchor and source of daily inspiration” and her voice broke as she thanked Matthew Neenan for being her” co-founder, my partner, my original dreamer.”  Cox and Neenan were dancers in the Pennsylvania Ballet when they co-founded BalletX. 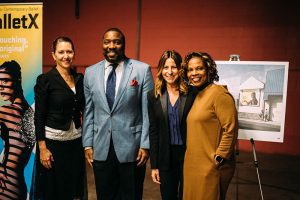 Guest speakers included Kelly Lee, Chief Cultural Officer for the City of Philadelphia, who enthused “I am so delighted to be here and be part of this groundbreaking.  This location could not be more perfect. Because it is sandwiched between two thriving diverse neighborhoods…the arts bring people together.”

Councilman Kenyatta Johnson, representing Philadelphia’s 2nd district, also recognized the importance of the Center to the South Philadelphia community for young people to have a place to “express themselves artistically. .and engage in things that are positive.” Especially, he said, in the current political climate, as national funding for the arts will continue to erode.

BalletX’s Dance eXchange introduces 3rd and 4th-grade students in area schools with a basic vocabulary of dance while fostering personal growth skills like self-confidence, focus, teamwork, and determination.   Cox plans to expand the program to include after-school activities at the Center.

After the official presentation, Cox explained that she originally thought a new company home as primarily a creative lab for new work, but soon realized that it should represent something broader and must be also part of the community.  “I wanted to focus on new work, but not have it be just for as a platform for choreographers and dancers- but also for kids, teachers, and dancers. I wanted our mission to be as big as it could be.”

Cox said it took a while to get used to being the sole company director after Neenan left, but without doubt, the company has continued to thrive.   “When Matt was phasing out of the company.  It took me time to understand how to drive it forward myself,” Cox said.

Cox explained that the CWPC was a “natural progression” in BalletX’s three-phase strategic development plan. It was so clear to her, she remembered that “in the second phase, I was not ready to do take the company to the next level.”  And two years ago they were considering another location for the new center, but things fell through and now, in hindsight, it was kismet, “Each thing that happened, led us to the right spot.”

Last month, BalletX performed at the Annenberg Center and Cox told the audience how proud she was to present her company on that stage because her first exposure to dance was on that very stage because her parents brought her to dance concerts when she was a child.

Her family has a long commitment to arts and community activism. “Both my parents were co-founders of the University City Arts League and they were longtime arts supporters.  I never thought as I was growing up and seeing what they created… that I would do be here today.”

“Even when I was a dancer, it was just never been an easy road for me and it still is challenging.  To find your voice and feel confident.   I always had doubts, but then have to move forward and do the next best thing.” Even if, she muses, “you’re feeling like you are walking to the abyss.  When I start something… I just can’t give up.”

For now, Cox will be leading her company into a new era as they leap over the concrete threshold on Washington Avenue.