Belén Maya is one of the most important female flamenco dancers performing today.  As the daughter of the legendary, Mario Maya, who single-handedly revolutionized flamenco through his choreography and large-format company, Belén was born into greatness.  However, she has managed to build a stellar reputation that’s based more on her own work and personal style than on her family name.  Belén is tremendously prolific, with work oscillating between the traditional and the contemporary, and she regularly tours the world performing and teaching.

Belén Maya will be in Philadelphia leading workshops for beginner and intermediate/advanced flamenco dancers at the Pasion Y Arte Garage Studio from September 17-19.  In preparation for her arrival, we had a chat about her personal experience learning and teaching flamenco.

DJ. What role does being an educator play in your professional life?

Belén: It’s very important.  I began teaching almost at the same time that I began to dance.  I was studying at the National Ballet of Spain’s school in Madrid, which at the time was under the direction of María de Ávila. Just before joining the ballet, I decided against it because at the time they didn’t dance any flamenco.  So I went to Seville and began dancing at a tablao and in my father’s company.  It was upon arriving that I realized that flamenco from Madrid and flamenco from Seville are two completely different worlds.  When I returned to Madrid after dancing professionally for a year, I already had a different view of flamenco, which was that of flamenco from Seville as well as my own personal vision, because I have always had a different way of moving.  So I took that material and started teaching classes in Madrid.

I’ve always loved sharing.  I like to share views and codes, and I like to share what I’ve learned.  I learn a lot teaching, and it makes me question myself.  I too take classes as often as I can.  When I go to the Jerez Festival, I always ask the festival to allow me to study with their guest teachers, because I learn a lot from how a professional teaches a class.  I learn more about their movement codes because teaching means somehow deciphering those codes.  And I take contemporary and ballet classes whenever I can.  Education is vital.

DJ: You father is credited with having taught and molded many of your most esteemed professional peers.  What did you learn from your father about teaching flamenco?

Belén: I didn’t begin studying with my father.  I began in Madrid, and it was only when I arrived in Seville that I joined his company, rehearsing during the day, and working at the tablao at night because I wanted to understand both worlds.  So my father didn’t train me, but I did learn a lot in his company: how he choreographed, his ideas about having a large company for large theatres, how to use the music, how he combined orchestral music with flamenco, which is something he did very well.  But traditional flamenco, dancing soleá and taranto, dancing with flamenco singing and guitar, I learned that at the tablao.

My father used to do a warm-up that started with a ballet barre – as with many things, he was always an innovator – and in Seville at the time it was insane to give flamenco dancers a ballet barre.  Everyone thought he was crazy, but it was obligatory to start class with exercises at the barre, and after that he would do a very good technique warm-up of feet, turns, marcaje, and I do that too in class.  Before beginning with the choreography, I do a very technical warm-up, and the students are thankful because it instills technique, which is important because a problem with flamenco training is that people learn a lot of choreographies and steps, but they don’t have turns, feet or body technique.

DJ: What is unique about the way you teach flamenco?

Belén: I really like to dissect movement and explain very clearly where it originates.  I don’t want students to imitate me.  I don’t like to say “do it the way I do it.”  They should understand from where on my body the movement comes so that they can search on their own body from where it should come, because the impulse may come from a different part of their body than mine.

Flamenco normally isn’t taught in a cold manner; it’s taught through imitation and strength and inspiration.  There’s a lot about feeling the guitar and the singing.  I don’t like to teach that way.  I like to teach from a cold place, coldly analyzing the singing so that students will understand that the lyrics don’t present a closed choreography, but rather that the dancer can change almost everything.  I always say that it’s like a puzzle, and you can put the pieces wherever you want.  The “obligatory” pieces go here, here and here, now you choose where you put the rest.  This way, students will have all of the tools and materials that they need – like a kit – so that they can create their own choreographies and their own dance.  They don’t have to dance the choreography that I’ve put together in exactly the same way that I dance it. 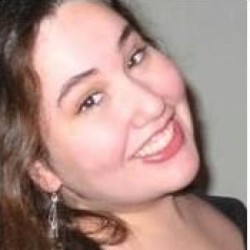 Justine Bayod Espoz
Justine Bayod Espoz is a journalist and performing arts producer working between Chicago and Madrid.She is currently founding a US-based nonprofit called ToritoArts that is aimed at facilitating US presenting of international works.