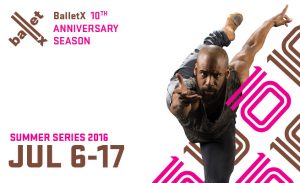 “We are thrilled to present two of BalletX’s most beloved choreographers, co-founder Matthew Neenan and Annabelle Lopez Ochoa. Our collaborator Klip Collective excels at rethinking creative space making through visual technology, which aligns perfectly with our mission to expand the vocabulary of classical dance. We look forward to joining forces,” saysChristine Cox, Founder, Artistic and Executive Director.

“[My] piece will be about the journey of a lone man into the world of Belgian surrealist Rene Magritte,” says choreographer Annabelle Lopez Ochoa.  Working with Magritte-inspired imagery, Klip Collective will design scenic projections to accompany the music and performances.  Skyscapes littered with bowler hats, apples, and windows will come alive in subtle contexts, allowing the dance to remain at the foreground.  “Rene Magritte comes from the same neighborhood as me.  Maybe that’s why I feel the connection to his work,” says Ochoa.  Dance Magazine has praised the Columbo-Belgian choreographer’s work for “making a vital impact on contemporary ballet” with abstract, yet virtuosic movement that creates what Ochoa calls “constructed chaos.”  Ochoa’s previous premieres with BalletX include 2008’s Bare, and 2011’s Castrati and Still@Life; the latter two were recently featured in the company’s 10th Anniversary Retrospective.

BalletX co-Founder Matthew Neenan has been hailed as “one of the most appealing and singular voices in ballet today” (The New York Times).  Neenan’s piece will honor the lateToni Hamilton, writer and longtime friend of BalletX.  Following her passing after a battle with Alzheimer’s disease, a close family member entrusted Neenan with a collection of Hamilton’s manuscripts. “Solitude was important to her writing,” says Neenan, who connected with a side of Hamilton he never knew in life, and found inspiration in the manuscripts’ capacity to intensify his memories of her. Klip Collective will explore the dichotomy of light and dark with a dynamic use of shadows and video projection, incorporating scenic elements right from Hamilton’s manuscripts.  Geometric shapes and optical illusions will create a dramatic environment as the work wrestles with the notion that memory fades, and sometimes reappears in unexpected ways. With Summer Series closing out BalletX’s 10th Anniversary, a season marked by both forward thinking and reflection, Neenan emerges as providentially positioned to woo audiences with a meditation on the mysterious powers of prophecy and recall, while paying tribute to a dear friend.

Klip Collective integrates immersive projection lighting and technology with storytelling to create compelling experiences, which have been commissioned by Sundance Film Festival, Philadelphia Flower Show, Philadelphia International Festival of the Arts, and Longwood Gardens. Klip Collective’s art reel can be viewed at http://www.klip.tv/

The Summer Series 2016 sponsor is the William Penn Foundation, Toni Hamilton Memorial Fund, and the National Endowment of the Arts.