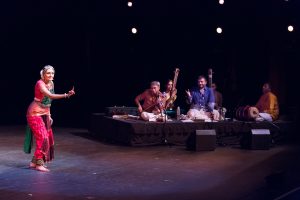 A deeply complex practice, Bharatanatyam conjures, history, politics, and culture. Known for its grace, subtlety, and sculptured poses, Bharatanatyam is said to be one of the oldest classical Indian dance forms. Because I’ve had infrequent brushes with the form, I possess limited experience in offering criticism, but nonetheless, I will lend my senses to what I witnessed and share my documentation of the experience.

Inside the lobby of the Annenberg Center for the Performing Arts, a community connected by culture gathered to witness the world premiere of Saayuja (The Merging). Conversations between friends and family members, turned the entrance to the theatre into a junction where generations merged – the celebration had begun.

Presented with support from The Pew Center for Arts and Heritage, and Sruti, The India Music and Dance Society in collaboration with the Annenberg, this world premiere was created by renowned artists T.M. Krishna and Priyadarsini Govind, both from India.

Because of the information provided on the website www.nrityaniketa.com, which affirmed that the music used in Bharatanatyam was traditional Carnatic music from South India, I questioned what was written in the marketing materials as it stated, “these preeminent artists initiate a ground-breaking new collaboration to connect the true spirit of Carnatic music and Bharatanatyam.” I couldn’t help but wonder what exactly was groundbreaking. Maybe it was the fact that this alliance was influenced by Philadelphia’s place in history. And one didn’t have to look far to see the theme of freedom, which is often synonymous with Philadelphia. There was freedom in the organically symbiotic collaboration, freedom in the movement, and freedom in how Bharatanatyam continues to evolve. 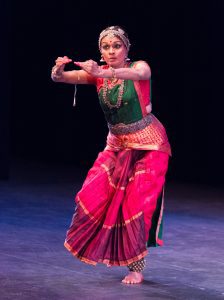 Adorned in hues of green and red, Govind wore richly textured fabrics that were trimmed in gold. Draped around her dancing body, her garb spoke its own history and sang its own song. The accordion like skirt created a fan each time she placed herself in a seated or half-seated position.  Govind displayed mobile fingers and wrists, and articulate feet. She touched her palms with fingers splayed, while producing sounds from the bells she wore around her ankles, by clattering the stage with her calcaneus. The downward diagonal placement of the arms performed with bent knees, were repetitive motifs as Govind took time to pull her pinched fingers back to her informed body, sometimes pausing to cross her wrists. This was illustrated by the compositional make up of Govind’s gift.

In one composition, Govind danced the tale of a mother whose small son died in war. News of his death branded him a coward as the tale mentioned him being struck from behind, suggesting he died running away from the battlefield. With some shame, the mother went to the battlefield only to find the body of her slain son and realized the fatal wound was from the front; her son had died a hero.

Govind gave her body to the story by transforming the narrative from a tale to a movement ritual. Pairing well with the melodic abstractions of Krishna, whose vocal chants trembled as he changed octaves, Govind vibrated her hands while stomping her feet. She moved with precision, often times isolating her neck as if it were a single stone on an abacus. It was in these intricate details that I imagined how Bharatanatyam could evolve from an ancient temple dance to a form that could initiate contemporary conversations.

In their vocal narration, Govind and Krishna articulated the importance of asking questions and hammered home the relevance of equity and fraternity in all spheres of life. Part story telling and part culture sharing, Saayuja was more than the merging of art forms, it was the intermingling of cultures and politics making Saayuja politically relevant, culturally bold and artistically inclusive.