by Lewis J. Whiitington for The Dance Journal

New York based director-choreographer Rajendra Ramoon Maharaj, artistic director in residence at the The New Freedom Theatre will be premiering his new play The Ballad of Trayvon Martin in May.  The play depicts the last seven hours of Trayvon Martin,  the 17 year-old unarmed African American who was shot to death by neighborhood watch volunteer George Zimmerman in Sanford, Florida in 2012. Martin’s death touched off a national dialogue on racial strife in the US and his legacy lives on through the Black Lives Matter movement.

Maharaj co-wrote the play with Thomas J. Soto and it “melds” text, music and choreography to create a “poetic docudrama the director said in a phone interview last week between rehearsals.  “Trayvon’s story that lends itself to a format where you can pull different theater elements together, as a director, writer and choreographer, I have to be kind of a theatrical chemist.”

“Trayvon was a young black man who loved hip-hop music and dance, I knew that they that fact would be a key way in which to tell his story. What was most inspiring to me was to be able to take Trayvon’s spirit and translate it throughout the play with two male dancers.”

“It becomes part of a tapestry of his life and his legacy- music and dance through hip-hop. He grew up in the church so there is also spirituality. Dance has been such an important part of African American narrative,” he said.

The specters of the slain teen function as “guide to interpret and reveal Trayvon’s emotional life,” the director explained “because when the show starts we are literally in Trayvon Martin’s mind and he is experiencing being shot. That it allows us to see how this young man was processing the world.”

“Julian is an alumnus of Temple Dance and very gifted,” Maharaj said, “And Stanley Morrison is in Patricia Hobbs Dance Academy at Freedom Theater,” Maharaj noted Morrison’s “strong technique and pathos as a dancer. Then I saw Julian at the audition and he also such a stand-out.  Both dancers “are really up on the language of hip-hop and what is happening now in choreography, so it keeps me fresh as a dance- theater storyteller.”

In addition to hip-hop idioms, Maharaj incorporates a range of vocabulary, including ballet, jazz and modern techniques, throughout the play. He worked closely with composers Paul Wilt and Richard Jermain at realNoise, LLC in New York to develop a musical score that would support mixed genre choreography.

Director Maharaj started his career as a dance student hoping to get in Alvin Ailey II, and recalls that pivotal “point when I came to realize that I was not as disciplined as I needed to be and didn’t have the heart behind it to pursue the life of a professional dancer. Actually, even my instructors noticed that I was more interested in creating pieces, so it seemed clear that I was leaning toward being a director and choreographer.”

In addition to starting The Rebel Theater in New York, Maharaj directed and choreographed a wide slate of classic plays and musicals for many companies including The Public Theatre and Classical Theater of Harlem. In Philly, he  directed his historical drama “Little Rock” at Passage Theatre, which took the 2015 Barrymore Award for Outstanding Ensemble.

He has been greatly influenced in his career by artists who take on hard subject matter and address societal problems, despite the commercial risks. “I always believe in the power of artists and activists… going back to the artists participating in the black civil rights movement of the 50s and 60s… and now with the Black Lives Matter movement. It is our opportunity to educate and illuminate the human spirit.”

The project at The New Freedom Theater has created “a real buzz that we are creating something special here. Both in the Philadelphia Theater and especially in North Philly. We’ve had people see the banner announcing the play and have been coming the building buying tickets on the spot.”

Maharaj believes “theater is a powerful platform for social justice. With Trayvon’s death and Eric Garner, Michael Brown, Freddie Gray, Tamir Rice…so many others, all with similar circumstances. We have to put it out front. The way for me to do that is through theater…the thing I love the most.”

Mararaj will direct continue his residency at The New Freedom Theatre over the summer, directing productions of the revival of the 50s Harburg/Arlen musical “Jamaica” which starred Lena Horne and featured a young dancer named Alvin Ailey and Micki Grant’s 70s hit  “Don’t Bother Me I Can’t Cope.” 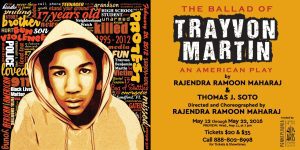 The Ballad of Trayvon Martin runs from May 11-22 at The Freedom Theatre, 1346 N. Broad Street, Philadelphia, from May 11 through May 22-  for performance times and tickets check www.freedomtheatre.org