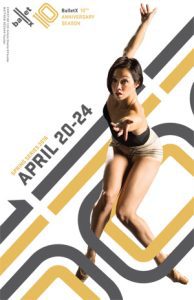 BalletX honors 10 years of “three-dimensional dancing you feel as you watch” (The New York Times) with a 10th Anniversary Retrospective of excerpts spanning from each year of the company’s history. Curated by BalletX’s artistic team, the program will transport audiences through a virtual “greatest hits” panorama of the company’s diverse repertory, showcasing a decade of evolution and range. The Retrospective features works by some of BalletX’s most vital collaborators, including BalletX co-founder Matthew Neenan’s, Frequencies (2005) and The Last Glass (2010), which will remind us why he has risen to acclaim as “one of today’s foremost dance poets” (The New York Times).

BalletX will also present a world premiere by Kevin O’Day, internationally renowned choreographer and Artistic Director of Kevin O’Day Ballett Nationaltheater Mannheim. A former dancer with Mikhail Baryshnikov’s White Oak Dance Project and Frankfurt Ballet under the direction of William Forsythe, O’Day’s unique creative process has been praised by The New York Times as “capturing the spirit of the times in which he lives.” His new ballet will feature an original composition by John King, performed live by Curtis Institute of Music alumna Wendy Sutter, hailed as “one of the greatest cellists of the classical stage” (The Wall Street Journal).