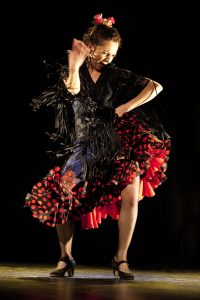 PyA is ecstatic that Spanish flamenco star Rosario Toledo will return to Philadelphia to perform for TABLAO PHILLY. Ms. Toledo was a featured performer during the Philadelphia Flamenco Festivals of 2012 and 2014, delighting local audiences with her unique and powerful performances. A master dance artist, Ms. Toledo re-imagines traditional flamenco through layered storytelling and humor, challenging the limitations of gender roles. Initially trained in Spanish dance and classical ballet at the Conservatory of Dance in her hometown of Cadiz, Toledo graduated from the prestigious Conservatory of Dance in Sevilla. She began her professional career in a production of Charo Cruz in 1994, and the following year performed with Manuela Carrasco, a major accomplishment for a young dancer. Toledo has worked with top flamenco artists, including Israel Galvan, Antonio Canales, Javier Latorre, Eva la Yerbabuena, Belen Maya, Manuela Carrasco, and El Guito, among others. She has collaborated with internationally renowned singers and musicians such as Jose Merce, Miguel Poveda, Duquentde, Jose Antonio Rodriguez, and Arcangel.

In 1998, she won two awards at the 15th National Flamenco Art Competition in Cordova and performed at the 10th Bienal de Flamenco in Sevilla, the latter in a production by the renowned dancer, choreographer and director, Mario Maya. Toledo was awarded second place in the prestigious Festival de Las Minas de la Union and thereafter was much sought after as an invited artist outside of Spain, such as in Tokyo and Paris, and entered into a series of individual performances with Joaquín Grilo, Javier Barón, and Israel Galvan. Toledo’s dance and choreographic work has been seen at numerous international festivals and venues, including the Biennial of the Art of Flamenco in Sevilla; the Festival de Jerez in Cadiz; the Festival of Ciutat Vella in Barcelona; the Crec of Barcelona; the Festival of Flamenco in Monterrey, Mexico; the House of Culture in Paris, France; the Teatro Central de Sevilla; the Centro Cultural del Monte in Spain; Gran Teatro Falla in Cadiz; Festival Grec of Barcelona; the International Festival in Volubilis, Morocco and the Wuppertal Festival in Germany. Toledo’s choreography, which has consistently received prominent critical attention and acclaim, include: “Pura intencion”; “Contrastes”; “Alquimia” (a collaboration with renowned guitarist Jose Antonio Rodriguez); “Alicia”; “El Aire de Cadiz”; and “Del primer paso.”  In April 2012, she was commissioned to create “Complices” for Pasion y Arte for the 1st Philadelphia Flamenco Festival. The featured artists of Pasión y Arte will include guitarist Behzad Habibzai, cantor Hector Jose Marquez, percussionist Adam Bailey and dancers Alexa Miton, Xianix Barrera, and PyA’s Artistic and Executive Director, Elba Hevia y Vaca.

Reminiscent of the cafe like environment of the 18th and 19th century tablaos of Spain, TABLAO PHILLY  recreates for the first time in Philadelphia a contemporary tablao experience. Originally tablaos were comparable to beat poetry cafes or improvisational jazz clubs, where diverse audiences would gather to drink, eat and enjoy music, rhythm, and movement by masters of the flamenco art form in an informal atmosphere of merriment. Philadelphia audiences will have the unique opportunity to participate in this classic experience as the intimate black box theater of the Asian Arts Initiative is transformed into a tablao where they will enjoy wine and tapas as they witness some of today’s most respected and well known flamencos exhibit their craft.

Together, PyA and Rosario Toledo will present a memorable evening of flamenco dance and music as they each seek to display their own unique personal interpretations of the art form in an intimate tablao setting.