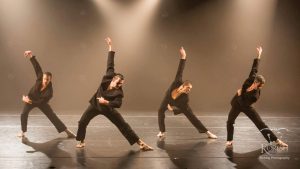 by Gary L. Day for The Dance Journal

The Koresh Dance Company is pretty much at the top of the heap in terms of modern dance companies here in Philadelphia. They are just about the largest, the oldest—they are in the midst of 25th anniversary celebration—and arguably the best.

Titular Artistic Director Ronen Koresh (called Roni by some) unveiled some world premier work to celebrate their 25th anniversary as a company, and I have to wonder of Koresh is capable of producing work that is not extraordinary.

The evening started out with a brief sample from the Koresh Youth Ensemble, Les Petits Loups, choreographed by Melissa Rector. It was a pretty basic beginner’s piece in the style of Koresh; the choreography was reasonably simple and the dancing adequate for students.

The main program began with a challenging piece called New Philosophy, choreographed and costumed by Ronen Koresh himself. This was composed of nine separate pieces of different size, many with original music. Koresh’s pieces are very much in the style of modern dance, as opposed to ballet, in that Koresh is less focused on telling a story as he is in experimenting with movement that may or may noir evoke an emotional response.

While each piece was different in many ways, there was nonetheless a common stylistic approach that tied them all together, the best descriptive I can think of is rhythmic dramatic strength. The dancers’ movements were fluid and confident, well-syncronized with the music.

The high point for me was the final segment, called 23: Deconstructing Mozart. In it, choreographer Koresh worked on the soundtrack with Paul D. Miller (aka DJ Spooky) to transform a short Mozart piece in into a dark, atmospheric epic on which to hang his increasingly abstract moments. This piece, too, was episodic in structure, though the transitions were less defined and abrupt than in New Philosophy. Of course, Deconstructing Mozart was meant to hang together as a whole long piece, which actually told a story.

With the addition of narration (by Karl Mullen), took on the task of describing the ultimate beginning, the Big Bang itself. The soundtrack, which was reminiscent of Tangerine Dream in its cosmic period, provided a framework for the powerfully tribalistic choreography; add the hypnotically poetic narration, and the final result was nothing less than awe-inspiring. This is truly a major work.

The company of dancers was uniformly excellent, strong, precise and disciplined. No one stood out or stole the show because everyone was equally skilled. If I had to pick out any, though, Micah Geyer had a solo in one of the segments of New Philosophy where he easily commanded the stage by himself—not an easy task.

The costumes, designed by Koresh, were simple, basic and flattering. If I had any complaints, they were small ones, doing with the lighting. Alyssandra Docherty’s lighting design was meant to create dramatic shadows for the dancers to move in. There were sections here and there where more light on the dancers would have been welcome.

Ronen Koresh’s often abstract choreography is a wonder to behold, but it often is not easy for a critic to describe why it’s so effective. But sometimes, that’s the effect great art has on its audience. It inspires awe, sometimes beyond the capacity of words to describe. Maybe I should finish with that being my highest recommendation.

Gary L. Day
Gary L. Day is a produced playwright, director/producer and critic who has been covering the arts in Philadelphia since the Clinton administration. In addition to The Dance Journal, he also writes for the Broad Street Review and the Philadelphia Gay News. He has worked as an editor, an illustrator and a bar manager. He is also an expert on all things Star Trek and Captain America.