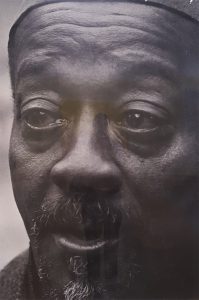 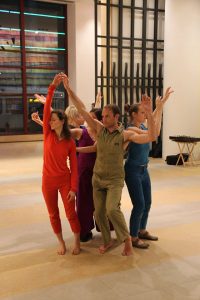 Said to be “the first comprehensive museum overview of this influential artist, who was a pivotal figure in American art, a participant in the Harlem art community, and a politically –conscious activist,” the exhibition Procession: The Art of Norman Lewis (1909-1979) opened at the Pennsylvania Academy of Fine Arts on March 9th.

Born to Bermudan immigrants, Norman Wilfred Lewis was a native New Yorker who grew up in Harlem where he was a lifelong resident. His experience with racial inequality from an early age, had a major impact on his work life causing him to focus on the struggles of black Americans in his art. [1]

It is said that in the 1940’s, Lewis began to explore abstraction and in a 1968 interview, expressed his skepticism about the power of art to effect change. Eventually, his artwork shifted from from social realism to Abstract Expressionism.

Over 90 works of art and writing, spanning four decades, were on display and dancers from the improvisation based Graffito Works, acted as vehicles of interpretation to the art viewing experience. Eleven dancers, dressed in solid colors, painted the space with their bodies. Sometimes they acted as extensions of the artwork based on the color they were wearing, or at other times they worked intuitively to imitate the shapes portrayed in the pieces.

Knowing Lewis was an African American artist, my interest was peaked by the fact that there were no African Americans in the group of improvisers – people of color (Asian, Latina), but no one black. I would be lying if I said I wasn’t concerned about black art represented through non-black bodies but nonetheless, I welcomed the experience I was about to have.

For one hour the dancers moved from piece to piece, creating divergence from or visual aids to Lewis’ works. I secretly wondered if choosing a piece of artwork to interact with, was left up to the dancers or had been pre-planned. 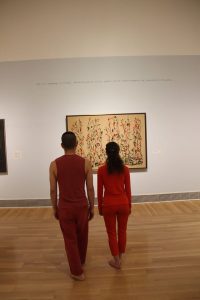 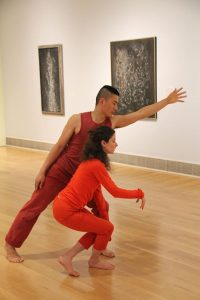 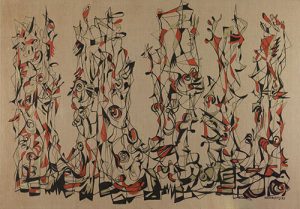 With their backs to me, dancers Jung Woong Kim and Marion Ramirez stood looking at a painting (title unknown 1953), as if trying to make sense of it. Ramiriez glided in front of Kim and a carefully timed improvisational game played out. He moved towards the painting and she moved towards him. Their collaboration appeared to be a conversation, but instead of waiting to speak after the other person, they would finish each others sentences. No moment so evident of this fact as when Kim claim the space, as Ramirez stood on one leg. As soon as Kim found a moment to pause, Ramirez continued the flow, as if her body was in motion the entire time. 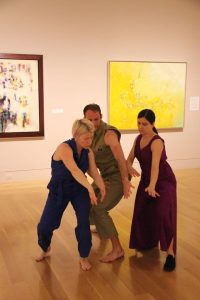 In what appeared to be a planned trio, three dancers mirrored each other, spoking and arching as they changed shapes. Dancers Beau Hancock, Meg Foley, and Loren Groenendaal, wore beige, purple, and blue – the same color scheme as the painting [title unknown I (Carnivale aka Tounament), 1958]. They were harmonious with the artwork, finding moments to touch one another before darting into the space, waiting for the others to pull them back in. 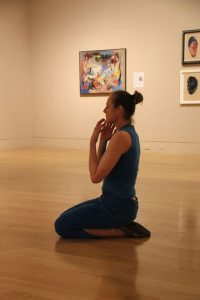 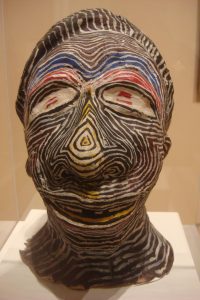 The Head (mid-1940s), a sculpture that appeared strikingly sad, stood alone a one of the few pieces that wasn’t on canvas. Dancer Asimina Chremos sat on the floor, motionless.

There was something robust about her still energy; a grandness that was unseen. The energy intensified when she started touching her face; as if she were copying the lines that were present on the sculpture. In grave contrast, dancer Loren Groenendaal conquered the space with kinesthetic vigor. She galloped all the while making sharp angles with her arms until she modified her dynamics, making room for a freer, more relaxed energy to invade her former briskly moving body. Her vibrant display made me fixate on her textured form, yet I was denied confirmation with regards to which piece of work influenced her.

My prior concerns regarding black art being interpreted by non-black bodies receded as this performance provided equitable hope of integration – at least while I was in the space; in that moment.

All photos courtesy of Graffito Works in collaboration with PAFA