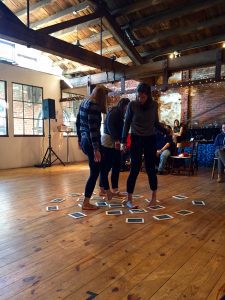 On Sunday I had the pleasure of watching a showcase by an emerging dance company, Coaction Dance Collective. The show was presented in the MAAS Building in South Kensington, an incredibly intimate space with audience on both sides of the performance space. Local artists surrounded the audience, making it something like an indoor arts festival with a headlining dance performance. Coaction’s founders, Gracianna Coscia, Emma MacDonald, and Julee Mahon each presented a piece of their choreography, leading up to the show’s title piece and their first collaborative work, “Whole: Without Any Parts Missing”. Each piece showed the choreographer’s strengths and uniqueness.

The show opened with “The Turning Clock” featuring Gracianna Coscia, an intimate piece done in collaboration with her mother, Tricia Coscia. There is no music; instead, the beat of the piece comes from a live poem reading by Tricia. The connection between mother and daughter is palpable as they adjust their rhythms in real time. Coscia performs a technically difficult dance requiring an incredible amount of strength and control. She imitates the precise movements of a clock, ticking along to her mother’s poem. She uses the space powerfully, alternatively facing both sides of the audience to pull them into the performance.

“Mi Vida” featuring Emma MacDonald, a celebration of her heritage, was the most free form of the show. MacDonald involves the audience in a special way, handing out pictures of her grandparents to everyone in the audience as she dances. The dance is slow and personal, being less about the specific, technical movements and more about how she uses her movement to make a connection with the audience, and therefore the grandparents she is honoring.

“Frusta…Bene” (a playful translation of “Whip it…Good”, a reference to the Devo song used towards the end of the piece) is the strongest of the set, a lengthy and well designed piece featuring five dancers, Katie Horton, Allie Linn, Emma MacDonald, Joanna Martin, and Molly Woytowicz. Choreographer Julee Mahon described it as a “exploring problem solving techniques” and I got a distinct schoolyard/youth type of vibe from it. Each dancer has their own distinct personality expressed through their movement. The piece begins a cappella, with the dancers in apparent conflict, struggling against each other for attention. The choreography is complex and the sheer amount of control and cooperation required to do it is astounding. Halfway through the performance they face the audience on both sides and burst into hysterical laughter (perhaps as a reflection of the absurdity of their struggles?), and then repeat the entirety of their choreography at almost double speed, set to an arrangement of Devo’s “Whip It”. The difference between the two halves is almost like night and day. The dancers are much more physically involved in their performances in the second half, pushing themselves to almost chaotic levels.

These performances would have been excellent on their own, but together they built to the main piece, “Whole: Without Any Parts Missing”. Prior to the show, audience members were invited to answer questions on miniature chalkboards. The questions ranged from things like “Describe Philadelphia in 1 word” to “Draw a picture”. Anyone who wanted to was able to inject a little piece of their personality into the show. The chalkboards were brought out by the trio and placed around the floor as they read aloud what the audience wrote. They then danced around and through these chalkboards, in perhaps the most interpretive performance of the show. It felt like it was about the things that connect us and make us whole, when we’re feeling the most incomplete. The choreography involved quick, repetitive motions that seemed to be the dancers holding themselves together. At times they leaned on each other for support, and that’s when they discovered the chalkboards, where words like “Home”, “Love”, and “Mom” were common. They end by coming together again in reflection, finally whole.

The entire night was filled with clever and profound performances that make me excited to see what this company will do in the future.

Alex Strine
Alex Strine is an award winning screenwriter, critic, and filmmaker. He specializes in reviews of fiction, children’s books, and graphic novels. His work has appeared in Weal, WinkBooks, and Cracked. In 2015 he was a finalist in the Nickelodeon Script First Contest.