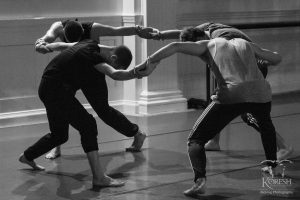 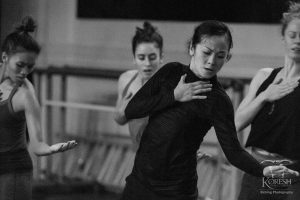 On Tuesday, February 16th, the dancers of Koresh Dance Company held an open rehearsal to share excerpts from two new works – 23:Deconstructing Mozart (scheduled to premiere next month at The Suzanne Roberts Theater) and New Philosophy.

Knowing that artistic director Ronen Koresh was the choreographer for both works and the fact that I would only be privy to an except, I was skeptical about how similar the pieces would be and the fact that excerpts usually lack context. But surprisingly, they were different and even without context, served as adequate representation of their larger works.

While Koresh’s trademarks body – slapping, vocalization, and percussive steps were flawlessly executed in 23:Deconstructing Mozart, it was the mercurial composition of DJ Spooky’s musical soundscape, that kept me invested.

In the section from New Philosophy, I was reminded of Koresh’s gender – neutral approach to choreography, as I watched both men and women perform similar steps with grounded stance and intense physicality. They cannoned through phrases, always finding moments to incorporate floor work, while individuals frequently moved in and out of group sections, in an attempt to variegate the plethora of unison.

Yes it was a rehearsal, but dancer Krista Montrone stood out for all the right reasons. In her fifth season with the company, Montrone is a perfect combination of passion and power. A technically sound performer, Montrone commanded her sections as only a seasoned Koresh dancer could. A distraction for some, the mirror only aided in supplying Montrone with the minimal help she needed to be one with the group.

In the question and answer session that followed the studio showing, the dancers were asked if they approached rehearsals any differently than they would a performance.

“We’re always performing,” explained dancer Kevan Sullivan, “even in rehearsals…… it helps us find moments to understand what it is we’re trying to convey.”

I’ve seen the company on stage a few times and their level of intensity, attention to details and command of the movement vocabulary, was just as effective in the intimacy of their Rittenhouse Square rehearsal studio. And while any performance can be said to be the final stage of a creative process, open rehearsals are legitimate spaces where some get to see a piece of work come together before a night out at the theater.