2016 Philadelphia Screendance Festival, a Success in its Inaugural Year 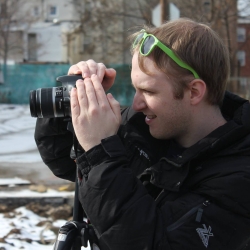 My own personal experience with screendance is having a judge tell me in an instructional tone that my film “wasn’t so much a dance film as a film with dance”. Thankfully, Nora Gibson of Nora Gibson Contemporary Ballet has made no such distinction in the curating of the Philadelphia Screendance Festival. The films here are extremely varied, running the full spectrum from experimental films focused more on movement than dancing to dance pieces that could almost be classified as music videos. Gibson herself happily proclaims that the only guidelines for submission were that the films involve movement and use the camera as a “choreographic tool”. What we get are some incredibly inventive films that use dance and movement in ways that occasional defy categorization.

Gibson seems to have taken great care to make the categorization problem easier for us by arranging the program for maximum understanding. The festival is split into three programs, aptly named “A” “B” and “C”, each one following a loose theme. I attended program A on opening night and was granted an advance look at programs B and C. Program A features the most eclectic mix of films, mostly experimental in their approach to movement. Program B is my personal favorite, containing a more narrative focused set of films exploring the interactions between movement and the world around us. Program C is composed of some of the most poetic films of the festival. All three programs are worth seeing, regardless of where your tastes lie.

No two films anywhere in the festival are alike, even if they at first glance appear to cover similar subject matter. For instance, two films in Program A feature aerial silks, but their approach to the technique is so different you would never confuse one for the other. Instead the films complement each other and make for a stronger viewing experience. This is my personal amazement, having seen plenty of festivals that seem bent on programming only a certain type of film. Each film here is perfectly unique. No one is guaranteed to love every film, but certainly everyone will walk away loving at least one every night.

My favorite film of the festival, “undertow”, produced by siblings Holly and Duncan Wilder, can be caught during the B Program. Using only two dancers, Holly Wilder and Santiago MacLean, two basic locations, an umbrella and some smooth choreography, “undertow” tells a coherent story about the pressures we feel around us. It’s an expertly crafted example of how the simplest concepts can be the strongest, using camera and editing not only to tell the viewer which parts of the dance are most important, but also to cut between locations for stronger narrative effect. No other film in the festival integrated the dance and film mediums so strongly. This is a dance piece that could really only exist as a film.

The Philly produced “chrysalis” (Program A) is another example of a piece that requires film as its medium. One of the more experimental films in the festival, filmmaker and performer Zornitsa Stoyanova leans on editing techniques like layering and mirroring to tell their story. While the film runs a bit longer than it should, it’s a film that leaves a lasting image of its strange movements in your head. Another Program A highlight is “Rorschach”, directed and choreographed by Ashley Marinelli. Probably the most fun piece of the festival, “Rorschach” explores the power of dance to brighten our lives. The dancers cover themselves in paints of varying colors and then splat it all over Marinelli’s apartment. This is a film that will certainly leave you smiling.

Program C’s stand-out film (possibly my second favorite) is “Beyond the Frames”, a beautifully poetic film directed and choreographed by Tanin Torabi in Tehran, Iran. Torabi’s film is not to be missed, filmed in stark black and white inside what appears to be an abandoned or partially destroyed house. Iran is not kind to dancers at the moment and you can feel the need to break out bursting through the dancers’ performances.

The Festival itself is presented in a humble setting in the Christ Church Neighborhood House Theater. The whole evening has a low tech quality to it that I found charming in comparison to larger festivals. Nora Gibson herself came out to introduce the program and even stuck around afterwards to answer a couple of audience questions, which turned into an impromptu Q & A with some filmmakers who happened to be in attendance. There is of course no guarantee this will happen the other nights, but the fact that it happened at all was a welcome treat and I would encourage audiences to engage any filmmakers they meet. I would call this inaugural year of the Philadelphia Screendance Festival an artistic success, and I’m interested to see what they can cook up in future years.

Program A is set to run again on Friday 2/19 at 8:30pm, while Program B is scheduled for Wednesday 2/17 and Saturday 2/20 at 8:30pm, and Program C is scheduled for Thursday 2/18 at 8:30 and Sunday 2/21 at 4:30. More information and tickets can be found at http://www.noragibsoncontemporaryballet.com/2016-philadelphia-screendance-fesitval.html

One reply on “2016 Philadelphia Screendance Festival, a Success in its Inaugural Year”