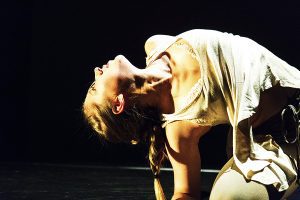 It is sometimes difficult to find an entryway into works of art that are specific to certain communities because of context and content.

Reviewing the pieces from Femme Collectives’ Cherchez La Femme posed a problem as the evening showcased works by women who were mostly white. Here I was, a black man, entering into such a world, attempting to shed light on the works of a demographic to which I had very little connection. Of course I have female friends, colleagues, and family members, but sifting through art that depicts the lives of any group can be problematic when you stand on the periphery.

But, I will attempt…. not to critique but to offer perspective through one male gaze.

Listed as a group of female-centric artists, Femme Collectives’ main objective was to bring more art and artist collaboration to the Philadelphia area, “sprinkled with lady power”. But is it ever relevant or justifiable to have a platform that allows any group of people to predominantly serve their specific community?

Absolutely! Whenever a group of people is marginalized, resulting in disproportionately less visible representations, I would argue that those platforms should be supported and encouraged.

Choreographed by Leila Cordova, in collaboration with her dancers, Let me….. Provokes thoughts about the feminine identity. High heels were used as a physical reminder of the accessories so many women used to reveal their image – how they wanted to be viewed. In an article for Psychology Today Magazine, Alyssa Siegel listed those images as businesslike (pumps), tough (thigh high leather boots) or grounded (Birkenstocks).

The dancers strutted in heels performing rond de jambes and lunges. Sometimes, the shoes served as a reminder of the various ways women are able to texturize their identity. I questioned if investigating more ways of incorporating the prop into the piece may have proven to be a little more successful.

My past has taught me that miming the words to songs can give the audience access to the stories being told. Love sick was no exception. Choreographer and performer Michelle Megill donned a white dress reminiscent of a bridal gown and sporadically physicalized the words to a song by hozier. Carrying a bouquet that was eventually tossed into the audience, Megill’s broken lines and bound flow movement were seemingly signs of an angered lover…. a frustrated bride…….. a woman scorned? Tidying her delivery of more technical steps, may have increased my investment but one can never go wrong with energy, of which she had plenty.

With tactile precision and rhythmic athleticism, the quartet do I change “me” for us? was carefully crafted by Caroline O’Brien, who danced alongside Mary Stickney, Rebekah Richards, and Alexis Dispenziere. Sliding through the space, they articulated their bodies, waving with smooth transitions from solos to being one with the group.

Security in sabotage started as a melancholy solo that ended in youthful exuberance. A theatrical undertaking choreographed and danced by Laura Behr, the piece seemed to be about a memory…of life lived…maybe love lost….or perhaps hope regained.

Maybe it’s because I was ambivalent due to the not so pristine technical adeptness of some of the dancers or the lack of choreographic sophistication in some of the pieces, but I was drawn to Coaevum. It enveloped emotional subtleties and a clear through line that showcased dancer Devon Lutz as a proficient performer.

While some pieces lacked depth and were candidly oriented, the overall tone of the concert was a gleaming reminding of the talent that resides in Philadelphia and echoes the ethos that if you want to see yourself represented, then you must represent yourself.

Archiving experiences of the female body, the Femme Collective not only revealed conditions of the feminist iconography, but was also staged potluck for sourcing the gendered self.