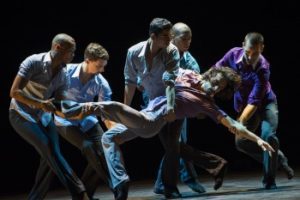 Ballet Hispanico returned to the Annenberg Center stage this month with highly theatrical concert pieces showcasing their technical skill in contemporary ballet, as well as their dazzling range of Latin dance forms. The New York based troupe was founded in 1970 by visionary director Tina Ramirez, winner of National Medal of Arts and Hispanic Heritage Award for Education. BH’s troupe of 16 performs here for the first time since Eduardo Vilaro, longtime principal dancer with the company, took over the director reins when Ramirez stepped down in 2009. Along with serious themes, Vilaro programs this concert run with ballets full of charm, artistry and unexpected movement mayhem.

The show opens with choreographer Annabella Lopez Ochoa’s ‘Somberisimo’ (2013) created for six Ballet Hispanico’s men, set to dance music by Banda Ionica with vocalists Macaco el Mono Loco and Titi Robin. Ochoa likes to work with dance props- apples in her BalletX piece “still@life” and rosebuds in her PAB ballet “Requiem for a Rose”- In both cases these objects were more distracting than anything else.

With Somberisimo, Cuban bowlers proved to be the coolest dancer prop for Ochoa. The dancers hurled them around with a juggler’s precision. A mise-en-scene has them locked in a shadowy slow-motion ensemble set to nourish soundtrack music from the 70s movie thriller Klute. The gents amp up their balletic prowess with explosive tours en l’air, aerial fan kicks and tilted layouts. Ochoa’s mixes the pyrotechnics with spicy transitional steps from mambo, rumba, samba rhythms that burn the floor. When all the hats end up on one dancer, he buckles under the heat.

‘Bury Me Standing’ choreographed by Ramón Oller in 1998, is a stunner that seems overloaded with colliding ideas, but is a substantive dance mosaic mapping the nomadic travels of Spanish gypsies of Romany.

Principal dancer Christopher Hernandez bare-chested and in blue print tights cut with velvet bolts, walks with stoic boldness, as the rest of the ensemble craw behind in a cluster together as Hernandez performs a steely, lyrical solo. A series of cryptic and mostly somber vignettes unfold.

There are lighter moments. The women inch across the stage on their knees, chattering and crossing themselves frantically and it almost seems sexist until the men appear on the other side on their knees doing the same thing. As Nancy Heller reported in her Inquirer interview with Vilaro, the piece refers to an old gypsy saying: “Bury me standing . . . because I’ve been on my knees all my life.”

Throughout, Oller using the whole company in intricate, but fluid male –female lift sequences and jumps that have the couples colliding mid-air. An acrobatic dance between a couple is hypnotic, but strikes as incongruous filler, as the woman floats into sculpted poses while hoisted on the bottom of the man’s feet.

The vivid costume design by Willa Kim added drama with the men in structures vests and the women in muted rose and steel blue skirts, finished with silk flamenco ruffles, that flare out or cling gorgeously to their bodies.

One key unlocking ‘Bury Me Standing’ is its Spanish Gypsy music, mixes of percussive soundfields, Klezmer music igniting folkloric dance, as well as cultural symbolism. The most captivating sections are the adagio variations of flamenco steps and hand geometry. Flamenco artistry is laced throughout the piece. Oller choreographs captivating adagio variations of flamenco hand movements and ensemble unison.

The end sections have the men lift Hernandez serenely and floating him through the line of women. But the there is a more disquieting coda as the lights change and a red hue is cast over the company running frantically in place as the curtain falls.

Gustavo Ramerez Sansano’s ‘Flabbergast’ (2001) deals with immigrants assimilating in a new country. At first the dancers are staggering around the stage, moving in a scene of violence and mayhem. But things lighten up as the music shifts to a funsies playlist by Juan Garcia Esquivel. Suitcases are rolling onstage and everyone is a delirious traveler in a cartoon danceland canoodling to the intoxicating martini lounge music by Juan Garcia Esquivel.

During the spasmodic group dancing a metallic beaded curtain drops and the party really starts. A Latin big-band arrangement of “Boulevard of Broken Dream” blares as a quartet of men do a floppy group cha-cha trying to impress a disinterested woman as she saunters off. The company even breaks into a show belting musical number as they peek seductively through the curtain. It is all inspired dance funsies that ends too soon. In fact, THE END had to be projected on the stage curtain for us to realize it was over. Ballet Hispanico can’t come back soon enough to keep this party going.