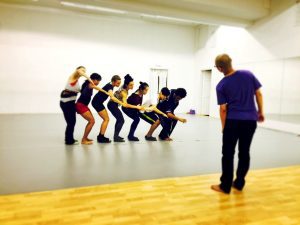 In 1957, the Organization of College and University Managers (OCUM) was formed to address the educational roles of the arts on College campuses. As the membership expanded to a variety of other organization, there was an inevitable name change to the Association of College and University and Community Arts Administrators (ACUCAA) in 1973. By the mid 80s, colleges and universities no longer had dominant memberships, prompting another name change to Association of Performing Arts Presenters (APAP) in 1988.

Today, APAP continues to provide a wide range of services to industry professionals by offering resources and presenting individual artists and professionals in the field, at national venues.

On Friday January 15th, members of Koresh Dance Company and Kun-Yang Lin/Dancers (KYL), performed in a APAP showing, demonstrating the on going jostle for dance to be sponsored, supported and presented – even if the company is 25years old.

The dancers of Koresh performed excerpts from the company’s repertoire but also whet the appetite of potential presenters with a preview of their new work 23:Deconstructing Mozart set to premiere on March 10th, at The Suzanne Roberts Theatre. The company showed why they are one of Philadelphia’s best by giving life to the pulsating rhythms of the music, allowing that earthiness to seamlessly combine with the ballet based vocabulary of Koresh’s choreography. The seasoned dancers energized the space and new member Vanessa Guinto, held her own next to company veterans Melissa Rector and Robert Tyler.

While Koresh’s choreography was intensely physical, Lin’s works were deeply inspired by the traditions and aesthetic of Eastern Asia and had a more tranquil appeal. As an ensemble, the dancers of KYL were hyper aware as they moved with ease and precision, working as a unit to maintain the integrity of the work. They too also previewed a new work Dreamscape, one of a trilogy of new works commissioned by Grand Valley State University and set to premiere in Philadelphia at The Prince Theater on April 14th.

What struck me as I watched these two companies, was how their cultural identities (Koresh from Israel and Lin from Taiwan) shaped the content of their work. This reinforced my belief that dance is a language that connects by breaking down barriers.

Although aesthetically contrasting and stylistically different, the two companies had things in common; gifted dancers, engaging repertory, and choreographers who continue to strengthen the field by offering relevant, attention-grabbing, and sometimes controversial work that should be seen nationally.

While a respected platform, I’ve often wondered if APAP serves its purpose of providing support and exposure– especially to companies that refuse to adhere to popular aesthetics and lack commercial appeal. I continue to wrestle with the possibility that presenters may be seduced by companies that align themselves with the mainstream and in so doing overlook those that encourage ingenuity and fuel discourse that promotes dance as a vehicle that can be used to tackle issues of race, class, and gender.