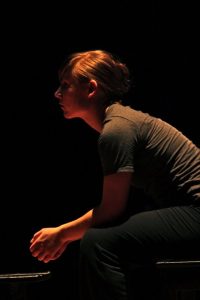 By Gary Day for The Dance Journal

For those of us who are hopelessly captured by the call of a muse, but who are, shall we say, opportunity disadvantaged, sometimes it’s best to just do it yourself. Just grab the bull by the horns, put your own money on the line, and through your own blood, sweet and tears (and often your friends and family’s too) put your work out there for all (or whoever will come) to see. That has always been the motivation behind fringe festivals.

Sometimes it’s important to do it that way, rather than spending one’s life with endless “if only’s” haunting you. It’s vital for an artist to get experience and exposure in order to develop and mature, to receive the feedback of audiences and critics in order to move past the indulgences of youth. And it serves as a crucible, too, separating out those who are merely dilettantes from those who really mean it. For some, it can serve as the path to professionalism—many artists end up having stellar professional careers via the self-production route.

Caroline O’Brien clearly understood the value of DIY when she produced (curated is actually the more precise term) her show SOLOnely Together and presented it for a single performance on January 15. It’s a collection of short pieces by a number of different emerging artists from various disciplines: dance, music, spoken word—all on the general subject of loneliness. Of course, each artist comes at the subject from a different perspective, with a different definition: personal, social and economic isolation are all examined.

As is to be expected from an anthology format put together by a group of (well-meaning) amateurs, quality and effectiveness varied wildly from promising to unfortunate. The program was structured to have Ms. O’Brien start things off, and that each performer would, in effect, hand off the spotlight to the next performer of a different discipline.

Of the dance sequences, the choreography was uniformly basic and derivative, but the dancers’ conviction could not be mistaken. Standouts were Ms. O’Brien herself and Asya Zlatina, both of whom showed significant promise. Other dancers included Marcie Mamura, Meredith Stapleton and Antonia Z. Brown. Each gave a brief dance interpretation of the program’s theme of loneliness and isolation, though Ms. Brown’s frolic with a pile of socks left me baffled.

The solo musical interludes included Connor Przybysezewski on trombone, Derrick Jackson on keyboard, and Steven Davit on saxophone, each of whom played an original composition, with Mr. being the most technically accomplished. Most effective of the musical pieces was Derrick “D9” Branch, the sole vocalist who accompanied himself on bass guitar. His rendition of his own song was moody, bluesy and emotionally effective.

Of the spoken word segments, these included Pervis Upshur, Paul Norris, and Rayon Cauthen, who performed a rap-style piece from his seat in the audience. It was difficult to judge the quality of their poetry, since all tended to mumble much of their presentations. Unfortunately, sincerity was about the best thing going for them.

The program was presented in a tiny venue on South Broad Street. The small space was packed with about twice as many people as there were chairs, and there was no ventilation. I have to admit, my patience was tested, standing for an hour in increasingly hot and stuffy air; nevertheless, I was glad to be there to witness the performance. If you are a real lover of the arts, you need to rough it now and then. We should all seek out small performances in out-of-the-way venues, with folding chairs and track lighting. You never know when you might witness and be encouraging true talent at the beginning of a fruitful career, the proverbial gem worth digging for.