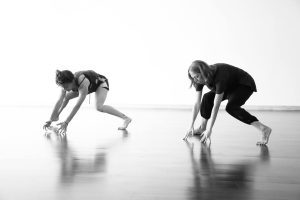 Lunch hour traffic at Reading Terminal Market is never easy to navigate. An environment that caters to Philadelphia’s rural and urban food communities, the Market can be a volcano of activities. Between diners searching to find the perfect sandwich and tourists seeking specialty foods, this marketplace is a nest for diversity. With its architecture, size and history, it also serves as the house for FringeArts’ latest partnership.

A twice a month curated series aimed at introducing the general public to some of Philadelphia’s most innovative, interesting and engaging performers, Fringe in The Market is one of FringeArts’ initiatives to bring arts to the people.

In such an environment, audiences are exposed to excerpts from dance, music, and theater pieces that are sometimes still in their investigatory phase. On January 12th, the Megan Flynn Dance Company was presented and it didn’t take long to feel the energy surrounding the performance, as the dancers warmed up on the marley floor.

I remember seeing the company in their debut performance at The Fringe last year, so I was eager to witness their latest offering, not knowing if I would see new or familiar pieces. Regardless, I welcomed the opportunity for live art to interact with the public, lowering the walls of pretense, inviting the audience in.

In a solo choreographed by Megan Flynn in collaboration with dancer Meredith Stapleton, dancer Stapleton skittered onto the stage. Titled What Fits in a Fish Bowl, she had a free flowing energy and was light in her carriage. Like shopping in a market, her skipping was reminiscent of someone frolicking while holding a basket, moving from vendor to vendor. Was this intentional? Who know! In a moment of static suspension, she stood on relevé for an extended time. She leisurely lowered herself to the floor where she abruptly collapsed. As her chest met the floor, the rest of her body yielded before flipping once, no twice. With a frantic display of quick, jerky joint twitches, Stapleton was chaotic but never messy. She controlled each descent and ascent with the ease of a well-oiled machine.

She is Standing, a solo choreographed by Flynn in collaboration with Sarah Braviak, was danced with delicate nuances by Braviak herself. Layer by layer she peeled away her clothing. Left in a leotard and a pair of black biker shorts, Braviak repeatedly lengthened her body as a connection between steps. When first I saw this solo, I struggled to understand why she undressed and what was her connection to each pile of clothing but this iteration provided no clearer answer. While Braviak’s technique shone, the attempt at story telling was missed, and I was still confused and no more connected.

Choreographed and danced by Flynn, To the Ends was a tender solo that eloquently showed her exquisite lines. With arms that traced the space, she carved her kinesphere with precision and grace. Each pas de basque, allowed her to use her body as fabric in the wind.

Amidst the restaurants, fish stands and ice cream kiosks, there was a marley full of magnificent dancing, reminding us that art strengthens community. A gentleman beside me asked, “that was good right?” I smiled and said, “Aren’t you glad you were eating lunch at Reading Terminal today, otherwise you would have missed it.” He responded, “you’re right…. that was a nice surprise.”

Like Koresh Dance Company in After 5 at the museum, more dance companies are connecting with their audiences by doing non-proscenium performances. I’m not sure what FringeArts had in mind when they initiated Fringe in the Market, but by presenting Megan Flynn Dance Company at the Market, they have taken dance to the people, and in so doing, exposed a new audience to the world of art.