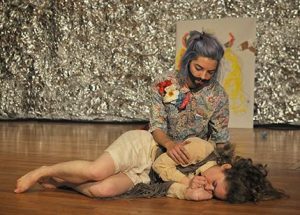 On the first Monday of each month, short performances curated as previews, are presented at FringeArts Scratch Night. Served to wet your appetite, the excerpts are offered, hoping you’ll return for the main course. (I’m chuckling at the food reference as the show is usually followed by a $5 artist dinner provided by the contemporary French brasserie La Peg).

In the first installment of 2016, four previews were presented. House at the End of the World’s Plant Me Here, had five young ladies in various hues of green carrying different props as they entered the space; a trunk, bags, miniature piano and a ukulele. They appeared expressionless – no melancholy. One performer started distributing citrus fruits – oranges, maybe tangerines – to her cast mates. One young lady proceeded to sit in the trunk as the orange distributor peeled her fruit, releasing the skin into the trunk housing her colleague. Like preparing a well-balanced meal, I assumed the actions of pouring tea and playing with the ukulele, all served to bring the elements together for a perfect bite, but something was missing.

As with any work that is presented as an excerpt, seeing the creator’s vision sometimes prove difficult especially without text (although one performer did sing). As a preview, I would argue that the section presented might not have not been accessible. I couldn’t stop myself from wondering if the full-length version will have text. Either way, I am optimistic that relationships between performers will be established as they continue to develop the work.

While I have never seen the duo of Chelsea & Magda, I have seen pictures of the bearded Magda that rendered me curious. An except of their new project, The Shame Portrait, which was developed with Jaime Alvarez, showed photographs that portrayed the dualities of shame and pleasure.

Wearing only bra and panties, a provocative image of Magda’s Shame Portrait was projected on a screen. Titled “Sexual Aggression”, the photo showed Magda on the floor with her legs spread open. I couldn’t decide if the audible laughter from the audience was discomfort or humor but I found myself compelled by her story – at least by the photo.

In her Shame Portrait Magda grimaced with angst and aggression. She explicated that aggression is her shame and is often confronted by people who describe her as aggressive. Additionally, she illuminated that while aggression was her shame, she also felt pleasure in power.

At the end, the duo encouraged those interested in being a part of their Shame Portrait project, to visit their website www.everybodygetinthecar.com. I was tempted to submit to the project but I was also afraid of what my portrait would reveal. Maybe, next time.

In Chris Davis’ excerpt from in Juan Winfield-Escutia or The Mexican American War, a butcher’s play, Davis explored the Mexican American War and the last stand of the Niños Héroes (Boy Heroes). A short but interactive excerpt, Davis included some audience members, handing out a pair of binoculars, a basketball (what he would later comically refer to as the canon ball), flashlights and a cooler. His humor was dry but his delivery was intoxicating.

Any performances in which the audience is asked to participate, has the ability to bleed success if orchestrated properly. Davis is moving in the right direction and although I’m not sure how much of it was improvisation, Davis had a great sense of comedic timing that made his invitation to participate, worthy of an acceptance.

The night ended with Fire Drill’s Time Had a Job. The dance duo dressed in a black and white patched unitard, left a slight off putting taste in my mouth. Imagine sitting through a performance that used strobe lights for a continued 8 minutes. Short samplings of music coupled with choreographed blurbs and the flashes of light, left me dizzy, and not with excitement.

With free admission, Scratch Nights serve dual purposes – to offer audiences and opportunity to experience the Fringe line up and for artists to share their process with the public. A win, win for all, especially if the showing is followed by the possibility of conversations and an artist dinner*…. for $5!