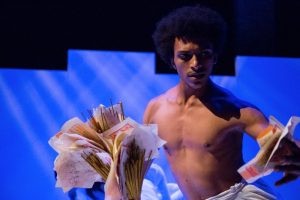 At the world premiere of Kun-Yang Lin’s Home/S. 9th St., executive director Dr. Ken Metzner offered joss paper to patrons gathered to celebrate the culmination of what has been a process of research, story circles, workshops, and movement exploration. The napkin-like square of paper held a sea of contrasts – textured and smooth, colorful and plain, opaque and transparent (in parts).

In an email exchange, Dr. Metzner explained that in many Asian cultures, Joss papers are burned as an offering to one’s ancestors in order to seek guidance in times of indecision. He clarified that this is done with the hope of achieving a positive outcome and to offer solace to the person praying.

The paper, a metaphor for life, held my attention as I questioned the meaning of the red shimmery symbol on the front. That process of discernment became symbolic to my own personal journey especially since that journey took me from Jamaica to America; a new land, a new home.

Recently, choreographers Ronen Koresh and Silvana Cardell share their own immigration stories by crafting evening length works (Cardell from Argentina and Koresh from Israel). Adding to the conversation, choreographer and director Lin (from Taiwan) used his personal immigration story plus stories from residents living along Philadelphia’s 9th St., to create the narrative of Home. It was a ritualistic revelation, highlighting a common thread among immigrants; fear, displacement, hope, sadness, assimilation, and ownership of identity.

Set designer Britt Plunkett created a sterile white room that offered no indication as to the room’s purpose. I settled on believing that the starkness was a canvas for creating possibilities – where Lin’s immigration stories could be painted.

A slow moving Brian Cordova cascaded towards dancer Evalina Carbonell who was coiled in a fetal position on the floor. Step by step he planted one foot before the other while slowly rotating the gesture leg. Almost ghostlike, he appeared otherworldly, as he wafted through the space. An unhurried exit made room for Carbonell to drift on the diagonal, lunging in to the space as she lengthened and slid along a strip of light. At one moment, she extended her leg to the side, inhaling as she surrendered to the moment – in my opinion, a decisive moment to leave home.

Dancers Helen Hale and Jessica Warchal-King were humorous in their oration of anti immigration rhetoric in support of alleged nationalism. Holding a flashlight like object their faces, they became slightly animated in their appearances. Each argument was delivered with comedy and sarcasm causing the audience to respond with laughter.

In an assimilated interrogation session, Lin’s ten dancers sat in chairs that were placed upstage while being questioned about their intentions in the country.

“What is your name?”

“How long will you stay?”

“What is your occupation?”

Watching the dancers, I noticed how very little vocalization the small-framed Liu Mo had to do. I wondered if it were his discomfort speaking or his discomfort speaking a language that wasn’t his native tongue. Regardless, he moved like a skillful swordsman performing a martial arts ballet and I soon forget about his speaking voice. He used one arm to slice through the space and the other he used as a shield. With each jump, he soared through the air as if approaching a doomed target and landed each jump with a soundless punctuation.

Through movement, text, and live audio, Lin delivered a story that explored what it meant to move from one country to another; to leave one home and create another. In the final tableaux there was an amoebic huddle while Cordova entered the stage carrying a bouquet of the textured joss paper. Held together by sticks of incense, the joss papers had the writings, musings, drawings (about home and community) of the artists, collaborators and a number of people who participated in the story circles for this project. Cordova floated from stage left to stage right shaking the bouquet, and with each tremor, the burly scent of frankincense aerated the space as the papers floated to the ground.