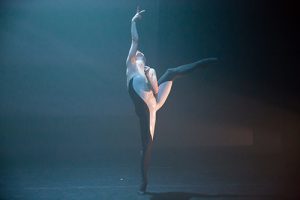 Building on the success of Nicolo Fonte’s “Beautiful Decay,” which premiered to critical acclaim for its treatment of aging bodies in 2013, BalletX opened its 10th anniversary with another evening length program created by the Brooklyn Native. “Beasts” drew inspiration from the very same nature vs. nurture debate that has perplexed political philosophers and sociologists for decades (not to mention my first year anthropology students). It asks us to consider what makes us the way we are: biology or culture? And although the answer seems clear (it’s a combination of factors) Fonte took this familiar theme and turned it in choreographic gold.

Hovering above the stage is a huge white screen. Designed by 2015 MacArthur Fellowship recipient Mimi Lien, it is angled to such an extent that it might as well be the door of a large spaceship. Dancers have to writhe beneath it, crawling towards the audience on their backs, mouths wide open as if taking their first breaths.

The “beginning of time” theme is overt, overly so at times, with dancers “learning” to stand, mastering bipedal movement and discovering sex, in all of its various forms. Interestingly, dance proceeds sex in Fonte’s cosmology, with dancer Daniel Mayo suddenly (and somewhat involuntarily) tapping his foot to Ella Fitzgerald’s “Let’s Do It,” as he “discovers” his own sense of rhythm. This inspires the hysterical antics of a sex crazed Chloe Felesina, who can’t let Mayo go. (Perhaps Jane Austen was right when she said “To be fond of dancing was a certain step to falling in love?” Or was Fonte instead creating an animalistic mating dance?)

The amoeba-like references to human evolution felt a bit too clichéd at times but in the second act, where nature gave way to nurture and cultural trappings replaced biological urges, BalletX delivered the sometimes gorgeous but sometimes ugly-on-purpose, thought provoking program that has catapulted the company from a local favorite to a key player in the world of contemporary ballet.

There are pointe shoes and sequined gowns; tuxedos and 5 waltzing couples twirling from one lift into another. But this artificial beauty gives way to violence; guns enter into the equation, follow shortly thereafter by seduction and murder.

Lien’s set provides the perfect backdrop: it’s no longer a spaceship but now a screen of windows. It is the costumes however, designed by Christine Darch, that give Fonte’s primordial-turned-“civilized” meaning, inviting the audience to consider the difference between sex and gender, and how both biology and culture play into their determination and performance. Although Wednesday night’s audience laughed at the arrival of Richard Villaverde onstage in a black tutu, his solo took on a deeper meeting, especially when juxtaposed to Andrea Yorita’s “traditional” woman in a hyper feminine white tutu.

The dancing was phenomenal; it always is, but Patti Smith’s “Smells Like Teen Spirited2” brought it all together towards the end of the second act: the nature vs. nurture debate may have given way to an interactionist perspective but we still have a long way to go and thanks to Fonte, this debate is just as beautiful as decay was under his treatment.