Eastern University is one of only five Christian colleges in the United States that currently offers a major in dance. It is the only such program offered by a Christian college in the greater Philadelphia region.

Perplexing to current dance students and parents is the fact that the dance department at Eastern has had continuous growth and profitability since its inception. Started more than 25 years ago by Dr. Karen Clemente, who currently chairs the Dance Department at Ursinus College, Eastern University’s Dance Department has been directed by Janine Bryant for the last three years. Ms. Bryant started her term with four dance majors and six dance minors.  During her time as program director, the department expanded to twenty dance majors and fifteen dance minors.  In fact, dance is currently reported to have the fifth largest student enrollment of all of the nearly 50 majors at Eastern.

Eastern’s Dance Department has successfully collaborated and taught co-cooperatively with other majors on campus, including Bio-kinetics (fitness through ballet), English (poetry and movement), Music (interactions between dancer and musicians), Theater (musicals, theatrical events, productions and exercises) and the Education Department (arts integration in the classroom for future public school teachers). The department has also been responsible for providing dancers for weekly chapel services through Eastern’s Dance Ministry.

The Dance Journal has learned that the dance department has in fact contributed positively and significantly to the revenue of the University. To date, it has employed only two full time faculty and one-part time administrator, with the remaining dance faculty being part-time adjuncts. A source in the university administration, who has requested anonymity in an email to the Dance Journal, indicated that the expansion of the dance department was “causing a strain” on the availability of necessary facilities to accommodate the expansion of the dance department. With widespread cuts, no further funds could be made available to meet the “needs of a growing department”.

Dance majors at the university, in a statement to the Dance Journal were quick to point out that the program is comprised of only female students and is the “only all female program on campus”. They go on to state that Eastern University’s administration is predominantly male, “holding misogynistic values that have even prevented them from attending any of the dance performances or concerts on campus”. In other words, this decision to eliminate the dance department was conducted without ever “evaluating the results of the program first hand”.

This would not be the first time that current University President Robert Duffett’s actions have been called in to question. Back in June of 2014, Eastern University alumni called on the president of the school to remove his signature from a letter urging President Obama to exempt religious institutions from an order that bans discrimination based on sexual identity. While Duffett explained that Eastern did not discriminate against lesbian, gay, bisexual, or transgender students or employees, he was quoted by Philly.com as strongly maintaining that “no government has the right to determine theological views and practices of religious institutions”.

The Dance Journal was also sent information from an anonymous source, deemed to be a parent of a dance major, that faculty at Eastern were ordered to report any other dance employment outside of Eastern to the Dean, and then asked to resign from these other jobs so they could ‘focus all of their energy’ at Eastern University.  Shortly after this action, the departments only dance administrator was fired without notice and the entire dance department was set to be cut.

For now, the dance department continues to operate with a skeletal staff until all current dance majors can be “passed through”. All future auditions for the department have been cancelled and any further dance performances or showcases are at best questionable. Stephen Welsh, the only other full time faculty member besides Janine Bryant, will teach through his contract, which ends in May.

While news of the program’s elimination has just recently been divulged, students on campus have already begun to mobilize in protest of this action. Many question whether the current position of the University is reflective of a strong Christian fundamentalist belief against dance, viewed in the same light as other conservative social stances. Other’s hold to an argument that this once again a misogynistic decision made by a male dominated administration. Perhaps, this is just a general reflection of a growing national trend occurring in other universities across the country, in which arts departments have been downsized or eliminated. The ultimate question still remains, what value do we place on the performing arts in our high education systems as well as in our own communities?

11-19-2015
The Dance Journal reported earlier today that  tenured faculty at a pre-scheduled faculty meeting at Eastern University were planning to call for the resignation of President Duffett and Provost Iddings in response to the recent departmental cuts.  This report was made based on information provided to us from three current faculty sources. We have since learned, that tenured faculty were not able to sufficiently organize to in fact take this action at the meeting today.  However, dance students at Eastern did attempt to meet with President Duffett this morning to express their concern. Instead, they were informed by his assistant that he was unavailable and that they needed to wait until the Dean had a chance to speak with the department on Friday.  The students have suggested that President Duffett also attend this meeting  with the Dean and department so they can be heard. No further response has been provided.  The students plan on organizing a petition in order to keep the dance department intact.

RESPONSE TO COMMENTS MADE

In response to several comments that “the dance program is not closing”.  I reiterate my opening statement, “Under the guise of budget and faculty cuts, it was determined that the current dance program was no longer viable as Eastern University seeks to streamline costs and ensure that the university remains profitable.”  The fact remains that the dance major will be eliminated by Spring semester. All full time faculty will be let go with the exception of the current department director.  Dance auditions have been cancelled and the dance minor will most likely remain to appease the current dance students and parents. One can only surmise where this will lead once the current students in this program have finally graduated.

As to the comments calling in to question my reports from students, parents and yes, faculty about fundamentalism, conservationism and misogyny in the administration (NOT the Eastern University community),  I would simply add that in the absence of transparency or any clear statement from the University to faculty, students, parents or the community lends validity to their concerns and opinions.  In a time where it has been all too easy to cut arts budgets, I would simply defer to the comment made by Alum – “the arts enrich our spirits and humanity beyond the measurable costs laid out in the budget”.

Copy of letter circulated by President Duffett with regards to announced cuts. 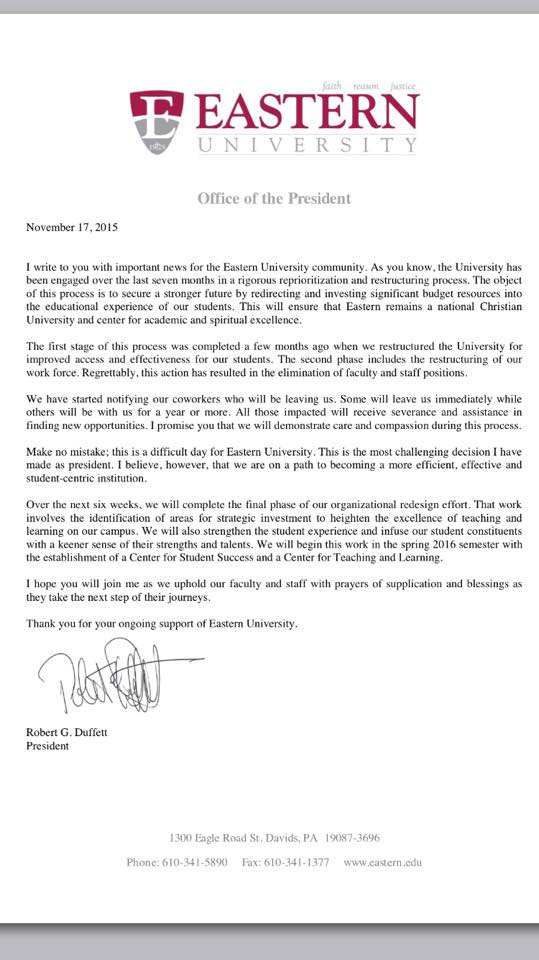 15 replies on “BREAKING NEWS: Eastern University is set to close its Dance Department”