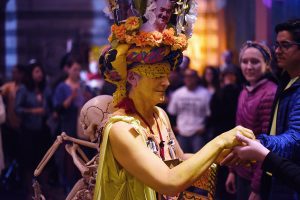 Widely celebrated throughout Mexico and acknowledged around the world by other cultures, November 1st is a day of honoring deceased loved ones known as Dia de los Muertos (Day of The Dead).

In 1989, recent Pew Fellow Merián Soto, created Todo Mis Muertos (All My Dead), for her grandmother Mamita, Maria Eulogia Pagan. After the passing of her dad, Soto felt compelled to restage the work, presenting it in venues such as Judson Church in New York and the ICA in London. Last year, Soto lost her mother, so it only seemed fitting that this year’s iteration was a ritual of dancing memories with a generous offering of love.

At the Fleisher Art Memorial in South Philadelphia, Soto appeared blindfolded, wearing a marigold-kissed dress and headwear adorned with flowers.

Carrying a skeleton (La Calaca Flaca) on her back and a wooden chair on her left shoulder, she allowed the crowd to guide her in this game of trust.

Barefooted and blindfolded, she was ushered along—a mussel on the riverbed being swept forward by seaweed.

Some of the audience was familiar: they meandered around knowing exactly what to do – gently leading her, then following her.

Others were less sure.

Quietly, she approached the altar at the end of the procession, placing the chair on the floor. Still blindfolded, she knelt.

She swayed a knotted bag of dirt before releasing its content, using the soil to wash her skin. She squatted with her hands on her knees, a metaphoric representation of a sacred Mother Goddess: a grand plié with meaning – feet connected to the earth and pelvis low to the ground. She trembled her fingers, resuscitating all the trinkets that were pinned to her marigold dress.

She removed her bony accomplice from her back before engaging in a melancholy waltz.

Arms around necks, arms around waists, dancing with the dead – the dance of the dead.

She placed the skeleton on the floor and with her back to the audience, she undressed…. freeing herself from that which limited her.

In the soil, next to the bones, she laid herself bare.

Now a part of the altar, she became a candle waiting to be lit. Her journey led her to this place of stillness. Minutes passed. Finally, she wrapped a sheet of fabric around her naked breast. She disappeared into the audience, but not before receiving one last embrace from someone moved by her offering.

Her body was a medium for communication. Soto transported the viewer using her physicality—even in stillness. A traveling performance altar, she shared Todo Mis Muertos, which had very little to do with death but much to do with a spiritual acceptance of life’s journey.