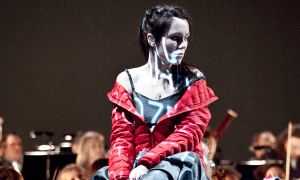 For the past month, ten old pianos were strewn throughout Philadelphia and Swarthmore; four in Philadelphia and six in Swarthmore. Oddly out of place, they beckoned passersby close to them – if only to tap on their keys. Out of tune and hoary, they offer the duality of being both string instruments (because the sounds are made with strings), and percussion instruments – like a drum (because the strings make sounds when something hits them).

Memories of Chopin – his music, his life

Devoting himself uniquely to writing works for the piano as a solo instrument or in combination with other instruments, Fryderyk Chopin’s music comes alive with the striking of each chord that lingers after one’s fingers have left the keys. Knowing the pertinence of the piano in his compositions, I was apprehensive as to whether Chopin Without Piano would adequately embody his catalogue of work for which the instrument was paramount.

The Chamber Orchestra of Philadelphia was dispersed across the stage of FringeArts while looming downstage right was the striking image of the lone piano that was never played.

Lebanese-Polish conductor, Bassem Akiki and Polish actress Barbara Wysocka, entered from behind a closed door to an enthusiastic crowd. They greeted the audience, before going their separate ways – him to direct the orchestra and her, to take her seated place in front of the piano as if preparing to play. 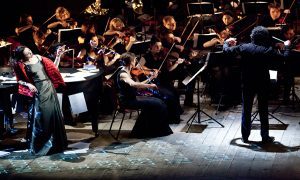 He waved his baton, leading the orchestra as they expelled Chopin’s Piano Concerto No. 1 in E minor, Op. 11 and she waited with impending fervor before her cue to bellow in Polish.

She was an impressive tour de force.

She ransacked the space with her physicality and I was astounded by her intense vigor as she dynamically delivered her riveting monologue.

Her voice rang, piercing the space with urgency. She recited with rhythm and speed as if imitating the intonations in Chopin’s composition. Comedic, historically poignant, rifted with poetic politics, and at times sad, the scripted blend of Chopin’s letters and music criticism from some of the finest writers and thinkers of our age, provided Wysocka her source. She was an emotional pendulum and the musical flow of her recitation created harmony as she rode on the melodic waves of the orchestra.

Chopin Without Piano took the symphonic inscription, eliminated the piano part and replaced them with a thrillingly melodramatic monologue that surfed the tuneful sails of the well-oiled orchestra. I never missed the piano, instead, a new experience was created and Chopin was resurrected.

So what is Chopin Without Piano? A cerebral re-imagining of classicism done right!