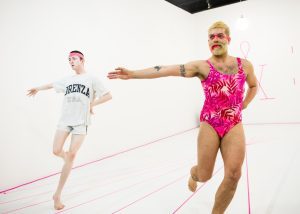 FringeArts presents the first two parts of a suite of queer pieces by one of the U.S.’s most provocative artists

The highly influential choreographer and performer Miguel Gutierriez returns to FringeArts with Age & Beauty Parts 1 & 2. Age & Beauty Part 1: Mid-Career Artist/Suicide Note or &:-/ runs November 10-11 at 8pm, and Age & Beauty Part 2: Asian Beauty @ the Werq Meeting or The Choreographer and Her Muse or &:@& runs November 13-14 at 8pm. These two irreverent celebrations of the artistic process take place at FringeArts’ waterfront headquarters, 140 N Columbus Blvd. (at Race St.). Tickets cost between $15 and $29 and are available by phone at 215-413-1318 or online at FringeArts.com.

Age & Beauty is a suite of queer pieces Gutierrez created over the course of three years that addresses the representation of the dancer, the physical and emotional labor of performance, tropes about the aging gay choreographer, the interaction of art making with administration, the idea of queer time and futurity, and mid-life anxieties about relevance, sustainability and artistic burnout.

Age & Beauty Part 1: Mid-Career Artist/Suicide Note or &:-/ is a duet for 43 year old Gutierrez and 25 year old performer/dancer Mickey Mahar. It follows from a packed set of precise unison dances to an irreverent and celebratory corruption of orderliness, suggesting modes of communication and relations where hyper-emotional affect is not only the conceptual and choreographic core of the performance, but also “the only hope for continuing in this fucked up world.”

Age & Beauty Part 2: Asian Beauty @ the Werq Meeting or The Choreographer and Her Muse or &:@& deals with Gutierrez’s long-term creative/work relationships and features performer/choreographer Michelle Boulé, arts manager Ben Pryor, and lighting designer Lenore Doxsee. The piece uses retrospection and archive to demonstrate how relationships, money, and flights of fancy are at the center of all art making.

“I have also always been interested in the way that performance – as a time based art form – forces us to confront the reality that we are all experiencing the passage of time, together,” Gutierriez says of his work. “The performance is not locked or fixed or out of time. You are watching a person who has history, story, context, future. Time is embedded into the way that person moves, into what they know or have learned. None of us escapes that, whether or not we are dancing bodies.”

Miguel Gutierrez lives in Brooklyn and makes performances. He has been called “one of our most provocative and necessary artistic voices” by Eva Yaa Asantewaa at Dance Magazine. His work engages persistent philosophical questions about the search for meaning and joins a legacy of process-focused experimental dance while drawing on influences such as endurance-based performance art, noise music, ecstatic experience in social and religious rituals, the study of mind-body somatic systems, and various histories of spectacle including Broadway and queer club performance. His pieces include enter the seen (2002), I succumb (2003), dAMNATION rOAD (2004), Sabotage (with Jaime Fennelly 2001-2004), Retrospective Exhibitionist and Difficult Bodies (2005 Bessie Award), myendlesslove (2006), Everyone (2007), Nothing, No thing (2008), Last Meadow (2009 Bessie Award), HEAVENS WHAT HAVE I DONE (2010) and And lose the name of action (2012) and Storing the Winter with Mind Over Mirros (2013).

His work has been presented by venues such as the Brooklyn Academy of Music in NYC, Festival D’Automne and the Pompidou Centre in Paris, ImPulsTanz in Vienna, Walker Art Center in Minneapolis, MCA Chicago, PICA’s TBA Festival in Portland, the Flynn Center in Burlington and the Brooklyn Academy of Music. He has received fellowships from the Guggenheim Foundation, Foundation for Contemporary Art, United States Artists, Lambent Foundation, and New York Foundation for the Arts, as well as support from MAP Fund, Jerome Foundation, Creative Capital, and the NEA. He has been an artist in residence at Maggie Allessee National Center for Choreography, Lower Manhattan Cultural Council, Centre Choreographique National de Montpellier, Baryshnikov Art Center and several universities.

He has created commissions for Philip Adams’ BalletLab in Melbourne, The Fondue Set in Sydney, LabCo in Pittsburgh, Fauxnique/Monique Jenkinson in San Francisco, and Movement Forum in Salt Lake City. He has engaged a variety of research based projects such as artist exchanges in Russia and Hungary that were supported by DTW’s The Suitcase Fund, a process exchange project in Melbourne with choreographer Luke George supported by Arts House, a drive through the American deep south with choreographer Alex Ketley where they met, interviewed and performed for strangers supported by MANCC, and a research into improvisation in Philadelphia with Headlong Dance Theater and Pig Iron’s Dan Rothenberg. In addition he has created one-off pieces for a host of venues, such as a collaboration with Jenny Holzer for the Boston ICA, a series of performative interventions that were part of the Regarding Warhol exhibit at the Metropolitan Museum of Art, an hour-long performance for Courtesy the Artist’s residency during Performa 2013 at Recess Gallery, as well as many other situations. He spent a week performing outdoors at the 2013 Roskilde Music Festival as one of the Holy Sisters of the Church of Beer, a project initiated by Jeremy Wade as part of his Maximum Service series.. For his work in John Jasperse Company he received the first Bessie for ensemble performance.

He is a current faculty member of Hollins University’s MFA dance program and NYC’s Movement Research. His book WHEN YOU RISE UP is available from 53rd State Press. His work is discussed in Jenn Joy’s book The Choreographic, out from MIT Press. He invented DEEP AEROBICS, an absurdist workout, which most recently has been used to warm up audiences for The Knife. He sits on the Artist Advisory Board for Danspace Project, volunteers as a mentor for TDF’s Open Doors program and is training to become a guild certified practitioner of the Feldenkrais Method. He studies voice with Barbara Maier.