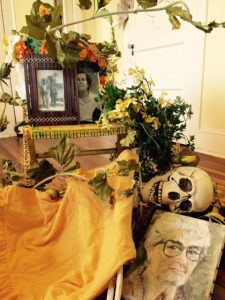 On Sunday, November 1st at 5pm, Fleisher Art memorial presents Merián Soto in Todos Mis Muertos (all my dead ones), a solo performance offering to the dead and the living, as part of the third annual Day of the Dead Celebration, which brings together the community of South Philadelphia in celebration of this centuries old tradition honoring the dead.

Todos Mis Muertos is a performance altar offering to the dead as well as the living. The dancer, blindfolded, becomes a constantly transforming altar. This critically acclaimed work was created in 1989 and has been presented internationally in venues such as El Museo del Barrio and Judson Memorial Church in NYC and ICA in London, UK.

In addition to her performance, Soto is collaborating with journalist Leticia Nixon and artist Valeska Garay to create an elaborate traditional altar piece dedicated to the disappeared women of Juarez, in Fleisher’s historic Sanctuary space. Audiences are welcome to contribute their own offerings to the altar.   The celebration will also feature performances by traditional Aztec dance group Cenzontle Cuicatl and mariachi Pedro Villaseñor, and traditional food.

Merián Soto/Documenting Place & Self: Videos 2014-15 opens at iMPeRFeCT Gallery in Germantown on Saturday Nov 7. The opening reception is from 6-9PM. This solo exhibition of new videos consists of two, 3-channel video installations, that collect some of Soto’s recent self-documentation of performance practice in Philadelphia’s Wissahickon Valley Park, and in Bogliasco, Italy, where Soto was a Residential Fellow at the Liguria Study Center in Fall 2014.

Choreographer Merián Soto has been developing somatic based work since the 1980’s in New York, Philadelphia, her native Puerto Rico, and beyond. She is the creator of Branch Dancing and Modal Practice, somatic creative practices which she teaches at Temple University in Philadelphia, where she is Professor of Dance since 1999. Soto is the recipient of numerous awards and grants including a New York Dance and Performance Award “BESSIE” for sustained choreographic achievement in 2000, a Greater Philadelphia Dance and Physical Theater Award “ROCKY” for her One-Year Wissahickon Park Project in 2008, a 2014 Bogliasco Fellowship and a 2015 Pew Fellowship in the Arts. 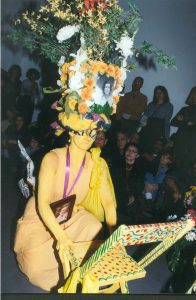