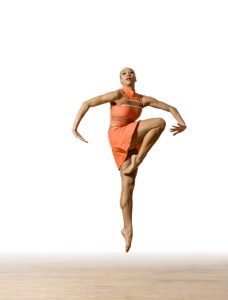 Boasting a youth ensemble, an apprentice company and a main performing company, The Philadelphia Dance Company is committed to celebrating and preserving African American traditions in dance. Synonymous with modern concert dance in America, Philadanco also offers quality training and performance opportunities to dancers seeking an environment where a part of dance history lives.

The 46th annual choreography showcase, “Danco on Danco” was one such opportunity for emerging choreographers to flex their artistic muscle and create new works or restage old ones, using the dancers in the school or the company.

Nine pieces ranging from ballet to jazz styles, graced the stage of the Performance Garage in an attempt to showcase the works of these choreographers while student dancers gain performance experience in front of live audiences.

Rhythm in motion……with a dash of charisma

Some tappers create rhythms with their metal-soled shoes as the shuffle and flap through a routine, trying to connect to the music as they work to maintain a consistent tempo. In Welcome To Essence Night Club, choreographer and dancer William Burden was successful at accomplishing all this – and he did it with swagg. Reminiscent of a younger, leaner, Savion Glover, Burden didn’t just tap with his feet, he tapped with his entire body. Wearing a black vest and bow tie, Burden effortlessly combined eloquent footwork with mild theatricality a to create a fully realized piece set to Justin Timberlake’s “That Girl”.

Choreographed by youth ensemble’s director Adryan Moorefield, Shades had some challenges as some of the young dancers were not technically proficient enough to handle the power of the pointe shoe. From untied ribbons to failing to fully achieve verticality when standing on pointe, this piece was not the best at showcasing the strength of the youth ensemble. Although the dancers gave a valiant effort, they struggled to demonstrate adequate command of the classical ballet vocabulary.

A Conversation choreographed by Kim Y. Bears- Bailey was an incandescent tribute to everything woman. Donning backless dresses in shades of purple, red and blue, Clarricia Golden, Yazzmeen Laidler, and Sierra Stewart were striking in their display of sass and technique. Committed to every hip sway, their well-trained bodies told unapologetic stories that made them appear fearless. As the ladies walked upstage to assume their final pose in a blue hued silhouette, I couldn’t help but think about all the little girls from the school who were watching this piece and felt at home in their own black female dancing bodies.

With three pieces that highlighted company members (and all three were solos – one of which was Burden), the majority of the show featured the apprentice company and the youth ensemble. With the programming heavy with dancers from the school, a $30 ticket for entrance seemed hefty as the price tag was comparable to a seat at the Kimmel Center, Merriam Theater, or FringeArts, where internationally known artists continue to grace the stage.

Watching this new crop of dancers confirmed my belief that Philadanco is offering some of the best dance training in Philadelphia.

“Danco on Danco” allowed dancers to wear the hat of choreographer while being responsible for the full production quality of their piece. Although there were some pieces that were more successful than others, a concert where students and professionals can assemble to share a stage for the love of dance can only be concert worth supporting.

Cultural traditions live in the aesthetics of the Philadanco dancer, but also present were the pathways they’ve created for inclusion and diversity. As the stage glistened with dancers from varied ethnic backgrounds, I was reminded that movement can indeed, unite us.