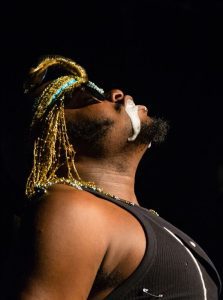 Created and performed by Jaamil Olawale Kosoko, Black Male Revisited delved deep into the many facets of the black man’s psyche while examining the intersectionality of race, gender, and sexuality.

Books by James Baldwin, Brenda Dixon Gottschild, Toni Morrison, among others, strewn through the space offering some semblance of intellectual endorsement and validation. Photographs of black men lay in disarray on the floor while the gloomy visual of an obituary—Abdul Jaamal Muhammad’s—sliced through me. The sadness I felt was followed by hopelessness, anger, and disappointment. There was a young man walking around with an iPad, live streaming the installation to a projection screen as the viewers inhaled everything around them. I stood in the space, not knowing what to think as Kosoko, a black man dressed in all white, gradually birthed himself into the performance arena reciting:

The one the river didn’t keep; the one dangling from the rope.

In a subtle movement phrase, Kosoko performed a back cambré.

He created unidentifiable shapes with his body.

He shook, he took a breath.

As he opened his arms, his head began trembling as if it were the dial on a speedometer.

He wrapped his arms around his body.

His body: a container of lived experiences, of painful stories, of stubborn memories.

At one point he wailed and the bitter sound of the weeping black man escaped his body. Later, he strolled around the room wearing high top sneakers shouting: These are my brother’s shoes. His dead brother.

Throughout the performance, Kosoko’s every move was recorded.

Like a store clerk suspiciously following someone around their establishment, the iPad carrier tracked Kosoko as he commanded the stage and later patrolled the room.

The follower kept his distance, but kept up the surveillance.

In a quick, visible costume change, Kosoko removed the white suit and donned a hooded vest and sweatpants. In a romp-shaking homage to black butts everywhere, Kosoko lowered the sweatpants to reveal metallic bootie shorts with the words “Black Power”, written across his derriere.

An act of reclaiming the power of the black butt.

A simple gesture of self-acceptance.

The work moved from edgy and groundbreaking to disturbing and unsettling.

Kosoko drinking from a bottle labeled “bleach.” The suggested ingestion of a household cleaner sent an avalanche of audible gasp through the audience while Kosoko sat center stage and began convulsing.

It was hard to watch.

What followed was even harder: body fluids disgorged from his mouth. Vomit. Saliva. Mouth foam. “Was this planned”? I asked myself. Maybe the question should have been, “Was this necessary?” Amidst repulsion, disgust, discomfort, concern, I quietly reflected on the journey that brought him to that place.

Radically unpredictable and critically significant, Black Male Revisited swept away pretenses and political correctness to reveal the complexities of identity and the emotional chaos that present itself when telling these hidden stories of the self.

Even with a surplus of references, props, tangential interruptions, multi-media inclusions, and chaotic outbursts, Black Male Revisited was salient, poignant and authentic.