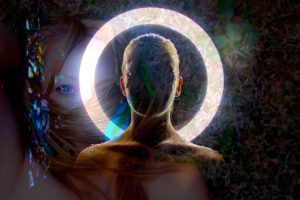 Human Realm is a physical theater performance duet exploring the depth and potential creation of human consciousness in relation to the questions and extraordinary possibilities of outer space.  Philadelphia Artists Lindsay Browning and Kathryn Raines in collaboration with Philadelphia Mosaic Artist Isaiah Zagar will Premiere “Human Realm | Earth” in October 2015 and continue with the Premiere of “Human Realm | Space” in May 2016.

In Springof  2014, Browning met with Zagar about potentially rehearsing and creating a piece of Dance Theater to be performed in his South Philadelphia Arts Space. A performance that would no doubt be inspired by his enormous paradise of mosaics. The creation process for Human Realm began in Spring 2015. Browning & Raines were molding a performance on the 2nd floor of the warehouse while Zagar continued his work each day to complete the ground level. Zagar has played an active roll in rehearsals offering ideas, images and incredible support of the project.

As you enter the warehouse you are overwhelmed by the enormity of it all. The sheer volume of work within the walls is inspiring. An entire universe within a small South Philadelphia block.   Without Zagar’s space, Human Realm | Earth would not exist. It is a project inspired, built and intended to be born inside this wonderful world of colorful mosaics.

There is a loneliness felt at the moment of acceptance that finding any other life forms beyond those on Earth is uncertain.  We are in the Universe in a Galaxy in a Solar System in a warm lush perfectly balanced planet packed full of life, full of humans harboring individual mobile Universes.  In “Human Realm | Earth”, we are exploring the extraordinary existence of a flying Bird and a falling human.  We are navigating the creation of a self, working to understand the extreme tools we as humans use to mold and unintentionally entrap our own potential.

Lets indulge in the beauty of our Earth and one of it’s most energetic species, Birds.  Why are Birds important?  Wes Craven says “Birds have lifted our eyes to the skies.  They’ve shown us that flight is possible and limitless.  The Bird hovers and soars, dives and displays, and takes us from one end of the plant to the other in a single, impossible burst of energy and purpose.  Like the canary in the mine, they hold the planet up to us like a mirror.” 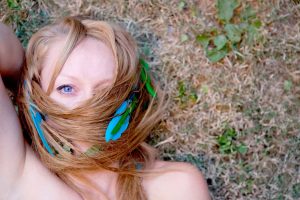